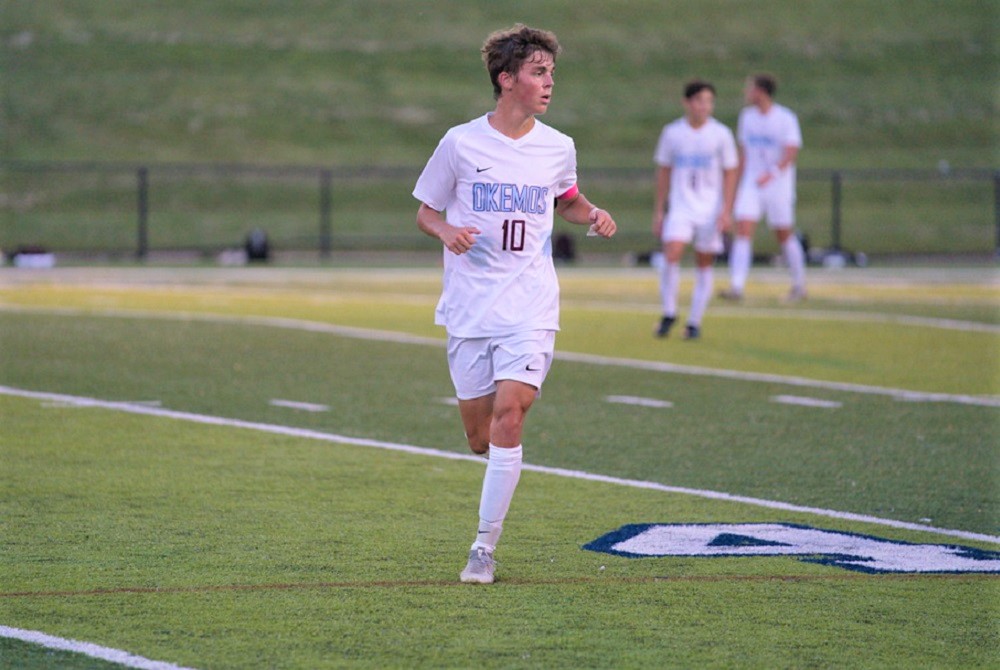 Guggemos was 5 months old when his father Brian coached Okemos to its last MHSAA Finals championship, when a 2-1 victory over Utica Eisenhower clinched the 2004 Division 1 title. But as Jack's all-state career moves toward its conclusion, the senior midfielder has the program only two wins away from returning to the championship match.

Jack Guggemos played a leading role in Okemos earning the No. 4 ranking in Division 1 heading into this postseason, and despite plenty of defensive attention has remained a prominent contributor as his team has outscored its first four playoff opponents by a combined 18-2 margin. He scored a goal in Okemos' 4-1 District Final win Saturday over No. 11 East Lansing, following up his three goals Oct. 19 in a 4-0 District Semifinal win over Portage Northern. Guggemos broke the school record for single-season goals with his 34th during an Oct. 5 win, and he's amassed 44 goals and 13 assists total this fall. Okemos defeated No. 7 Traverse City West on Tuesday and travels to face No. 8 East Kentwood in a Division 1 Regional Final on Thursday. 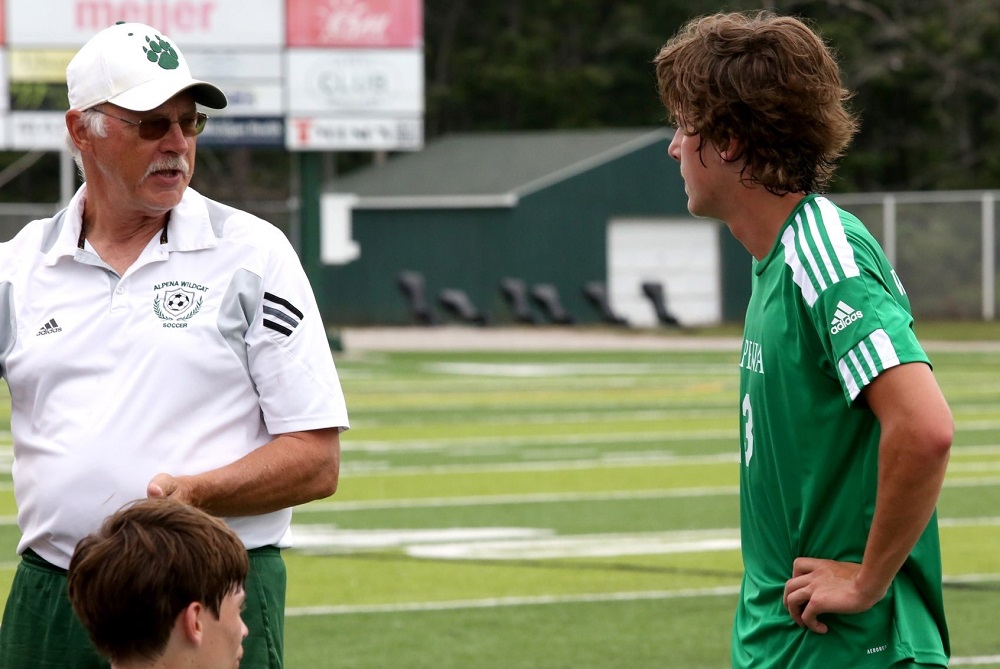 It wasn’t long ago that Alpena boys and girls soccer opponents took their long bus rides to play the Wildcats expecting an easy win, and most likely by securing the victory by the eight-goal differential rule, commonly known as the “mercy rule.”

Worse yet, the Wildcats also had to take those trips across the northern part of the Lower Peninsula, as well as northern and southern journeys of two hours, dreading thoughts of experiencing yet another shortened game.

Those expectations started to change in 2011, when Tim Storch, arguably the most decorated coach in the history of Michigan high school soccer, took the reins of the Wildcats’ boys and girls programs.

Storch made the move after retiring from Troy Athens as a teacher and coach of the Redhawks’ boys and girls soccer teams.

Slowly but surely, Alpena’s mercy losses disappeared – and wins over their Big North Conference opponents became reality. Under Storch, the Wildcats went from the cellar to challenging for titles.

But now, Storch is showing some mercy on the Big North – perhaps an early Christmas present. The conference schools won’t see him on sidelines any longer. He’s retiring – again.

Storch is doing so after leading the Wildcats to wins over all conference opponents except Traverse City West. The Wildcats did get a tie this fall against the Titans, one of the BNC schools that regularly makes a deep postseason run, as Alpena stayed in the league title race most of the season.

“When I came to Alpena it was about trying to make the program relevant in the school, the community, the area, the BNC and northern Michigan,” Storch recalled. “We got to that point after some growing pains.

“Early on we took our lumps, and we were mercied by everybody,” he continued. “By the end we were competitive with everybody.”

Storch, who started the Athens soccer programs from scratch in 1981, won eight Class A or Division 1 Finals titles with the Redhawks. He’s near the top of the lists of the winningest boys and girls soccer coaches in the state. The last of his 1,109 wins was a 3-1 victory over Bay City Western during this fall’s postseason.

The Wildcats also beat conference opponent Cadillac in their District opener. They finished 14-6-3 on the season.

"Tim has had a legendary career as one of the most influential figures in Michigan high school soccer over the past 40 years while having an enormous impact on thousands of student-athletes,” Jonker said. “Over the past decade, Tim helped to dramatically raise the overall level of play in the Big North. 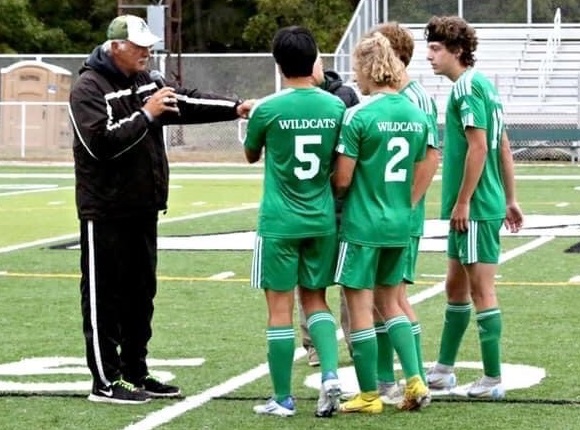 “He is one of fiercest competitors I have ever coached against, but he is also one of the most genuine and empathetic coaches I have ever encountered,” Jonker continued. “I feel fortunate to have been able to build a competitive relationship with him and call him a friend."

Storch’s last game with the Alpena girls also was a District Final, a 3-0 loss May 31 to West.

Storch is proud of what the Wildcats accomplished, noting logistics — unlike in southeastern Michigan — were a big challenge.

“We were an island,” Storch said. “We were big school in the middle of nowhere.

“We couldn’t get together and have any kind of summer program with other communities because they didn’t have soccer, and if they had soccer they were at a Class D or C level that was way beneath what we were playing in the Big North.”

They are among those who will miss the successful coach.

“Tim leaves Alpena in better shape than when he arrived, and that is the true mark of a great coach and administrator,” Wilson said. “He has been an outstanding representative of Alpena High School, both as a soccer coach and as an athletic director.

“Tim brought a level of stability and expertise and was well-thought of by players, coaches, and community members.”

Griesinger, who has led the Titans to considerable postseason success and upheld BNC dominance since taking over the West program eight seasons ago, was particularly impressed with Storch’s energy and passion for his players evident in every match.

“Tim is one of the most respected coaches in the state, and what he has done for the soccer communities in both Troy and Alpena is not just commendable, but also something that every high school coach should hope to emulate,” Griesinger stated. “Storch is a stand-up guy, and all of us other coaches in the BNC should consider ourselves lucky that our journeys in the sport overlapped.”

Storch is leaving Michigan high school sports as they face a shortage of referees and qualified coaches. He’s not certain of the exact reasons for it, but he points to time constraints and pressures faced on and off the field.

And, he knows the days of a teacher starting a career, coaching sports and sticking with it are long gone.

“My wife has always said I was a dinosaur,” Storch said with a chuckle. “Back in my day, even if you had family and kids, you still made time for coaching.

“Coaching was part of my fiber — it kind of defined me.”

Storch is quick to point out “soccer coach” was just one of three hats he wore, along with history teacher and friend.

“I’m Mr. Storch to my students,” he recalls telling his student-athletes at Athens. “I’m Coach to my kids, and I am Tim to my friends.

“They are three different hats; I learned how to wear them and how to balance them.”

Storch looks back to all the friendships he’s made around the game of soccer – with former players, fellow coaches, and referees – with excitement for the future.

He is also keeping in mind former players, referees and coaches who have passed on.

“It is kind of humbling when I think back all the years (to) coaches, referees and players I have interacted with,” he said. “We’re all here for a finite time.

“We need to make the most of it and hopefully leave the place a better place when we leave.”

PHOTOS (Top) Recently-retired Alpena soccer coach Tim Storch, left, talks things over with one of his players. (Middle) Storch, holding the microphone, elevated the Wildcats’ girls and boys programs since taking over both in 2011. (Photos courtesy of Therese Shaw.)