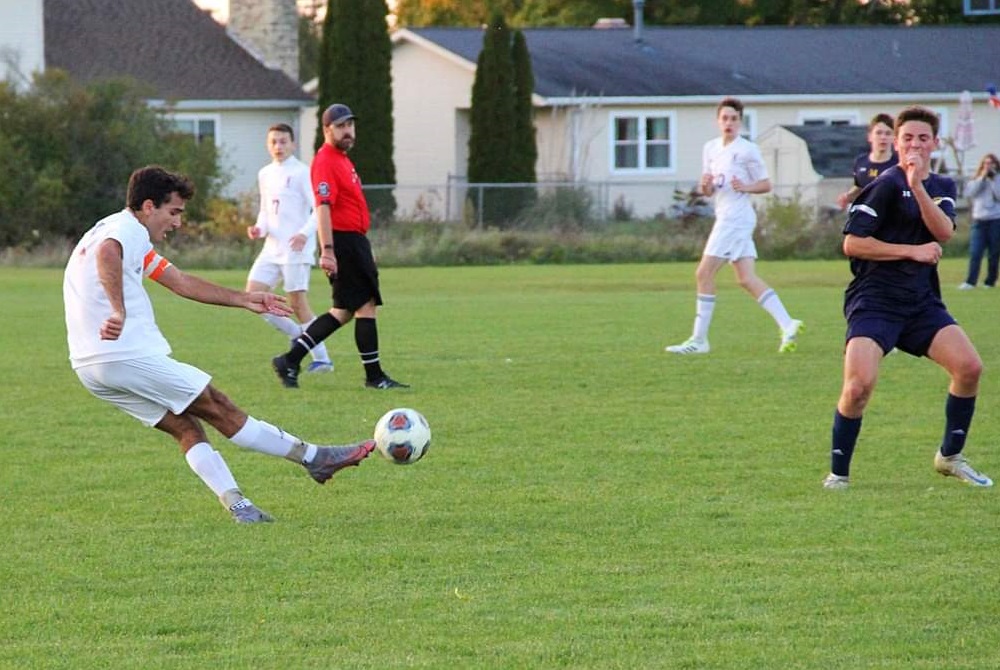 But when the Kings won their first District title recently, in just their fourth MHSAA postseason, he did feel they had proved something to those outside the program.

“I think to a certain level, yes, (we had to prove) that we can actually win the title, that District title,” the Calvary Baptist coach said. “I think, too, it was so exciting because there are several players that have played in virtually all of (the program’s postseason) games.”

Led by its five seniors, Calvary Baptist defeated Saginaw Valley Lutheran 2-1 on Oct. 21 to win that Division 4 District title. It came after the team had advanced to the District Final in each of its previous three tries.

After seeing plenty of success in the Michigan Association of Christian Schools, the Kings made the leap to the MHSAA and participated in their first postseason in 2019. That year, they lost to Roscommon 1-0 in the District Final. They fell to Bad Axe in the District Final each of the next two seasons.

“The first three years, we’d been super close,” senior midfielder Charley Tomko said. “The last two years we lost to Bad Axe in the District championship, and going into this year, my goal was to win a District championship. We didn’t beat Bad Axe in the championship game, but we beat a really solid team to win it. Going into the season, this was my goal – this was our team’s goal – and we figured it out and were able to execute.”

Tomko and classmates John Adams, Isaac Wallace, Dyllon Ouderkirk and Lucian Snyder make up the core of the team. Most of them have been playing soccer together since middle school, and have known each other since kindergarten.

“It really helps,” said Adams, a senior center back. “I’ve known our keeper (Snyder) since we were 7 years old. It helps because we’ve played with each other for a lot of years. We’re friends on and off the field, and obviously it really helps when we’re on the field because we communicate and work together.” 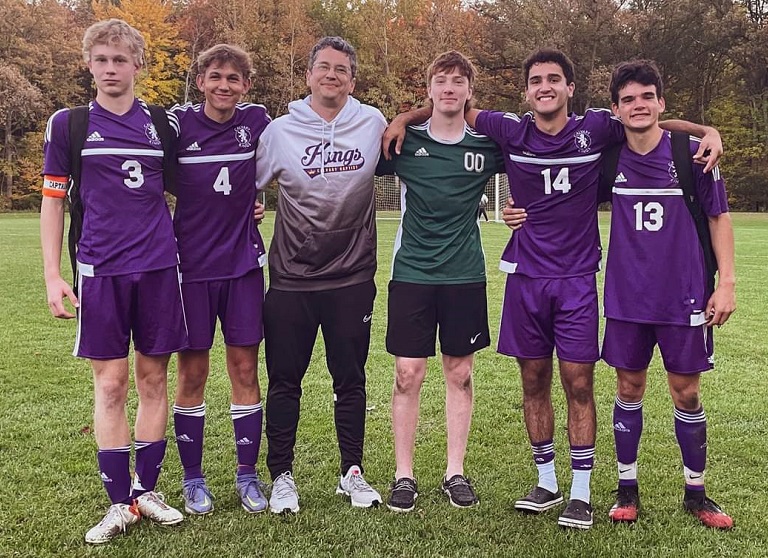 The five seniors are also spread throughout the four levels of the Kings’ formation, which helps create a balance that Day said is the strength of his team.

Snyder plays in goal, with Adams at center back and Wallace at right back on defense. Tomko is an attacking midfielder, and Ouderkirk plays forward, where he’s netted more than 20 goals this season.

“It really does help to have an experienced player throughout all parts of the field,” Adams said. “We all understand how all of us play.”

The bond between those seniors – and the entire team – has been formed and strengthened by much more than their play.

During their sophomore season, their friend and teammate Stephen Kipfmiller died after a battle with leukemia. While his memory remains a constant in their minds, the Kings also do their best to continue to honor him outwardly. His number 19 was retired by the program, and their captains armbands are orange, representing leukemia awareness.

“That group has gone through a lot of adversity not just on the field, but off of it,” Day said. “Seeing how, even through struggle and hardship, there’s things we can do on and off the field that bring joy. Winning a title is temporary, but at the end of the day, it was fulfilling, too. There’s this bond we’ve formed around the sport, and it’s been great to be able to honor our friend Stephen and his life.”

Kipfmiller’s brother, Caleb, is a coach in the program, and his parents are regulars at the team’s games.

“When Stephen passed, we were sophomores, and since that year, the brotherhood between the seniors and all of our teams, and even our school, has grown an immense amount,” Tomko said. “His parents are still involved with our teams, they come to every home game. It’s really cool to play for God’s glory, and also to have that memory of Stephen. He always worked as hard as he could. Just the way he led the team, too, it’s something I look up to now. I remember Stephen being one of those silent leaders who was always calm and collected.”

No matter what happens in Wednesday night’s Regional Semifinal against Leland, or possibly after that, this year’s Calvary Baptist team, and specifically its group of seniors, have already cemented its legacy.

“We put in so many hours of work to improve our game and improve our chances in the season,” Tomko said. “When we first entered the MHSAA our freshmen year, we had a really solid group of seniors and juniors. Going into that, we did kind of set a high standard. It’s so cool that four years into being in the MHSAA, we won a District, and hopefully more. Looking back, it’s really cool to see how much this team has accomplished.”