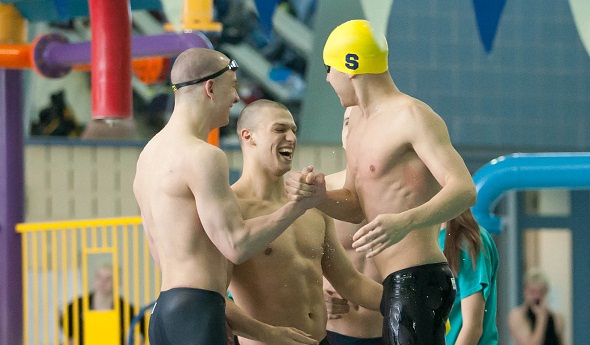 HOLLAND – Although they were led by a trio of seniors who each won two individual events, a fourth consecutive MHSAA title was anything but a sure thing for Saline at the MHSAA Lower Peninsula Division 1 Final at the Holland Aquatic Center.

With points at a premium, the Hornets rallied and in the final event finished in fourth place in the 400 freestyle relay to clinch the championship.

“There was a lot of pressure, but I actually enjoy it,” Ehrman said. “We knew we had to go fast in every race, and we had to win. When you are put under that kind of pressure, you know you have to perform.”

Ehrman did his part and then some for the Hornets as he won two individual titles and was part of two relay teams that also won.

Ehrman teamed up with Boland and fellow seniors Michael Bundas and Lucas Allen to start things off in a big way Saturday by winning the 200-yard medley relay in an all-division Finals record time of 1:30.01.

His success was something the Hornets were able to count on like clockwork since he joined the team his freshman season.

“Josh is a champion swimmer,” Saline coach Todd Brunty said. “The only races he lost during his high school career were two races his freshman year to a nationally-ranked swimmer.”

The Hornets’ key race Saturday was the ninth, the 200-yard freestyle relay. Ehrman teamed up with Bundas, Whitener and fellow senior Stefan Koberl to capture the championship in 1:23.92, another LP Division 1 meet record.

“When we won the 200-free relay, our guys believed they could do it,” Brunty said. “The door was still open, and that was all we needed was that crack to get through.

“Being a four-time state champion feels pretty good right now. It was a hard-fought win. Brother Rice is a very good team, and to go through the adversity that we did on Friday says a lot about this team. We didn’t have some of our best swims on Friday, and we had about 40 points to make up going into today. But the guys stayed steady and stayed strong, and they were able to overcome that deficit.”

Another key to success for the Hornets was the performance of their divers. Three Saline divers finished among the top 11, giving the team key points needed to erase the deficit.

They complemented well the efforts of the trio of senior leaders who amazingly were part of eight of the 12 race championships. 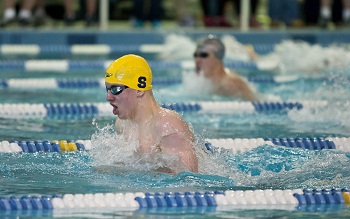 Saline senior Michael Bundas added to the medal haul as he won the 50-yard freestyle in 20.96.

“I was really happy for Michael,” Brunty said. “He gave up baseball to focus on his swimming. He loves baseball, and it takes total dedication for someone to do that. He really stepped up for us today.”

Not all of the records at Saturday’s Finals were broken by Saline swimmers. Runner-up Birmingham Brother Rice’s 400-yard freestyle relay team set an all-division record. Senior Patrick Nodland, sophomores Gust Kouvaris and Mark Blinstrub and junior Joe Krause came into the meet seeded fourth, but saved their best for last as they turned in a time of 3:03.78.

“They really stepped up,” Brother Rice coach Mike Venos said. “We have one senior on that relay, and he inspires the team. Patrick Nodland just does a great job of getting everyone inspired and ready to go. I never, ever doubt my swimmers. I know what they are capable of.”

Brother Rice pushed Saline to the limit and carried on the program’s history of excellence. The Warriors have won eight MHSAA team titles since 1994, their most recent in 2007.

A nationally-ranked club swimmer, Arakelian decided to go out for high school swimming this season, and was more than happy he did.

“Oh I’m very happy I decided to come out,” Arakelian said. “I just decided to try it for a change. It’s a lot of fun, and I like the team atmosphere.”

Arakelian helped Stevenson to a third-place finish as a team as he also took second place in the 200-yard IM and was a part of the 200-yard medley relay and 400-yard free relay teams that also finished second.

“This was an incredible feeling,” Arakelian said. “I’m planning on coming out next year, and I’m very excited about next year.”