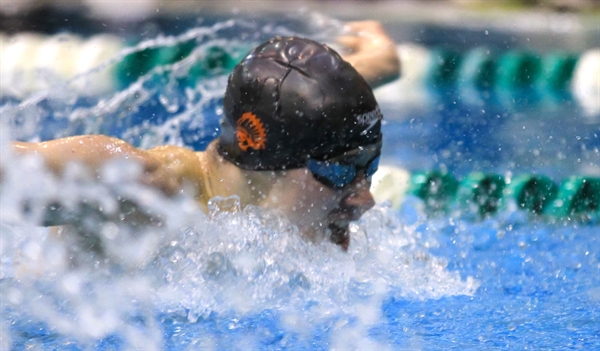 YPSILANTI – It certainly was not by design, but it seemed like the Birmingham Brother Rice swimmers did not want to take the top step on the winning podium without a teammate by their side.

Brother Rice led from start to finish Saturday in the MHSAA Lower Peninsula Division 1 Swimming and Diving Finals at Michael H. Jones Natatorium on the campus of Eastern Michigan University

And the Warriors did it without a single individual champion.

“We have done that quite a few times in the past,” Brother Rice coach Mike Venos said. “It’s almost a tradition around here, and it makes my job easy because these kids know everybody gets to contribute.

“I think that’s what makes us strong. They come in and they are mentored that it’s a whole team effort.”

Last year, Brother Rice dominated the meet, winning by an amazing 143 points. This year, the Warriors finished with a 111-point margin over runner-up Holland West Ottawa.

Brother Rice would not return to the top spot on the podium until the final event – the 400 freestyle relay. Kouvaris, sophomore Rudy Aguilar, junior Bobby Powrie and Blinstrub made it a repeat championship in 3:02.58.

“It’s good to win as a team,” Kouvaris said. “We’re a family. We all swim together, and we all train together. For me in the 100 backstroke, standing next to one of my teammates (Alex Margherio, who finished fourth) was the best feeling in the world.

“It feels amazing to be standing up there with these guys.”

“The guys I finished second to are unbelievable,” said Blinstrub, who plans to swim at the University of Pennsylvania. “It doesn’t upset me at all. They are going to Notre Dame and Stanford. They’re incredible guys and incredible swimmers, so to get second to them is fine.

Aguilar’s second-place finishes included setting a school-record in the 200 freestyle (1:39.57).

“It has been a pleasure swimming for Brother Rice,” he said. “I was fortunate enough to swim the 400 free relay - that’s basically our relay – and training has been really hard, and it showed. 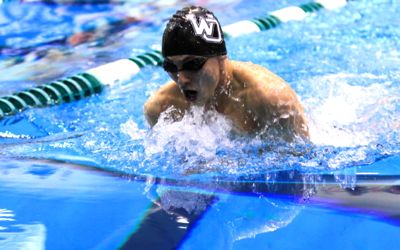 As dominant as Brother Rice was, the meet’s top individual swimmers were Walsh, a Detroit Catholic Central senior who won the 200 IM and 100 backstroke, and Devon Nowicki, a Lake Orion junior who took the 100 butterfly and 100 breaststroke.

Walsh, who plans to continue his swimming career at Stanford, was a repeat winner in the backstroke and improved on his second-place finish from last year in the IM. His winning time of 1:47.26 set an all-division meet record, and his 48.48 in the backstroke set an LP Division 1 meet record.

He did not put the records above the championships.

“It’s always nice to have a record, but a championship is something that can’t be taken away,” he said. “It feels great to have a season of hard work pay off.”

Nowicki’s championships were the first of his career. Last year, he swam distance events, but with a change of coaches, he concentrated more on events that would benefit him in the 200 IM. He was fifth in the 500 freestyle and ninth in the 200 freestyle last year.

“It was different being on top of the podium instead of the lower ones,” Nowicki said. “We changed coaches, and we wanted to focus on something completely different and try something new and see what works.”

Nowicki’s winning time of 53.59 in the breaststroke set an all-division meet record, and he won the butterfly in 48.92.

“The 100 fly I’ve kind of been around but not prominent in, but the 100 breast I’ve been around my whole life,” he said. “Winning the fly was like a happy accident I guess. I’ve always been decent at all the strokes. We just tried to focus more on the fly this year to expand my IM abilities.”

“Honestly, there was no thought going into it other than to just try something new,” said Afrik, who will attend Notre Dame on a full scholarship in the fall. “I have the 100 and the 200 under my belt, so I thought this year I might as well go for the 50, and that’s what we did.”

Afrik also swam the anchor leg for Holland West Ottawa in the 200 freestyle relay. The team finished fourth, but Afrik’s split was an amazing 19.67 seconds, which would have been an all-division meet record had he done it from the first leg of the relay.

“That is the first time I got into the 19s,” he said. “It definitely felt good – a huge milestone that I accomplished. I left it all in the pool. I can’t complain.”

Rockford junior Jake Herremans put on a show in the diving portion of the event. He set a meet record with 528.45 points – the previous record was 494.40 – and left himself looking for more.

“I want to keep hitting those harder dives and make them crisp and clean and possibly try to get my degree of difficulty up a little more,” he said. “I tried to focus on myself and block everything else out. No distractions while I’m on the board, just me in my little happy place.”

Will Brenner of Ann Arbor Huron was runner-up in diving with 500.15 points, and he also was runner-up to Afrik in the 50 freestyle in the event immediately preceding the diving. Brenner’s final dive of an inward two-and-a-half scored in the 7s and 8s and had Herremans clapping as he stood on the board preparing to make his dive.

“That dive was outstanding,” Herremans said. “It was the best dive I’ve ever seen him do. I have to give him so much credit because he did awesome. He’s a great diver and a great kid. I love competing with him.”

Afrik also complimented Brenner and said he was not so sure that Brenner was not going to beat him in the 50 freestyle.

“He had me for the majority of the race,” Afrik said. “I’m not going to lie, I was really impressed with the way he swam. I just turned it up and got him.”

Brenner seemed to take it all in stride.

“I thought it was a great success,” he said. “I thought I nailed the dives. I’m very happy.”

“We were hoping to get the all-division record, but it’s hard to complain with this,” he said. “The 200 freestyle was my first win ever, so it was exciting.

“I wanted to take it out fast and hold the lead the entire race.”

However, with all the stars and records that dominated the meet, in the end it was the depth of Birmingham Brother Rice that ruled the day. The Warriors had 16 individuals seeded and ended up with 11 entries in the Finals and 14 entries in the consolation races.

“I think we had a lot more underclassmen contribute, and we had so many more kids in the consolation finals this year,” Venos said. “It fired everybody up, watching those kids have their day. It was fantastic.

“It’s a tribute to what these kids have built for themselves.”

PHOTOS: (Top) A Brother Rice swimmer competes in the 100 butterfly; five Warriors scored among the top 16 in the event. (Middle) Holland West Ottawa's Mitch Plaggemars swims to 14th place in the 100 breaststroke. (Click to see more at HighSchoolSportsScene.com.)