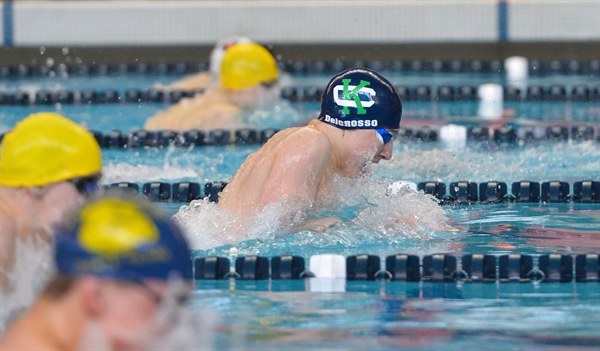 No one was even close.

Behind an uber-dominating team performance, Cranbrook Kingswood compiled an impressive 430 points and won by 130.5.

“It was a little more difficult this season, a lot more pressure,” said Cranbrook Kingswood coach Karl Hodgson, who has guided the Cranes to four top-five finishes in his stint at the school. “I knew we had a shot coming in, and we were in good position after the prelims. But I never thought we’d do this well. We had some incredible performances. I couldn’t have asked for anything more. Not too many teams have won by that many and scored this many points.”

Since the MHSAA split from two divisions to three for boys swimming in 2008, the previous record for D-3 Finals points was East Grand Rapids’ 373 in 2008. Cranbrook scored 297 points in winning its first MHSAA title in 2014. No other D-3 school has eclipsed the 300-point barrier.

On the day, Cranbrook scored in 11 events, captured first places in five, had a runner-up finish, five third-place finishes and a trio of fourth-place finishes to showcase its top-tier talent.

The Cranes also had 14 of 16 competitors score points during their repeat performance.

“We came out and won the first relay, and it kind of amped us up,” admitted senior Frankie Misra. “We kind of (fed) off that energy. We wanted to win it again. We knew we had a strong team coming in, and we had some incredible swims in the prelims. I am so proud of our team — and even prouder today. I don’t think we could have imagined us doing so well.”

Misra, Mitch Buccalo, Andrew Guam and Giorgio DelGrosso joined forces for a 1:33.89 clocking in the 200 medley relay to set the tone. The Cranes continued to pile on the points after that point. Out of 176 total slots, Cranbrook had 27 placers spread over all events. 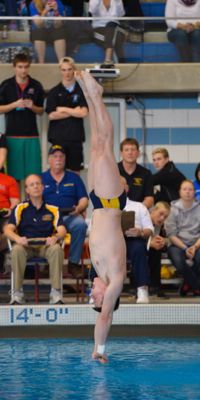 Showing a three-second advantage at Friday’s prelims, the unit of Guam, Alessandro Guttilla, Misra and Buccalo put the finishing touches on the team title by winning the meet-ending 400 freestyle relay in 3:06.15, yet another LPD3 meet record.

“I think when us seniors came in, we helped take the program to another level, and now we have so many good swimmers on this team,” Buccalo said. “We trained so hard for this. We were second two years ago, and we won it this year and last year. We’re not just a (tennis and hockey school), yes sir. Our swimming program is very strong.”

“It’s pretty special being up there representing our school and coming in here and doing so well,” said MacGregor, who had a slow start in the 200 free only to pull ahead in the final two lengths. He also anchored the winning relay.

“I think the sprinting part is my strength. I always pick it up to finish strong,” added MacGregor.

“Last year I was 12th in the 50. I didn’t make it to the fast heat,” said Mangner. “Coming back this year I really wanted to get it, at least try to contend for the title.”

Chelsea’s Joe Smith captured the one-meter diving event (492.95 points), rising up from the second position after Friday’s prelims. The Bulldogs had four of the top 16 finishers in diving, including two of the top three placers.

“I really felt good in the Finals. It was one of my best performances,” Smith said. “I think it’s really special to have four of us from one team place at states in diving. I think it really helped push our team into second place.”

As a team, Chelsea put together another fine outing but still not enough to catch top-ranked Cranbrook. The Bulldogs still placed in the top 10 for the 24th time in 27 seasons.

“They are very good, very deep,” said Chelsea coach Dave Jolly about finishing second to Cranbrook for the second straight season. “We knew we could challenge for second but knew we couldn’t match up with their depth. But I am very pleased with how we competed. We had everyone swim season bests, and we did very well in diving. Having the best diving coach in the state of Michigan (Eric Burris) sure helps. This is the second straight year we had a state champion in diving. Being strong in that event really helped us finish second. We scored (50) points in that event alone.” 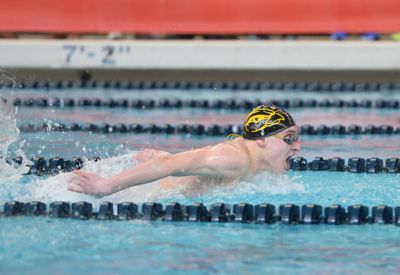 Hamilton’s Alec Nyboer repeated in the 100 butterfly, establishing a new LPD3 meet standard with a 49.15 clocking. Grand Rapids Catholic Central’s Joey Puglessi won the 100 backstroke (50.45) to round out the winners.

“This was the goal all along,” Nyboer said. “I won it last season, too, and I have been down close to 50 (seconds) all season, so it was nice to go under and get the record. I think it would be sweet to get the all-division record next year. I have about two more seconds more to shave off. A lot of work to do.”

Puglessi earned his second title, pulling away during the last length to win by nearly a second. He also won the backstroke as a freshman in 2013.

“I really tried to challenge in my race and see what I could do,” said Puglessi. “I set some high standards for myself and it seemed to pay off today. It’s nice to see all of the hard work pay off and to represent your school in this way.”

PHOTOS: (Top) Cranbrook Kingswood’s Giorgio DelGrosso moves ahead of the pack during Saturday’s Lower Peninsula Division 3 Finals. (Middle) Chelsea’s Joe Smith prepares to touch water during one of his title-winning dives. (Below) Hamilton’s Alec Nyboer repeated and set a meet record in the 100 butterfly. (Click to see more at HighSchoolSportsScene.com.)