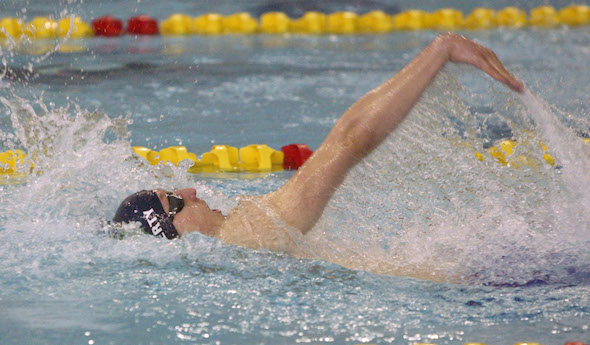 Cranbrook Kingswood finished first at the event that took place at the Holland Aquatics Center with a total of 268 points. Only 41 separated the top four teams. East Grand Rapids, last year’s runner-up, placed second with 255 points, followed by Holland Christian in third with 241.5 and Chelsea in fourth with 227 points.

Cranes coach Karl Hodgson knew coming in that any number of teams could come away with the first-place trophy.

“Division 3 is a lot tougher the last few years,” Hodgson said, “especially this year. In the past, there would be two or three teams that had a chance to win it. This year, there were four, five and even six teams that were very tough and had a shot at it.”

Making the task even tougher for Cranbrook Kingswood this season was the number of talented seniors who graduated from last year’s team.

This title was a major accomplishment for this year’s seniors.

“This is surreal,” said Cranbrook Kingswood senior captain Giorgio Guttilla. “It’s an awesome feeling to win it four years in a row.”

Guttilla credits the team’s can-do attitude for making the difference on the final day.

“The difference was we all had a great attitude going into the Finals,” Guttilla said. “We were determined to win, and it just showed.”

Cafferty claimed the lone individual title for Cranbrook Kingswood as he won the 100 backstroke by almost two full seconds with a time of 50.72.

“It was a phenomenal feeling,” Cafferty said. “It was crazy getting out of the pool and having everybody cheering.”

A sophomore, Cafferty has been a part of two team championships and points to his teammates’ camaraderie as being a key to success.

“Winning back-to-back state titles is a great feeling,” Cafferty said. “For the seniors it has got to be a crazy feeling. We put in tons of work this year. I think we worked harder this year than any other year. Everybody cheers each other on, and everyone wants to see each other succeed. I was not as sure that we would win it this year. I thought we might finish second or third, but to come in first feels amazing.”

East Grand Rapids provided Cranbrook Kingswood with its biggest challenge. The second-place Pioneers received a huge effort from junior Christian Bart. Bart not only won two events, but he also set multiple LP Division 3 Finals records in the process. Bart captured the 50 freestyle in a time of 20.64 and then won the 100 breaststroke in a time of 55.82. 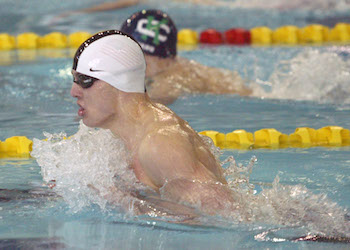 “I’ve been working all year for this,” Bart said. “I’m very happy to have set the records. The competition was very tough, and that is why I posted those times. The races were so close and the times were so good because of the competition.”

East Grand Rapids also picked up plenty of points in the diving competition. Senior Grant Williams took first place as he scored a total of 456.65 points. Pioneers freshman Nick Merritt placed fourth with a total of 428.05.

Holland Christian gave the hometown fans plenty to cheer about as the Maroons placed third as a team.

Junior Skyler Cook-Weeks was one of two individual champions for Holland Christian. Cook-Weeks defended his championship in the 500 freestyle as he took first place with a time of 4:26.96. That time also broke his Division 3 Finals record set last year.

“Last year it was a surreal feeling for me,” Cook-Weeks said. “This year it was a different feeling. What made it special was having my teammate swimming with me. Luke Mason was right behind me, and he finished second so Holland Christian placed one-two.”

With two titles to his credit, Cook-Weeks not only has his sights set on another title next season but also a new record-breaking time.

“It’s just a great feeling,” Mason said. “It’s great being a part of a great team like this with great teammates. It’s been a great experience.”

Senior Rudy Aguilar of Pontiac Notre Dame Prep also claimed a pair of individual titles and set a Division 3 record in the process. Aguilar won the 200 freestyle in a record time of 1:37.37 and also the 100 freestyle in a time of 45.71.

Aguilar edged a familiar face on his way to winning the 200, Cook-Weeks of Holland Christian by less than a second.

“I’ve known Skylar a long time and we’ve been swimming against each other in high school the last two years,” Aguilar said. “The atmosphere here is great and racing against each other made our times faster. I give all the glory to God. I also want to thank everyone who has helped me and my coaches and teammates at Notre Dame.”

Byron Center junior Nolan Briggs captured his first-ever Finals title when he won the 100 butterfly in a time of 49.85. The title was especially sweet for Briggs, who stopped swimming for a while before high school.

“I actually didn’t swim for a year,” Briggs said. “We moved from Holland to Byron Center and then coach Kimble (Don Kimble) got me back in it my freshman year. It was a great feeling being up on that podium. When I was younger I would come here for the Finals. To win my first state title is a great feeling.”