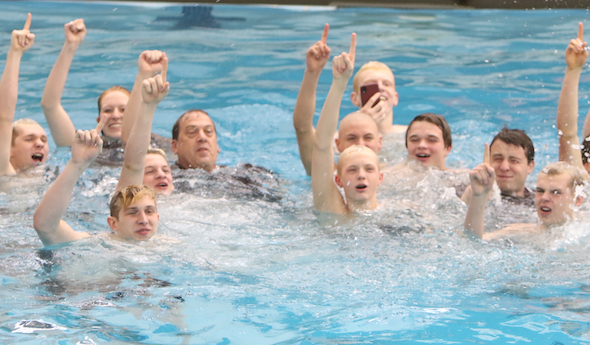 ROCHESTER – Going into the 2019 Division 3 Boys Swimming & Diving Finals at Oakland University, both Spring Lake senior Cam Peel and Holland Christian senior Riley VanMeter had other numbers driving their respective quests to be No. 1.

For Peel, it was a third-place finish at last year’s Finals meet in the 50-yard freestyle that weighed on his mind as he readied to start this year’s ultimate sprint race.

But Peel avenged that memory by capturing his first 50 freestyle championship, in his last chance, in a time of 19.91 seconds. In Friday's prelim, he set the all-Finals record in the race at 19.86, becoming the first in Michigan to break 20 seconds in high school competition.

“I’ve always wanted to win the 50,” Peel said. “That’s one where the more mature guys win, so it’s super hard to win as a younger guy in the event. This was my year.”

Peel – who will go on to swim at University of Michigan – then completed the sweep of the sprint events by repeating as champion in the 100 yards in a time of 43.94, finishing as one of two individual standouts of the meet.

The other was VanMeter, who first won the 100 butterfly in a time of 48.07 – which wasn’t a surprise since he was the top seed going in.

But VanMeter also eyed a title in the 100 backstroke, an event he entered seeded second.

VanMeter surpassed that seeding with a terrific swim, winning the backstroke in a time of 48.95 to edge his club teammate, Joey Wachter of Spring Lake.

VanMeter, who will swim at Alabama, was second in both events at last year’s Division 3 meet. 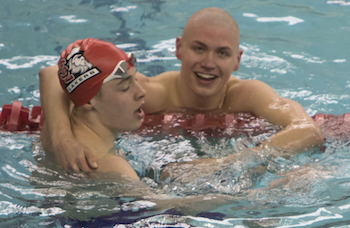 VanMeter was the main standout for Holland Christian, but he certainly wasn’t the only one, as the Maroons repeated as team champions with a meet-best 323.5 points.

East Grand Rapids finished with 267 points to place runner-up for the fourth straight year, while Marshall was third with 198 points.

“We just had a really good Friday,” Holland Christian head coach Todd Smeenge said. “Prelims on Friday set you up for finals on Saturday. You can’t win a meet on Friday, but you certainly can lose it. I can’t say there was any magic trick, but we had some swims that were surprising even to me. I didn’t think they were going to swim that fast.”

Holland Christian and East Grand Rapids were tied atop the state rankings going into the meet, but the depth for the Maroons turned out to be the difference.

Holland Christian’s team of Colin Kalkman, Brant Assink, VanMeter and Brad Windemuller won the 200 medley relay in a time of 1:35.81, while the Maroons had second-place finishes in the 200 freestyle (Levi VanAst) and 100 freestyle (Jacob Heeres). Diving and the breaststroke were the only events where Holland Christian didn’t have a top-five finisher.

“Last year, we had a team made up of top-end studs … that took a lot of first places,” Smeenge said. “We took several state records. This year, we were more about depth and having the guys in all the places.”

Other individual winners besides Peel and VanMeter were Spring Lake junior Kevin Losee in the 200 freestyle (1:39.76), Trenton sophomore Spencer Boling-Hamer in the 200 individual medley (1:55.73), St. Johns senior Cayden Petrak in the diving event (520.20), Mason sophomore Jonas Cantrell in the 500 freestyle (4:34.45) and Milan freshman Andrew Dobrzanski in the 100 breaststroke (58.53). 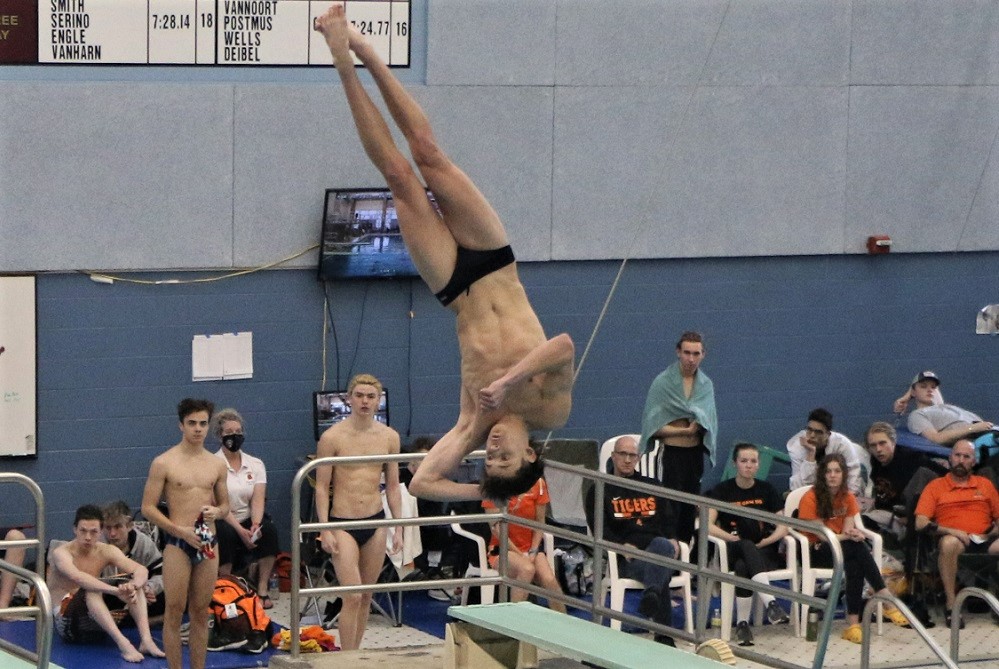 Bayer capped his high school diving career at Saturday’s Lower Peninsula Division 3 Finals with an extraordinary performance that may not be surpassed for some time. Bayer posted a score of 590.85, repeating as LPD3 champion and also breaking the all-Finals record of 584.75 set in 1981 by Ann Arbor Pioneer’s Bruce Kimball, who went on to earn All-America honors at University of Michigan and a silver medal at the 1984 Summer Olympics.

Bayer had scored 490.75 to win the diving competition by just less than 18 points at the 2021 LPD3 Finals, and he had dived a personal-best 555 during the Division 3 Invitational this regular season. He won this past weekend by 134.80 points, as East Grand Rapids also repeated as team champion. Bayer will continue his academic and diving careers at South Carolina, drawn also by his interest in the university’s business school.