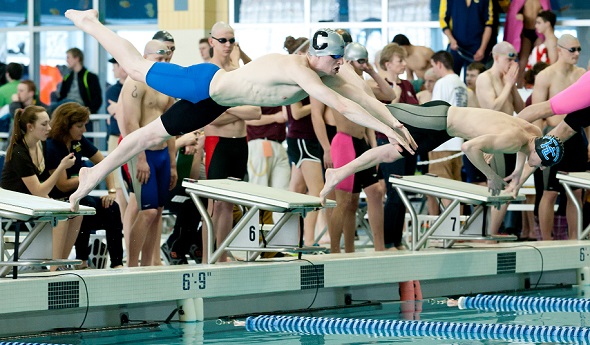 An accomplished group of athletes should bring plenty of flash to this weekend’s MHSAA Lower Peninsula Swimming and Diving Finals.

Nine have their names attached to at least one MHSAA Finals record, while 17 have stood on the top step of the champions podium for winning at least one individual or relay event over the last three seasons.

See below for team favorites and top individuals to watch at all three meets. Preliminaries are Friday, with championship races and diving Saturday. All three Finals also will be streamed live and can be watched with subscription on MHSAA.TV.

Click for lineups and seed times for all three meets.

Team contenders: Reigning champion Birmingham Brother Rice is again the top-ranked team after winning last season’s championship by an incredible 143 points. The Warriors have 16 individuals seeded to score among the top 16 places, plus all three relays including the top-seeded in the 400-yard freestyle. Seniors Gust Kouvaris and Mark Blinstrub have been major contributors most of their high school careers, while sophomore Rudy Aguilar owns a top individual seed and swims relays as well. Holland West Ottawa, last season’s third-place finisher, has 10 individuals seeded to score plus all three relays – and eight of those 13 are seeded first or second in their events, with senior Tabahn Afrik and sophomore Spencer Carl expected to score big points. Ann Arbor Pioneer will try to move up from fourth last season and could make some waves with all three relays seeded fourth or higher.

Tabahn Afrik, Holland West Ottawa senior – Owns the LP Division 1 Final record in the 100 freestyle of 43.9 seconds and has the fastest seed time this winter of 44.15 – and could make a run at the all-Finals record of 43.73 swam by Battle Creek Lakeview’s Clay Youngquist in 2011. Afrik also is the reigning 200 freestyle champion but will instead swim the 50, in which he’s seeded second (20.51) and set the Finals record last season leading off his relay.

Will Brenner, Ann Arbor Huron senior – One of the rare athletes who both swims and dives, he finished sixth in the 50 freestyle and third in diving last season and should contend in both. His 20.37 qualifying time in the 50 is only one tenth of a second off the LP Division 1 record.

Spencer Carl, Holland West Ottawa sophomore – Holds second seeds in both the butterfly (50.49) and 200 freestyle (1:41.31) after finishing 11th in the butterfly last season.

Devon Nowicki, Lake Orion senior – Finished sixth in the 500 freestyle and ninth in the 200 last season, but will swim the butterfly and breaststroke this weekend and has the top seed times in both – 49.93 and 54.31, respectively. His breaststroke time would set an all-Finals record by one second.

Jack Walsh, Detroit Catholic Central senior – Owns the top seeds in both the backstroke (49.52) and 200 individual medley (1:50.02) after winning the backstroke and finishing second in the IM in 2014.

Jack Herremans, Rockford junior – Posted the top Regional score of 537.25 as the reigning Division 1 Finals champion. He scored 458.00 to claim last season’s title and could make a run at the LPD1 meet record of 494.40.

Birmingham Brother Rice 400 freestyle relay – This was one of the few events Saline didn’t win when it dominated the 2013 Final, and the Warriors are going for a third straight victory with both Kouvaris and Blinstrub swimming and second straight with junior Bobby Powrie as a contributor. Aguilar fills the fourth spot.

Team contenders: Like Brother Rice in Division 1, Birmingham Seaholm won last year’s title by a significant margin (154.5 points) and is ranked No. 1 again. All three relays are seeded first, to go with 15 individual cuts seeded to score and the top-scoring diver at Regionals, junior Sebastian Fay. Ann Arbor Skyline is expected to move up from sixth last season on the strength of three relays and 16 individual seeds in scoring position, including two top seeds. Dexter was last season’s runner-up and also has all three relays seeded among the top eight in their races, plus a top-seeded individual.

Nate Kozycki, Grand Rapids Northview senior – Enters with the top seed time in the butterfly (51.34) and 11th-fastest in the backstroke (54.81) after finishing eighth in the individual medley and 10th in the butterfly in 2014.

Jacob Montague, Grosse Pointe South junior – Expected to turn a third in the IM and fifth in the breaststroke at last season’s Finals into championships this weekend. Montague has the fastest seeds in both the IM (1:53.06) and breaststroke (57.41).

Jack Russell, Birmingham Seaholm senior – Won the 200 individual medley last season and finished 10th in the 500 freestyle. He’s seeded sixth in the IM (1:57.61) and fifth in the breaststroke (58.81) and could be part of two more record-setting relays (see below).

John Vann, Battle Creek Lakeview senior – The two-time butterfly champion also took second in the 200 freestyle last season and is seeded second in both races this weekend. He’s just behind Kozycki in the butterfly (51.58) and Vander Meulen in the 200 (1:44.82).

Robbie Zofchak, Dexter junior – Finished second in the backstroke and individual medley last season after swimming the fastest IM preliminary time. He enters Friday seeded first in the backstroke (51.61) and third in the IM (1:54.13) behind Montague and Orringer.

Birmingham Seaholm 200 freestyle relay – Seniors Enrique Hernandez and Russell and juniors Ciemniecki and Liam Little enter with a seed time of 1:25.30 – 64 hundredths of a second off the LPD2 meet record. Hernandez was part of last year’s champion in this race.

Team contenders: Top-ranked Bloomfield Hills Cranbrook Kingswood won its first MHSAA team title last season after finishing runner-up in 2013, and enters with all three relays and 18 individual seeds in scoring position – including three top-seeded swimmers and one top relay. Chelsea, last season’s runner-up by only 26.67 points, has three relays and 15 individuals seeded to score, plus three contenders in diving. Chelsea is seeking its first MHSAA title, while East Grand Rapids has won 25 – most recently in 2013. The Pioneers were third last season, just 41.17 points off the lead, and should again have all three relays in contention, along with 11 individuals seeded to score.

Mitch Buccalo, Cranbrook Kingswood senior – Reigning champion in the individual medley is seeded first in that event (1:55.93). He also finished fifth in the backstroke last year, but instead will swim the butterfly and is seeded fourth (52.30).

Skyler Cook-Weeks, Holland Christian freshman – Reigning 500 champ Parker Cook-Weeks graduated, but little brother Skyler has the top seed in the (4:46.14) and sixth seed in the 200 freestyle (1:47.79).

Brendan Gatward, Detroit Country Day junior – His seeds of seventh in the IM (2:03.67) and sixth in backstroke (54.22) might appear in the middle of a group of contenders. But Gatward is the reigning backstroke champion and took fourth in the IM in 2014.

Alec Nyboer, Hamilton junior – Reigning butterfly champion is seeded first in that race (50.21), but also will try to move up from seventh last year in the backstroke; he’s seeded second (52.28) in that event.