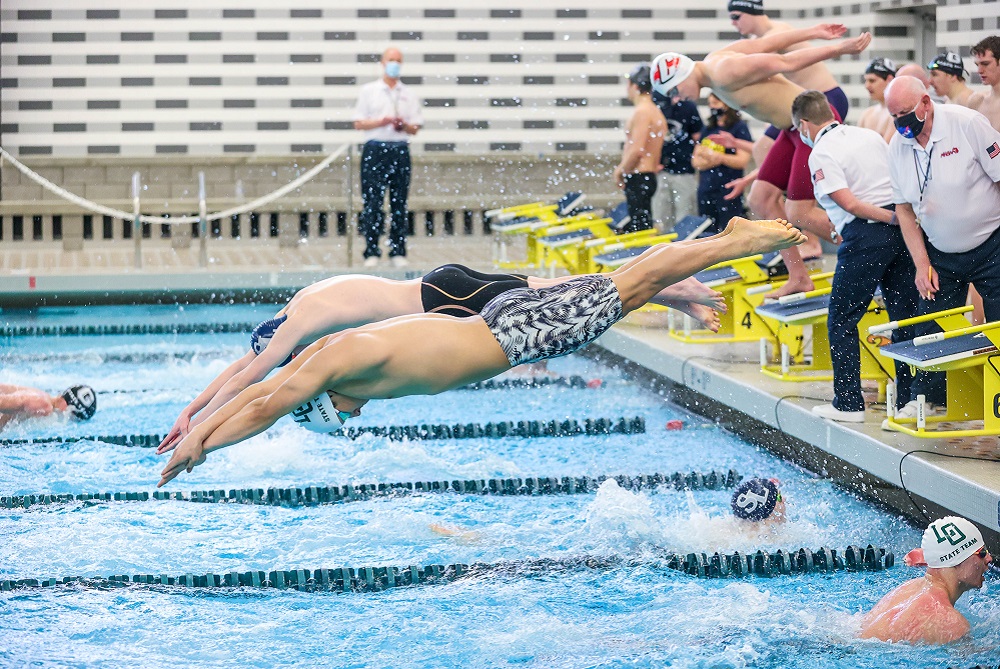 In Division 1, Ann Arbor Pioneer is loaded with high seeds as it attempts to repeat as champion. A closer team race is expected in Division 2, but Ann Arbor Skyline enters with similar high-seed credentials. And East Grand Rapids is the favorite again in Division 3 as its seeks Finals win No. 27. At least three relay records appear in the running to be broken, and we’ll say good-bye to some accomplished individual standouts including a pair of past champions in Division 3.

Preliminaries at all three Finals sites begin at noon Friday, with swimming and then diving, with Saturday championship events starting at noon. Tickets cost $11 each day and may be purchased for Divisions 2 and 3 exclusively at GoFan. (Division 1 tickets were assigned two per participant.) Both days of all three meets will be streamed live and viewable with subscription on MHSAA.tv.

Here’s a glance at team and individual favorites:

Joshua Brunty, Saline senior: The top seed in the 100-yard breaststroke (57.02) also may swim on two top-four seeded relays. He was second in the breaststroke last season and swam on winning and runner-up relays. He also finished 13th in the 50 freestyle and will swim that again this weekend.

Ryan Gurgel, Canton junior: After placing third in the 200 individual medley and ninth in the 100 butterfly in 2021, he enters this weekend the top seed in the 200 freestyle (1:41.96) and seventh in the butterfly.

Kevin Maas, Holland West Ottawa senior: He won the 50, tied for second in the 100 free and swam on the winning 200 freestyle relay as a junior, and returns this weekend as the second seed in the 50 (21.14) and breaststroke (57.79) while likely also swimming on two of three third-seeded relays.

Gabriel Sanchez-Burks, Ann Arbor Pioneer junior: He competed at last season’s Finals in the 50, finishing 19th in qualifying, but he’s moved all the way up to having the top seed in that race this weekend (21.05) and the eighth seed in the 100.

Jack VanHowe, Rochester senior: The reigning champ in the backstroke is seeded first in that race (48.62) and third in the 100 free (46.19) after tying with Maas for second in that race a year ago.

Robert Yang, Ann Arbor Pioneer senior: He’s the top seed in the butterfly (50.08) and 11th in the 50 and likely to swim on two top-seeded relays after finishing eighth in the butterfly and ninth in the 100 free in 2021.

Ann Arbor Pioneer’s 200 free relay: The expected lineup of Sanchez-Burks, seniors Harrison Sanders and Alex Farmer and Hume have a seed time of 1:23.97 that would rank as fifth-fastest in LPD1 Finals history and is just more than a second off the all-Finals record of 1:22.8 swam by Bloomfield Hills Brother Rice in 1996.

Alex Poulin, Waterford United junior: Last season’s third-place diver won his Regional this time by 80.45 points with the highest score, 469.75, at any Division 1 Regional by 23.45.

Michael Grover, Byron Center senior: The reigning breaststroke champion is seeded first (56.08) in that race and eighth in the IM after taking seventh in the latter last season.

Ben Kurniawan, Ann Arbor Skyline senior: He returns after finishing fifth in both the butterfly and IM in 2021. He’s seeded first in the butterfly (49.50) and second in the IM (1:54.42) with a chance at a pair of relay records as well.

Evan McKelvey, Ann Arbor Skyline senior: He finished seventh in the 100 and fifth in the 200 as a junior and returns this weekend as the top seeds in both (49.69 and 1:39.77, respectively) and a possible leg of both record-pursuing relays.

Ann Arbor Skyline’s 200 freestyle relay: The expected lineup of McKelvey, junior Jack Staunton, Kurniawan and Lee enters with a seed time of 1:23.69, which would best the LPD2 record by four tenths of a second.

Ann Arbor Skyline’s 400 freestyle relay: McKelvey, freshman Lucas Caswell, Kurniawan and Lee have a seed time of 3:04.36, which would break the LPD2 record by 37 hundredths of a second.

Logan Hepner, Grosse Pointe South junior: Last season’s diving runner-up won his Regional by nearly 55 points with a score of 548.15, the best at any Division 2 Regional by 49.05 points.

Erik Bolang, Pinckney senior: This will be his second Finals as he swam the IM and 500 as a freshman, and Bolang enters this time as the top seed in the IM (1:54.84) and second seed to teammate Tyler Ray in the butterfly (49.66). He’s also slated to swim on the top-seeded medley relay.

Charles Brown, Spring Lake senior: He’s hoping to take the final step after finishing second in both the 50 and butterfly last season. Brown is seeded first in the 50 (20.54) and third in the butterfly (49.68).

Andrew Dobrzanski, Milan senior: The reigning breaststroke and IM champion also won the former as a sophomore and set the LPD3 Finals record in that race of 54.67 last season. This time he is seeded first in the 200 free (1:41.56) and second in the breaststroke (56.26).

Tyler Ray, Pinckney senior: The reigning butterfly champion could double or triple his individual championship number as the top seed in both that race (48.89) and the backstroke (50.34). He’s also part of that top-seeded medley relay.

Ethan Schwab, Bloomfield Hills Cranbrook Kingswood junior: Last season’s runner-up in the 500 and breaststroke (and a medley relay champion), Schwab is seeded first in both individual races in 4:43.42 and 55.59, respectively.

Charley Bayer, East Grand Rapids senior: The reigning champion diver posted a score of 520.80 to win his Regional by 97.3 points and pace all of Division 3 by 38 points.

PHOTO A pair of swimmers launch side-by-side during a relay at last season's Lower Peninsula Division 1 Finals. (Click for more from HighSchoolSportsScene.com.)