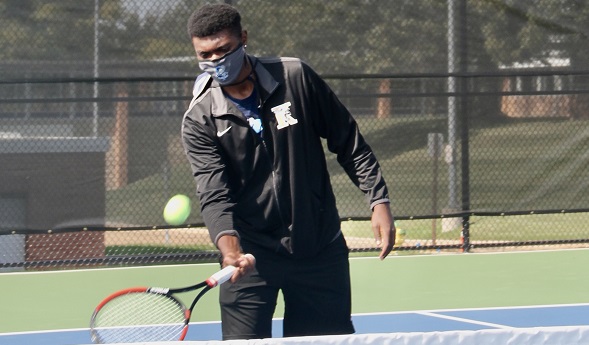 KALAMAZOO — When he was 5 years old, Daniel Henry lost his father to brain cancer.

At age 14, he lost his mother to breast cancer.

Grieving his losses and living with his 23-year-old sister, Henry found solace in friends and high school tennis.

After skipping fourth grade, Henry was a young sophomore at Kalamazoo Central when his mother died.

“It was very difficult,” said Henry, now 21. “She’s the one who structured my day. It was my mom that planned out my activities because on the Northside (area of Kalamazoo), it’s very easy to get very distracted and do the wrong things.

“She definitely made sure that I followed the right type of people, people who were doing the right kinds of things for me. After that, it was, ‘Now what do I do?’”

Tennis indeed played a prominent role, engaging him at Central, pointing him toward the next step after graduation and bringing him back after college to share what he's learned.

Tennis continues to give Henry a connection with his mother, Gina Rickman, who was a tennis pro at the YMCA of Greater Kalamazoo.

Continuing her legacy, he is a first-year coach of Kalamazoo Loy Norrix’s boys tennis team – quite a leap for a guy who played high school tennis at crosstown rival Kalamazoo Central.

“I hope no one from Central sees this,” Henry said, laughing. “I actually really do like it.

“Whatever I thought of Norrix my whole time being at the rival school, it’s kind of nice now that I don’t have to have any ill will toward my rival school. My mom went (to Norrix) as well. It’s just kind of poetic.”

Graduating from Kalamazoo College this year with a degree in computer science, Henry is taking a break from his job as a legal intern at Ven Johnson Law to coach.

Portage Central tennis coach Peter Militzer worked with Rickman and has known Henry most of his life.

“Gina had a heart of gold. She did more for the game of tennis with underprivileged youth than anyone I know,” Militzer said. “She instilled that same sense of giving back to your community in both Daniel and (sister) Brittany.”

Brittany Johnson took charge of Henry when their mother died, since his uncle lived in Chicago and his beloved grandmother, June Cotton, was in a nursing home.

“Looking back, I expected her to take on the role of my mother and was disappointed at times when I feel like she didn’t quite live up to that,” Henry said of his sister.

“But now that I’m nearing 22, I couldn’t imagine having the responsibility of taking care of anyone.”

Without his mother’s guidance, “It was very hard for me to find something to do constructively other than tennis. 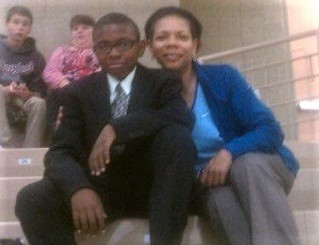 ”I’m just really happy I didn’t fall into some bad habits. It could have made it much harder to get here, if not impossible.”

Henry started playing tennis at age 7, but when a coach tried to change his grip by taping his hand to the racket, he said he gave it up.

“When I got to high school, I was like, ‘OK. I played this before. I’m not really good at it right now, but I can meet some friends and play a sport in high school,’” Henry said, “because I wasn’t sure if I was going to make the basketball team.”

Militzer said that at K-Central, Daniel was almost a coach to his teammates.

“He had few players on his team who could even rally with him, but it never seemed to get him down,” he said.

“In watching his team interact, you could see how important he was to the group.”

The Kalamazoo Promise was instrumental in Henry’s college choice.

The Promise is a fund provided by anonymous donors that will pay tuition to any Michigan college for students who graduate from Kalamazoo Public Schools.

“In kindergarten, they pound (the Promise) into our heads,” Henry said. “I didn’t really know what it meant at the time.”

By his sophomore year at Central, he understood and realized he had to keep his grades up if he wanted to attend college.

“I had a 4.0 before my mom passed away,” he said. “For me to just try to hold on and keep my grades, up I  didn’t really need to study very much. But it started to show my senior year when I took AP classes.

“Part of it was I’m going to college because my grandma said so, and (I need to) keep my grades up so I can go to the best college I can go to.”

“I’d been ignoring (Riley’s) emails because it was a Division III school,” Henry said. “Then  I learned (Hornets tennis) was top 20 in the nation. I didn’t know much about college athletics.”

He chose Kalamazoo College, but said he was feeling burned out on school.

“‘You’re here to get your degree and move on because tennis will only last four years, but the connections you make and things you learn will last the rest of your life.”

Norrix athletic director Andrew Laboe noted how the tennis team got a boost after football was postponed due to COVID-19 precautions earlier this year. At many schools, football players picked up other fall sports including tennis. “The telling part of that is three out of the four football players have stayed for the remainder of the season,” he said.

“Daniel is a big reason why they stayed. He has made tennis a fun experience for everyone.”

Laboe said Henry’s youth is a plus.

“He relates to the athletes well as he understands them at their level as he is young himself,” Laboe said. “They respect that he has played well at Kalamazoo College and that he is a product of Kalamazoo Public Schools and has been in our community his entire life.”

Riley said Henry is a “good listener, empathetic, caring, respectful and wants his (players) to love the sport like he does.

“He’s a proactive leader and has the ability to lead by example on the court. Daniel will thrive in life and any endeavor that he chooses.”

While Henry has his eye on attending law school in the near future, he is committed to teaching his Norrix players those same values.

“This is so fun, especially being in a team environment,” he said. “Looking at the relationship that I have with Coach Riley, he’s just hilarious and knows exactly what he’s talking about.

“If the player listens, he’s going to start winning. That’s just how it works. That’s how it worked throughout my career. The times I lost was because I wasn’t listening.”