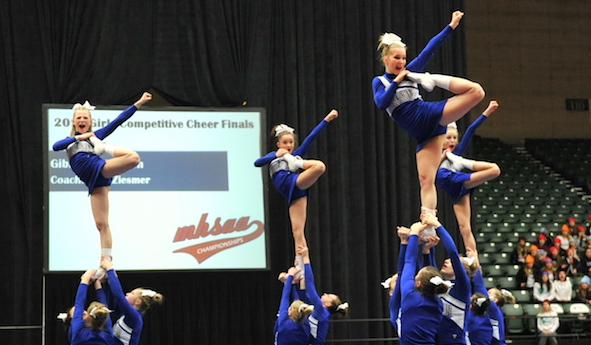 The pressures involved with the astounding feat didn’t faze the Marauders at all.

Gibraltar Carlson led from start to finish during the Division 2 Final at the DeltaPlex and became the first cheer team to win six consecutive MHSAA championships, regardless of class or division.

The Marauders previously were tied with Rochester (1999-2003) for the longest streak. They snapped the deadlock with a convincing win ahead of runner-up and Downriver League rival Allen Park.

“Going for six in a row, which had never been done in cheerleading, was a lot of pressure,” second-year Gibraltar Carlson coach Ayrn Ziesmer said. “I’ve done a lot of things in my life that I’m proud of, but I will never be a living legend, and that’s what they are today. They will go down in history as the first team in cheerleading to win six in a row, and that is something that can never be taken from them.”

Gibraltar Carlson’s historic effort was accomplished with a youthful group. One senior and one junior combined with 11 sophomores and seven freshmen to spark the top-ranked squad.

The lone senior, Mary Miller, became the only girl to be a part of the team’s last four MHSAA championships.

“It’s so relieving to go out on top, and this is unreal,” Miller said. “When I was a freshman and we three-peated, I never thought it would be my senior year and the only one doing it for six and making history. I’m very proud of my team right now and the coaching staff.”

Miller said the pressure to carry on the tradition was intense.

“There’s a lot of pressure walking in here and knowing that everyone wants to see you fall because they want a new champion,” she said. “But for me, that fueled my fire and made me want to prove everybody wrong.”

The string of titles for Gibraltar Carlson began in 2011 under coach Christina Wilson and then transitioned to Danielle Jokela in 2013. She passed the reins to Ziesmer last season, and the success never wavered.

“There are a lot of expectations for this program, and they are expected to be better than everybody else every day,” Ziesmer said. “They are held to a higher standard, so I’m extremely proud that they were able to live up to it and win by the margin that they did today.”

The Marauders held a six-point advantage heading into Round 3. They cemented their place in history by posting a 319.40.

“It’s our money round,” junior Jordyn Hodge said. “It’s my favorite round to compete in, personally, and we just have fun. Hitting it just makes everyone want to do it over and over again.

“This season has been amazing, and it means a lot for all of our hard work to pay off. Working hard for nine months, getting here and then doing it.”

The Marauders posted high scores in each round, something they didn’t produce a year ago.

“We lost Round 2, so when we left last year it was a kind of a we-wanted-more feeling,” Ziesmer said. “But this year they won all three rounds by a pretty big margin, and that is such a satisfying feeling. To know that I, or the team, couldn’t have done anything better. They have no regrets.”

Allen Park placed in the top-two for the first time since winning a Division 2 title in 2010. The Jaguars also were young, boasting a bevy of underclassmen.

“I have a very young team, and they were hungry,” Allen Park coach Julie Goodwin said. “They’ve been working hard, and they did an outstanding job today. Our goals today were to just put out our best rounds, have fun and make memories. We knew it was going to be a battle today, and our Round 3 was awesome.”