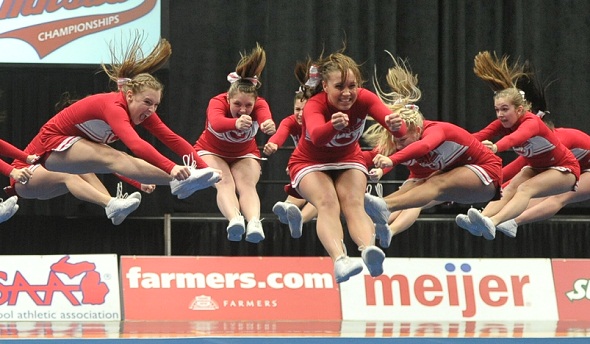 GRAND RAPIDS – The Michigan Center competitive cheer team didn’t perform to its full potential in Round 3 of the MHSAA Division 4 Final.

A strong Round 2 performance prior to that more than made up for it.

The Cardinals sputtered in their final round Saturday afternoon at the DeltaPlex, but it didn’t prevent them from pulling off the three-peat.

The Cardinals tallied a three-round score of 731.26, while the Pirates made a late charge and finished with a 727.52.

“If it wasn’t for having such a strong Round 1 and Round 2 score, we wouldn’t have won this competition,” Michigan Center coach Jessica Trefry said. “We struggled a little bit in Round 3, and unfortunately it wasn’t as high as we hoped to be. But as a whole, we did enough to get it done.”

Michigan Center, which also won the title in 2009 before its current run, took a commanding 11-point lead following a dominating Round 2 that has been its trademark.

The Cardinals, who didn’t get outscored in Round 2 all season, registered a score of 219.96 to provide a much-needed cushion entering the final round.

“Round 2 has been a strength of ours all year, and my girls are incredible athletes and are strong with their skills in that round,” Trefry said. “I tell them that no one can out-do them in that round, and it’s true. It is an amazing group that is so in sync and powerful.”

Michigan Center had an early fall in Round 3, and its score (288.1) was the second lowest of the eight teams.

The team, however, recovered from the early miscue.

“I did take a fall, but it didn’t matter because I knew the rest of the round I had to stick everything perfectly,” said Michigan Center’s Megan Shown, the team’s lone senior. “In every round I knew we could dominate in, and obviously we did. This is amazing, three of them in a row back-to-back-to-back. I can’t believe it. I’m a senior, so it’s the best way to go out.”

Pewamo-Westphalia was seeking its ninth MHSAA title, and first since 2010, but wound up with a runner-up finish for the third straight year.

“It was hard to come back from that difference in Round 2, but they did amazing,” Pirates coach Staci Myers said. “It is the best they’ve ever done in all three rounds, and I couldn’t be prouder. We were excited to be here, and to come out with a medal and second place.”

Pewamo Westphalia narrowed the gap on Michigan Center by delivering the second-highest Round 3 score.

“They came out and hit Round 3, and I couldn’t ask them to do anymore,” Myers said. “It was the best they have performed it this year, and we were able to stay in second.”

Michigan Center defended despite graduating nine seniors from last year’s squad, and with the return of all but one for next season, the future remains bright.

“We returned some strong athletes, and they had this in their mind from the very beginning,” Trefry said.

“This was their goal, to be here and win it again. I have a big group of juniors, and now they want to get it done again next year. It gets harder and harder every year, but I’m proud of this group and the effort they’ve put in this year. I’ve enjoyed this year.” 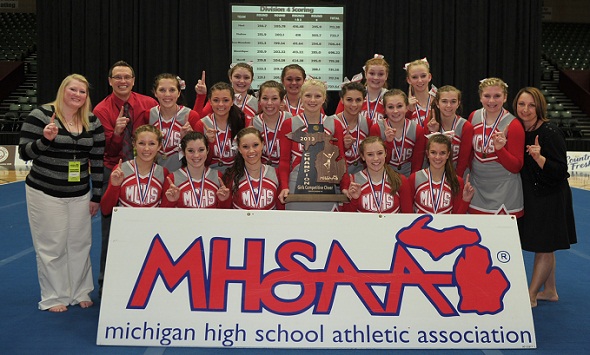