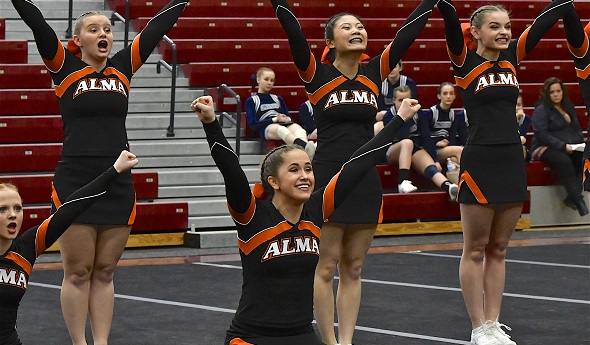 Over the past two weekends, they’ve faced off twice again – the Fighting Irish winning the District by eight hundredths of a point, before Richmond won their Regional matchup a week later by just more than four points.

But there are others who would love to break up that dominance at the top. Below are glances at all eight teams competing Saturday. Division 3 begins at 6 p.m. and will be broadcast live on MHSAA.tv and viewable on a subscription basis. Click here for the Finals draws and other important information.

RICHMOND
League finish: First in Blue Water Area Conference
Coach: Kelli Matthes, 11th season
Championship history: Division 3 champion 2013 and 2012, runner-up five times.
Top score: 789.08 at the Regional.
Team composition: 29 total (seven seniors, 11 juniors, three sophomores, eight freshmen)
Outlook: As noted, Richmond bounced back from the close District runner-up finish to win the Regional by four points, and the Blue Devils have gone over 783 seven times including in their last four events. They own the top Round 2 (232.6), Round 3 (320.5), total and average total (779.8) scores in the division. Nearly all of the team’s best from 2018 are back for another run – seniors Kendal Valentine and Hannah Lopiccolo and junior Nicole Logghe made the all-state first team last season, while seniors Jordan Anthony and Megan McCallister and junior Madison Danielle made the second and junior Jordan Valentine earned honorable mention.

PHOTO: Alma will be making its first MHSAA Finals appearance; here, the Panthers compete at the Alma College Cheer Fest. (Click for more from HighSchoolSportsScene.com.)