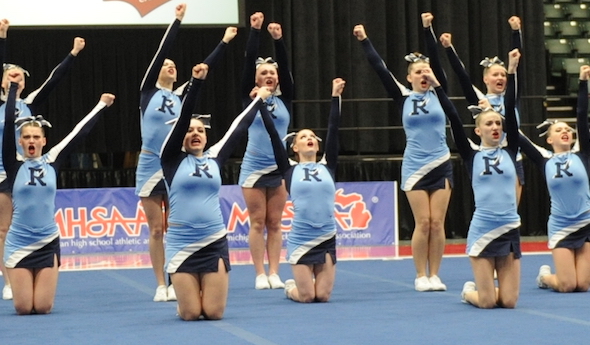 With average overall scores this winter that best the rest of Saturday’s field by 25 points, it’s expected that trend will continue in this season’s final competition – but of course, six more contenders will have something to yell about that starting when Round 1 begins at 6 p.m. at Grand Rapids’ DeltaPlex.

Following are glances at all eight Division 3 teams competing. All four Finals will be broadcast live on MHSAA.tv and viewable on a subscription basis.

RICHMOND
Rank: No. 1.
League finish: First in Blue Water Area Conference.
Coach: Kelli Matthes, ninth season.
Championship history: Division 3 champion 2013 and 2012, runner-up three times.
Top score: 784.56.
Team composition: 36 total (11 seniors, five juniors, nine sophomores, 11 freshmen).
Outlook: A large group of juniors that led the team to a runner-up finish last season are now seniors, and they have Richmond the clear favorite with its District and Regional wins just ahead of Notre Dame Prep. Richmond’s average score of 775.3 is more than 12 points higher than Notre Dame’s and nearly 39 higher than the rest of Division 3 – plus it owns the high scores in the division in all three rounds. Seniors Kari Olsen and Kaleigh Taylor made the all-state first team in 2016, and senior Lauren Duche made the second.

PHOTO: Richmond competes during Round 1 at the 2016 Final.