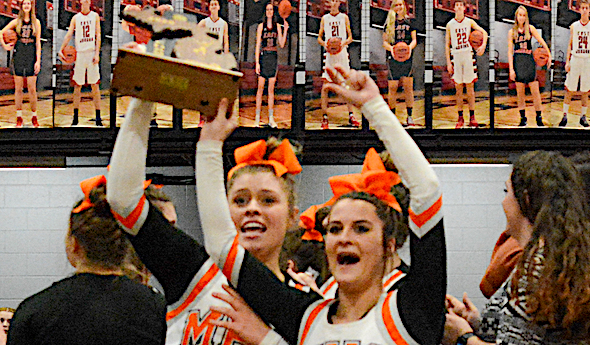 Six of eight competitive cheer teams taking the mat in Division 4 on Saturday at Grand Rapids’ Delta Plex will be competing this weekend for their first MHSAA Finals championship in the sport.

In fact, two will be appearing at the Finals for the first time, and two more have only debuted over the last three seasons.

That could make for some interesting possibilities, as reigning champion Pewamo-Westphalia and last year’s runner-up Hudson again lead the chase – but with a number of contenders gaining on historic opportunities.

Below are glances at all eight teams competing for this year’s title. Round 1 begins at 2 p.m. Saturday, and the event in its entirety will be broadcast live on MHSAA.tv and viewable on a subscription basis. Click here for the Finals rotation schedule and other important information.

ADRIAN MADISON
League finish: Does not compete in a league.
Coach: Sarah Kope, first season
Championship history: Seeking first MHSAA Finals top-two finish.
Top score: 732.74 at the Regional.
Team composition: 9 total (two seniors, one junior, four sophomores, two freshmen)
Outlook: Madison ran its streak of third-place Finals finishes to three straight last season. Kope served as an assistant for all three of those teams before taking over her alma mater this winter. The Trojans steadily have built to this stage this winter, with their top three total scores coming in their three most recent meets. Seniors Abbey Dusseau-Garno and Hannah Lobkovich both made the all-state first team last season for the second time.

HUDSON
League finish: First in Lenawee County Athletic Association
Coach: Kelly Bailey, 23rd season
Championship history: Division 4 champion 2018, six runner-up finishes.
Top score: 777.38.
Team composition: 22 total (five seniors, eight juniors, five sophomores, four freshmen)
Outlook: Last season’s runner-up finish was Hudson’s third-straight placing in the top two, and the Tigers look strong to make another run at the title. All of their total scores this season are above 700, and their best total score is 10 points higher than last year’s heading into the Finals. They’ve won every competition but one, and all of their high round scores rank fourth or higher in Division 4, with their best Round 2 (227.6) second on that list. Although Hudson’s all-staters from last season are not posted, seniors Summer Walker, Anna Valdez, Lyndsey Tanner, Savanna Proudfoot and Anna Loar; juniors Kaley Bloomer, Ahna Marry, Kallahan Marry and Emma Shirey; and sophomore Maize Sholl all earned all-Regional recognition in 2019.

MUNISING
League finish: Does not compete in a league.
Coach: Nicole Lasak, seventh season
Championship history: Seeking first MHSAA Finals top-two finish.
Top score: 764.64 at the District.
Team composition: 7 total (three seniors, two juniors, two sophomores)
Outlook: Munising has a great opportunity to improve on last season’s eighth-place finish. The Mustangs won eight of their first nine competitions this winter with a second in the ninth before finishing third at their Regional. All but their first total score of this season has been 714 or higher. All of their best round scores rank fourth or higher in Division 4 – the 229.8 Round 2 is tops on that list – and their average total score of 742.5 ranks second and is 42.5 points higher than a year ago. Senior Kali Donnelly made the all-state first team last season, and junior Marae Ake made the second.

PEWAMO-WESTPHALIA
League finish: Does not compete in a league.
Coach: Staci Myers, 13th season
Championship history: Nine MHSAA titles (most recent 2019), 10 runner-up finishes.
Top score: 779.24.
Team composition: 15 total (four seniors, four juniors, four sophomores, three freshmen)
Outlook: The Pirates went from eighth in 2018 to champion a year ago, and they haven’t slowed down with first or second places at every competition and wins at their District and Regional. Their 745.4 average total score in tops in Division 4 and would rank sixth in Division 3 and 10th in Division 2. All three round high scores are among the top three in Division 4, with the best Round 3 (316.7) ranking first. Senior Isabelle Droste and sophomore Lindsey Pohl made the all-state first team last season, while junior Ellie Pohl made the second team and senior Olivia Richards, junior Ella Smith and sophomore Halie Myers earned honorable mentions.