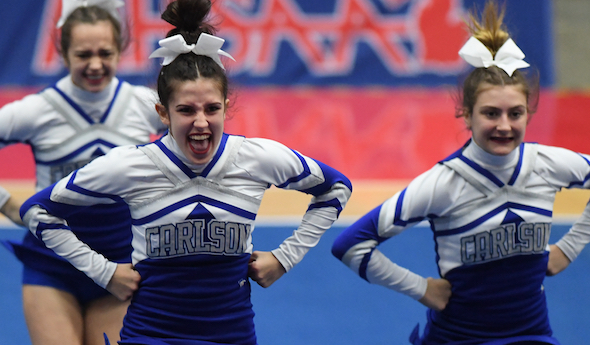 GRAND RAPIDS – Nothing can slow down the Gibraltar Carlson competitive cheer dynasty.

The Marauders – who had won 10 MHSAA titles, including seven of the past eight in Division 2 – came into this season with a first-year coach and just three seniors.

No worries, as the young Carlson team notched title No. 11 with a powerhouse performance Saturday morning in the Division 2 Finals at the Delta Plex.

“We are motivated to keep the dynasty alive, for all the girls that came before and those that are to come,” said first-year coach Ann Hajec, who was a first-team all-stater on Carlson’s 2013 championship team. “We knew it would be close again with Allen Park, it has been all year, but we had enough in Round 3 to pull it out.”

Hajec said the emotions of the Finals are similar as a coach to those she felt as a competitor.

“The heart and fire I feel are the same, but I just have to put it into the girls,” said Hajec, who is assisted by Jordyn Hodge, Tam Christiansen, Emily Howard and Kourtney Tyra.

Carlson got off to a great start in Round 1, then clinched the title with a dominating Round 3, where years of tradition and great expectations came together in a powerful finish. The Marauders won with a three-round total of 791.40.

Pushing Carlson to greater heights, as it has all season and, frankly, the past four years, was Downriver League rival Allen Park.

While Friday night’s Division 1 Finals turned into “The Battle of Rochester” (with Stoney Creek prevailing over Adams), Saturday morning quickly became “The Battle of Downriver” between Carlson and Allen Park.

The Jaguars, who bested Carlson at the conference tournament last month, used the meet’s best score in Round 2 to pull within one point heading into Round 3, but were unable to take the next step. 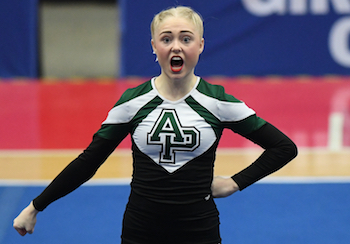 It marked the third time in the past four years that Allen Park finished runner-up to Carlson. Allen Park won the championship in 2017.

“We go neck-and-neck with them all the time, so this was nothing new,” said 14th-year Allen Park coach Julie Goodwin, who said the draw, with her team going first in the crucial third round, may have played a factor in the outcome. “Going into that last round, I told them to go out and have fun and do what they do. I thought we performed very well.”

Hajec became the fifth coach to lead Carlson to a Finals championship.

Carlson’s first title came in Class B back in 1995 under Pat Christiansen. The Marauders then won four titles between 2008 and 2012 under Christina Wilson, two in 2013 and 2014 under Danielle Jokela and then three in the past four years led by Aryn Ziesmer.

Carlson’s 11 Finals championships are second in state history behind Rochester’s 14 titles. Breckenridge is third with 10.

Carlson senior Summer Bojarski, along with McKinley Gessner and Kennedy Turner, are the only seniors on this year’s Carlson team. The future continues to be bright with seven sophomores and seven freshmen on the team.

“I personally have such a satisfied feeling right now because I know I did my job and kept the dynasty going for another year,” said Bojarski. “I wanted to show the younger girls that in order to win, you have to want it more than anything else. You have to love the sport, because that energy shows when you’re out on the mat.”