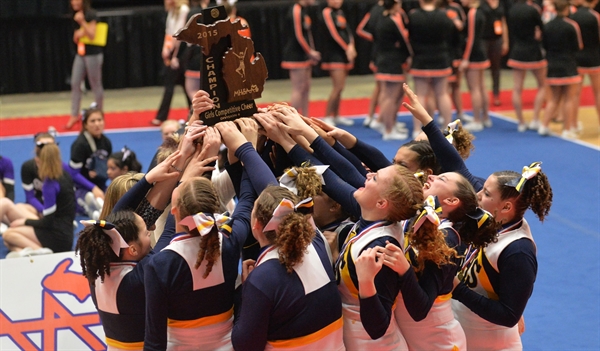 GRAND RAPIDS – The rebuilding process has been completed for the Breckenridge competitive cheer team.

After six years without a program due to low numbers, the Huskies returned to the top after dominating Saturday’s Division 4 Competitive Cheer Final at The DeltaPlex.

The Huskies finished with a three-round score of 754.1 and collected their eighth MHSAA title in school history.

Pewamo-Westphalia placed runner-up at 730.40, while Michigan Center’s streak of four Finals titles in a row ended with its third-place finish (726.02).

“We all knew that our goal was to win another state championship and we completely exceeded our expectations of this year,” all-state sophomore Alexandria Gillis said. “And we’re all really proud of each other.”

Breckenridge was able to compete with a full varsity squad last season for the first time in seven years and advanced to the Finals, where they placed fifth.

Deb Gaines, who co-coached with Jenna Graham, guided the team to its last Finals title in 2007 before the hiatus.

“I retired and went back to recruiting at the lower levels to start it back up,” Gaines said. “We kind of ran out of girls, the middle school program kind of fizzled and we just didn’t have enough high school kids at that point.

“We started rebuilding all those years ago, and now they’ve grown up and here we are. It’s a great feeling, and they did great. We still have a pretty young team.”

Breckenridge set the tone early and posted the Final’s high scores in every round en route to a comfortable advantage.

“We knew it was going to be our last performance, so we wanted to go out there and give it our all and leave it all on the mat,” Gillis said. “Leave no doubts that we didn’t do everything we could do. We went out there and fought for it.”

The Huskies led P-W by almost 15 points entering the final round, a sizable margin built by a pair of nearly flawless routines.

“When we make up our cheers, it’s all about the meaning of the cheer and what they’re saying,” Gaines said. “You mean what you say and say what you mean, and vocally they really pushed that out and everything else followed. They gained a lot of confidence the last three weeks starting at Districts and into Regionals. We saw it coming and coming.”

Graham said the final round proved to be the icing on the cake.

“We’ve had a strong Round 3 all season so they knew when the time came, if we hit it, we were going to get there,” Graham said. “They did awesome.”

It was the 10th Finals runner-up finish in school history for P-W, but it was a satisfying accomplishment after narrowly missing the Finals last season by one spot at Regionals.

“They were super excited, determined and worked very hard all year to get here again,” P-W coach Staci Myers said. “It was a goal just to make it and let the chips fall where they may. They just wanted to come today and perform to the best of their ability, and they were going to let where we fell where we fell.”

“We did the best we could in every round (today) and they’ve improved every week,” she said. “This is the best they’ve done all year long, and they definitely peaked at the right time. We’re really proud of them for working so hard these last two weeks and just to get here has been amazing.”

Breckenridge will have the luxury of returning everyone next season in its bid to repeat. There were no seniors on this year’s team.

“It’s an amazing feeling to know that everybody’s going to be back because we can get stronger with the same people we’ve had,” Gillis said.