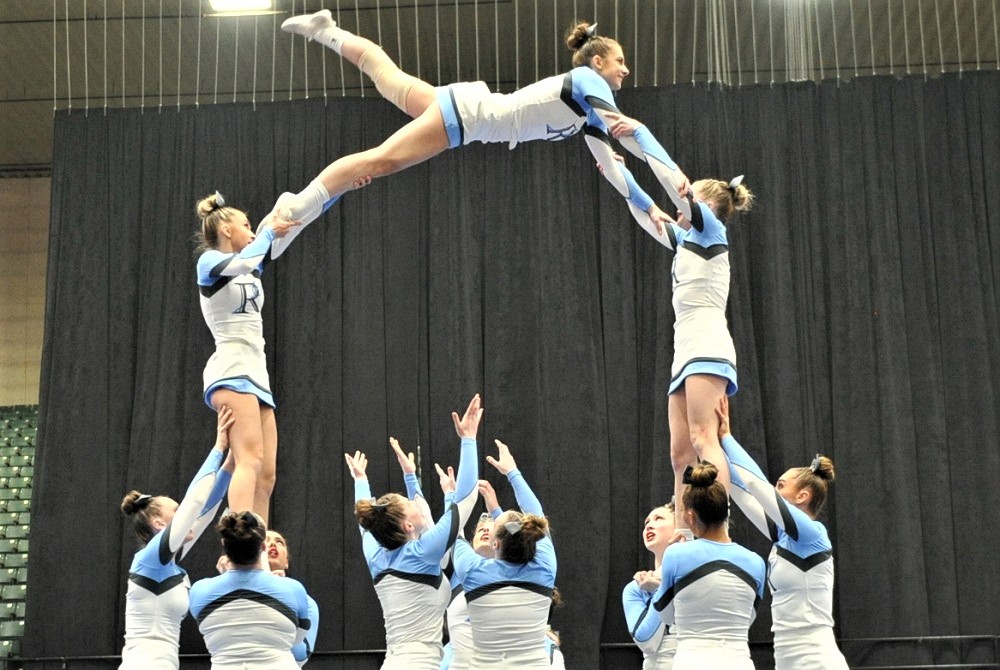 GRAND RAPIDS – Richmond was backed into a corner Saturday afternoon – but like a true champion, dug deep and fought its way out to continue its reign.

The Blue Devils needed a near-perfect final round to barely hold off a gutsy and impressive performance by Paw Paw at the Division 3 Final at the Delta Plex.

“We left our hearts out there on the mat in that final round,” said Richmond senior Sarah Mikolasik. “It’s bittersweet because it’s over, but it’s unreal what we did.”

Unreal is the perfect term to describe the high school cheer career for Mikolasik and the other seven seniors, who were a perfect 4-for-4 with Division 3 championships all four years.

Paw Paw was first to go out of the eight-school field in the final round, and to say the Red Wolves delivered would be the understatement of the day.

The Red Wolves, led by the senior duo of Paige Miller and Lexi Sunlin, absolutely nailed their final routine – much to the delight of the spectators who made the trip up from Southwest Michigan – putting them in position to win their first-ever cheer Finals title and bringing tears to the eyes of their veteran coach.

“I have never cried when one of my teams came off the mat – until today,” said 13th-year Paw Paw coach Stefanie Miller, who is also Paige’s mother. “Throughout that Round 3, the tears just welled up in my eyes. They went for it. I knew they won it.”

But Richmond had its chance.

At that point, all of the pressure in the world was on the three-time reigning champion to perform a very difficult routine, all while knowing that the slightest bobble or lean on a stunt would likely mean the end of that streak. 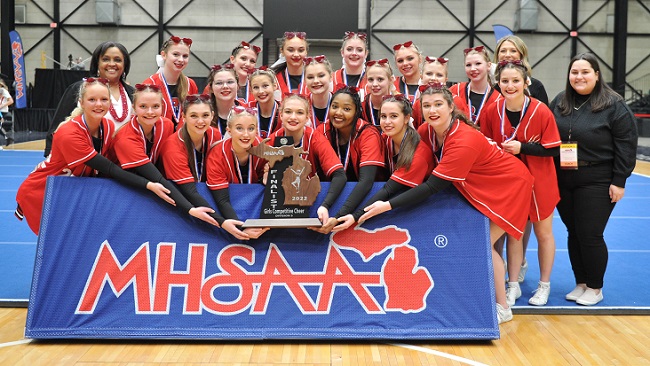 It was against that backdrop that Richmond, representing a small town just north of Detroit, showed why it has emerged as one of the best competitive cheer programs in the state.

Even though they weren’t on the mat at the same time, the Blue Devils matched every skill and stunt of the Red Wolves, finishing with a third-round score of 317.40, slightly better than Paw Paw’s final round of 317.20.

Richmond ended up winning with a total of 781, while Paw Paw was second at 780 – nearly the same margin of victory as one year ago.

“I was speechless when they came off that mat for the last time, because I knew they had done everything that they possibly could,” said Richmond coach Kelli Matthes, who has won six titles to go with five runner-up finishes during her 14 years as the team’s coach.

“They are not supposed to be perfect; they are human. But they fight tooth-and-nail every day to get there.”

The title for Richmond means that all four team champions from 2021 repeated this year – Rochester Adams in D1, Allen Park in D2, Richmond in D3 and Hudson in D4.

Gracie Ellis, one of five returning senior all-staters for Richmond, said the abilities to be coachable and always striving to get better is the reason her school has won four championships in a row.

“Never when we correct people does anybody complain,” said Ellis, who was joined as a senior returning first-team all-stater by Makenna Parker, Hannah Jeroue, Savanna Krywy and Ava Moskwa. “They take it, and they work harder. That’s how you keep getting better.”

Other seniors for Richmond were Eryn Hart, Jenna Alexander and Mikolasik.