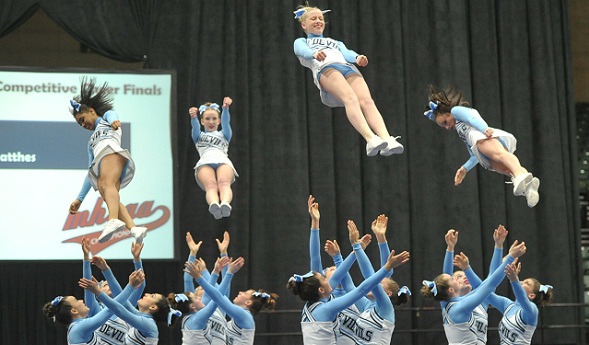 GRAND RAPIDS – Every time the Richmond competitive cheer team exited the mat after each round of the MHSAA Division 3 Final, its faithful supporters in the stands at the DeltaPlex showered down a rousing chant: “Back-to-Back”

The Blue Devils were more than willing to fulfill their fans' desire.

Richmond became the first Division 3 team to repeat after edging Pontiac Notre Dame Prep on Saturday for the title.

The Blue Devils, who won the program's first Division 3 crown last season following a runner-up finish in 2011, posted a three-round score of 768.64, while the Fighting Irish finished fewer than three points back at 765.84.

“Last year was special because it was the first one. But to do it back-to-back is really hard, and it has never been done in our division,” Richmond coach Kelli Matthes said. “And that's been our goal all year, and their theme has been to do what has never been done before. They came in today, and they just owned it from beginning to end.

“Sure we had some bumps and bruises along the way, and things weren't completely perfect today. But they did what they needed to do and they came out on top.” 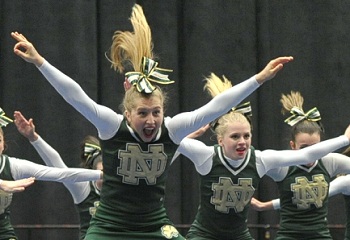 Richmond's Joanna Fenwick, one of seven seniors on the team, said the Blue Devils had doubts after placing runners-up in Districts.

“It was a really rough year because we were District runner-up, and we lost faith, and then we went to Regionals and nailed it,” she said. “I love my team so much, and I couldn't ask for a better coach. This is the best feeling in the world, especially as a senior.”

The Blue Devils, who won the Blue Water Area Conference, set the tone early with a strong Round 1 and scored a 232.2 to grab the lead.

They extended their advantage to seven points after an impressive Round 2.

“I thought the first round was absolutely amazing and breathtaking, and the second round was really strong for us,” Matthes said. “Our signature move, the heel stretch, was a little shaky, but they bounced back from that and nailed their back tuck.

Notre Dame Prep made a late charge with a phenomenal Round 3 performance that resulted in a Finals-high score of 316.1.

The Fighting Irish's creative and energetic round helped them leapfrog Grosse Ile and secure their first MHSAA runner-up finish.

“Our third round cheer is the one we are most proud of,” Notre Dame Prep co-coach Beth Campbell said. “The team loves to perform it, and it is a crowd pleaser. Every time we do that cheer, the girls light up, and the best thing we have going for us is that round. It's a wonderful feeling.”

Notre Dame Prep entered the Finals as the top-ranked team in Division 3, while Richmond was No. 2.

“We beat them a couple times this year, and it was a neck-and-neck battle all season long,” Campbell said. “Tonight, it was their day, but we're going to come back fighting just as hard next year.”

“I couldn't be prouder of her being one of my old kids, and it is really neat for the two of us to be standing here with trophies in our hands,” Matthes said. “It's cool to see what she is doing right now.” 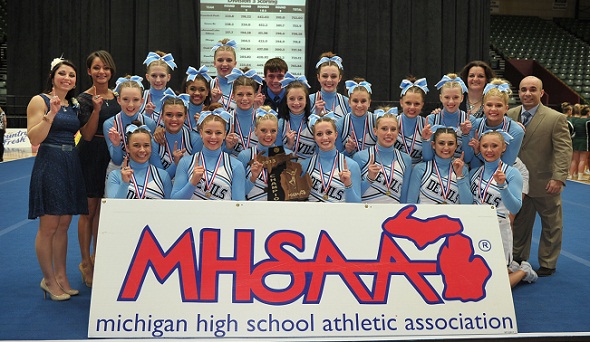