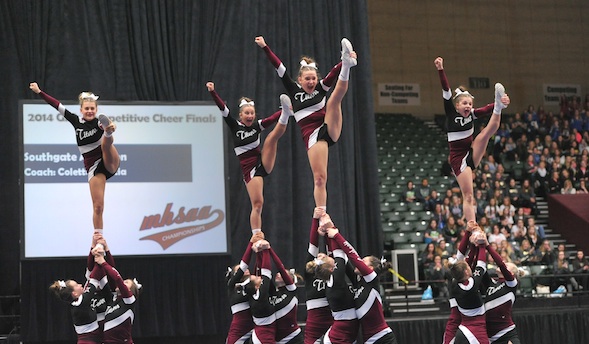 And because those sophomores already acted like seniors even then, coach Colette Norscia felt pretty confident that title was only a start.

Her hunch was correct. That group of seven athletes, now seniors, led Anderson to its third straight MHSAA title Friday at the DeltaPlex,

The Titans scored 785.96 points, 2.42 more than runner-up Grandville after both trailed Rochester Hills Stoney Creek by three tenths of a point after Round 1.

“We’ve been cheering together since we were really little, and we stuck with it all through these years,” Anderson senior Holly Zmijewski said. “We just want to prove who we are, and that we don’t go backward. We just keep going forward.”

But it took a little kick to get the Titans rolling again.

Anderson competes in the Downriver League, which also includes reigning Division 2 champion Gibraltar Carlson and Finals qualifiers Allen Park and Trenton. The Titans finished second at their league competition, four points back of Carlson, which is nothing to scoff but disappointed those seniors nonetheless.

But it also brought perspective to underclassmen who weren’t yet part of the program prior to this championship run.

Norscia knew walking into the DeltaPlex on Friday that her team was prepared every possible way.

“It’s hard to get it, but it’s harder to keep it every year,” Norscia said. “The kids, once they have it, not all of them are so gung-ho about keeping it, working to that level, and I think we got scrutinized a little bit more as well.

“Those sophomores on the team that first year we won, they were strong and carried us through,” she added. “They learned a lot from that senior group, and they’ve been teaching each group that comes in. Our next two classes are just as strong, and actually our eighth grade group is incredible.”

Stoney Creek set the pace with a 235.20 to lead Round 1. But Anderson posted the highest Round 2 score in Division 2 this season and put up a 231.46 on Friday, two points better than both Stoney Creek and Grandville.

Grandville responded with a strong 319.20 in Round 3. But that was bested by only Anderson, by four tenths of a point. 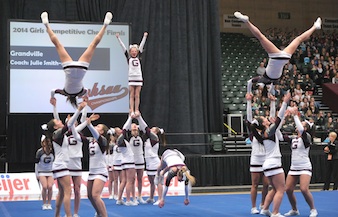 “It’s hard to have to go out there three times, and have to peak three times, and we did,” Grandville coach Julie Smith-Boyd said. “We weren’t playing defense. … We were going for it. We wanted to win.

“But when you’re a senior, or even for any of these girls, we want them to go out just feeling great about it. They gave their all, did their best, and it was that way every single round. We’re just really proud of them.”

The Bulldogs improved from eighth at the 2012 Final to fourth last season to second and have only six seniors – including only two in Round 2, and with a couple freshmen who contributed in Round 3.

A pair of sad circumstances – two athletes’ mothers died during the fall after fights with breasts cancer – bonded the team as it took another giant step.

“These girls just really bonded together really tight, pulled together and supported each other through the whole thing. And I really felt that made them stronger at the end,” Smith-Boyd said. “Because we said, what we’ve been through was far worse than we have to go out there and do. We made it through that; we can do this.

“We did it the best we could do it. Southgate obviously did too.”

Macomb Dakota ascended from seventh after Round 1 to finished third in the final standings. Lake Orion, eighth after Round 1, came in fourth in its return to the Finals after missing last season.

PHOTOS: (Top) Southgate Anderson performs its Round 3 routine Friday at the DeltaPlex. (Middle) Grandville, this season’s runner-up, improved from fourth place in 2013. (Click for action and team photos from Hockey Weekly Action Photos.)