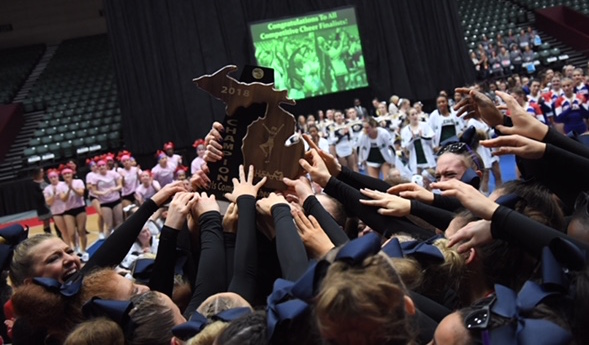 GRAND RAPIDS -- Sterling Heights Stevenson competitive cheer coach Brianna Verdoodt clutched the hardware in her hands as tightly as she could.

“I’m sleeping with this tonight,” Verdoodt declared after her team made school history Friday at the MHSAA Division 1 Final at the DeltaPlex.

Stevenson tallied a three-round total of 793.22 and outlasted runner-up Rochester Adams, which finished at 790.82.

“I could not have written a better story of how this season has gone for us,” Verdoodt said. “We lost only one senior last year, so it was first time we had literally every single girl coming back. So the year started out totally different.

“We could be tough, but still love on them, and we kept pushing just as hard because we knew that we wanted this.”

The Titans placed second to Rochester a year ago and third in 2016. Last season’s was their first runner-up finish at the Finals since 2011.

“We knew we wanted a little bit more this year,” Verdoodt said. “Last year was unexpected with nine freshmen, and making it to the state finals was huge – and runner-up was just like icing on the cake.”

Stevenson capped off an incredible season that included a Macomb Area Conference Red championship and winning all but one competition.

“This is probably the best feeling of my life,” Stevenson senior Anna Long said. “I’ve been working four years to win a state championship, and this is just the best day of my life. We were all confident that we had a shot because this is the best this team has ever been, so we knew it could be done.”

The Titans drew motivation from last year’s finish, and that experience paid off for the veteran group.

“We were so close with a young team and now we’re here, state champs,” Titans senior Carolina Poliss said. “It’s crazy to be the first because we’ve been striving for years for this, and we’re doing something Stevenson has never done before.”

Stevenson trailed Adams by two tenths of a point after Round 1, but jumped into the lead with a solid Round 2 that delivered a high score of 232.72.

All that was left was Round 3, and the Titans punctuated the win with a stirring effort that combined flexibility, strength and agility.

“I was a flyer in high school and I’m crazy about flexibility and things that set us apart from other people,” Verdoodt said. “We have a couple different things in our Round 3 that look odd to a normal cheer person. 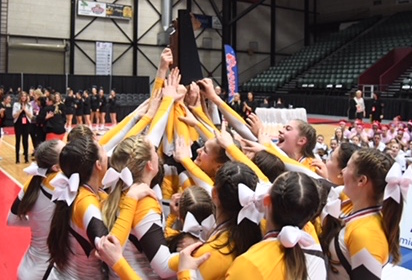 “Round 3 is just a fun one, and we hold them to really high standards for all positions so they can go out and do a performance like that under pressure.”

Long said there was a sense of calm that overtook the team before its final round.

“We’re usually nervous, but we were all really confident this time and it was a different confidence than normal,” she said. “We were all really focused, and I feel like we all knew that all we had to do was hit Round 3 and show we wanted it with heart. Then we knew we could win, because our other rounds were so strong.”

Adams’ runner-up finish was its first in more than two decades. The Highlanders placed second to Rochester in Class A in 1996.

“It feels like first; it really does,” Adams coach Brooke Miller said. “They’ve worked so hard for this, and they’ve definitely fought for everything they’ve done today.”

The Highlanders, who finished fifth last season in their first trip to the Finals in 20 years, had 10 seniors leading the way.

“They really wanted it, and they did everything they could possibly do to get it,” Miller said. “We had nothing to lose tonight, and we wanted to go out there and have fun and let these 10 seniors have the best day yet.”