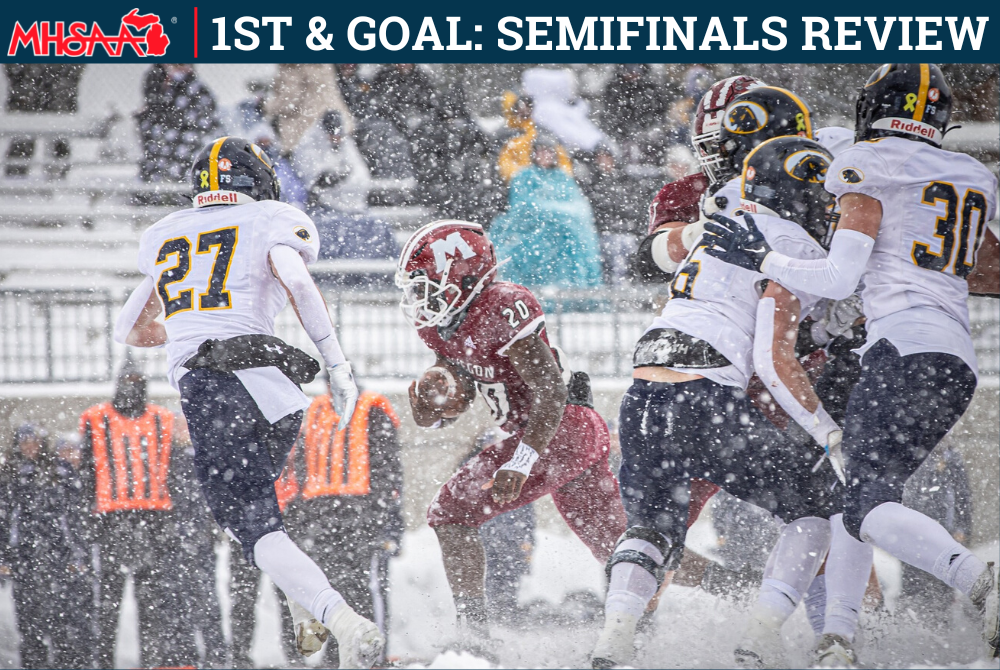 This season's 11-Player Football Finals field is set. And it's fair to expect phenomenal after how this weekend's Semifinals played out.

Both Division 1 games went to overtime. The Division 5 and Division 8 Semifinals produced Ford Field matchups of undefeated contenders. Three reigning champions advanced, as did two teams that won Semifinals for the first time and two more that won their first during the lifetimes of the players on their rosters this fall.

And that's just a sample of what's to come, as we'll preview all eight matchups Wednesday. For today, we're taking a glance back at all 16 games from a snowy, stormy and mostly frigid but forever memorable Friday and Saturday.

SEMIFINAL Belleville 29, Detroit Cass Tech 28 (OT) Arguably the game of the weekend was played Friday night as Belleville took an early 14-0 lead, got behind 21-14, scored with 1:04 left in regulation to force overtime, then answered Cass Tech’s overtime touchdown with a score and game-winning 2-point conversion. The reigning Division 1 champion Tigers improved to 13-0, while the Technicians finished 9-4. Click for more from MLive-Detroit.

SEMIFINAL Caledonia 21, Clarkston 0 An anticipated offense back-and-forth turned into one of the most impressive defensive performances in the state this season as Caledonia shut out a Clarkston offense averaging nearly 41 points per game. The Fighting Scots (12-1) will be playing in their first Final since winning the Division 3 title in 2005. Clarkston finished 10-3. Click for more from the Grand Rapids Press.

Caledonia celebrates after beating Clarkston 21-0 in the Division 1 Semifinal. Powered by @USNRecruiter pic.twitter.com/YM6zg2PTl9

SEMIFINAL Grand Rapids Forest Hills Central 20, Dexter 17 (2OT) A Forest Hills Central defense that has been a big part of the story all season showed well again as the Rangers (13-0) advanced to their first Final since 1994. Quarterback Mason McDonald certainly did his part as well, and especially at crunch time, with a game-tying touchdown pass on the last play of regulation and the game-winning scoring run. Dexter finished its first Semifinal season at 12-1. Click for more from the Grand Rapids Press.

SEMIFINAL Warren De La Salle Collegiate 43, Birmingham Groves 15 The reigning champion Pilots (12-1) once again followed quarterback Brady Drogosh, who scored four touchdowns, while the defense took care of their side with a ninth-straight game of allowing 18 or fewer points. Groves finished 9-4, an excellent comeback from finishing 2-7 last season. Click for more from the Macomb Daily.

SEMIFINAL Muskegon 49, DeWitt 21 After two seasons away, Muskegon (11-2) will return to Ford Field for the fifth time in seven years. Quarterback M’Khi Guy showed the way scoring six touchdowns on the ground and throwing for a seventh. DeWitt, last season’s Division 3 runner-up, finished 9-4. Click for more from the Muskegon Chronicle.

Highlights of the Muskegon vs. DeWitt - Division 3 @MHSAA Football Semifinal

SEMIFINAL Detroit Martin Luther King 52, Mason 17 The reigning champion Crusaders (9-3) also are headed back to the Finals, for the sixth time in eight seasons after shutting down a Mason offense averaging 45 points per game. Dante Moore also offered a few more highlights as his career draws to a close, throwing four touchdown passes. Mason finished a second-straight Semifinal run at 12-1. Click for more from the Detroit Free Press.

SEMIFINAL Grand Rapids South Christian 26, Edwardsburg 20 The Sailors improved to 13-0 and earned their first Finals trip since 2014 by handing Edwardsburg its first loss since the season opener. The Eddies (11-2) pulled within a score late, but South Christian held them off the rest of the way. Click for more from FOX 17.

SEMIFINAL Goodrich 51, Riverview 26 The Martians (12-1) are headed to the season’s final weekend for the first time after piling up their second-most points in a game this season and handing Riverview (12-1) its lone defeat. Jace Simerson ran for five touchdowns to lead the way. Click for more from the Flint Journal.

SEMIFINAL Gladwin 28, Grand Rapids Catholic Central 21 Arguably the stunner of the playoffs goes to the Flying G’s, which is saying a lot since they remain undefeated at 13-0 but also ended Grand Rapids Catholic Central’s three-season Finals streak a win short of extending it to four. The Cougars (11-2) pulled within the final margin late and had the ball, but a Gladwin interception sealed the program’s first trip to the Finals. Click for more from the Bay City Times.

SEMIFINAL Frankenmuth 38, Detroit Country Day 0 The Eagles (13-0) earned their second trip to Ford Field in three seasons with arguably the finest defensive effort of a season full of them as they didn’t allow a first down while posting their fifth shutout. Aidan Hoard threw two touchdown passes and ran for a third score. Country Day finished 8-4. Click for more from the Saginaw News.

SEMIFINAL Negaunee 13, Reed City 12 The Miners emerged from one of the snowiest Semifinals by twice coming back, the second time with the eventual game-winning touchdown run by Kai Lacar. The Negaunee (13-0) also reached its first Finals since 2002 by continuing a run of allowing no more than 15 points in a game this season, and even though Reed City (11-2) averaged 44 per game entering the day. Click for more from the Marquette Mining Journal.

SEMIFINAL Grand Rapids West Catholic 33, Clinton 14 The Falcons are headed back to the Finals for the first time since 2017 by handing Clinton its only defeat and holding the Redwolves (12-1) to their fewest points scoring this fall. Tim Kloska ran for 349 yards and five more touchdowns for West Catholic (12-1). Click for more from FOX 17.

SEMIFINAL Traverse City St. Francis 53, New Lothrop 8 The Gladiators’ dominance seems to become more extraordinary every week as they’re 13-0 for the first time since 2009 and have now won their last two games by a combined 116-8. St. Francis led 20-0 after the first quarter in this one. New Lothrop finished 10-3. Click for more from the Traverse City Record-Eagle.

SEMIFINAL Jackson Lumen Christi 20, Napoleon 7 The Titans (10-3) earned a rematch with one of the opponents that contributed to their 0-3 start this season. Lumen Christi relied on a steady defense that held Napoleon to its fewest points scored in a game this fall. Napoleon also finished its first Semifinal season at 12-1. Click for more from the Jackson Citizen Patriot.

Congratulations to Jackson Lumen Christi. 20-7 win over Napoleon on Saturday in the Division 7 @MHSAA Semifinal. First trip back to the State Finals since 2019. pic.twitter.com/ygnHI7SoeJ

SEMIFINAL Ubly 41, Iron Mountain 14 The Bearcats have equaled St. Francis’ mastery so far, with this their closest game this season. Ubly (13-0) will return to Ford Field for the second time in three seasons after holding Iron Mountain to its fewest points since a Week 1 defeat to Negaunee and scoring the most the Mountaineers (11-2) gave up this season. Click for more from the Huron Daily Tribune.

Here are the highlights of Ubly's win over Iron Mountain in the Division 8 @MHSAA semifinal. 📹 https://t.co/duQnD6sOBJ pic.twitter.com/6TTWtadwg5

SEMIFINAL Ottawa Lake Whiteford 44, Clarkston Everest Collegiate 6 The Bobcats also are headed back to the Finals for the first time since 2017 after defeating Everest (9-4) in the playoffs for the second-straight season. Quarterback Shea Ruddy ran for four scores for Whiteford (13-0). Click for more from the Monroe News.

MHSAA.com's weekly “1st & Goal” previews and reviews are powered by MI Student Aid, a part of the Office of Postsecondary Financial Planning located within the Michigan Department of Treasury. MI Student Aid encourages students to pursue postsecondary education by providing access to student financial resources and information. MI Student Aid administers the state’s 529 college savings programs (MET/MESP), as well as scholarship and grant programs that help make college Accessible, Affordable and Attainable for you. Connect with MI Student Aid at www.michigan.gov/mistudentaid and find more information on Facebook and Twitter @mistudentaid.