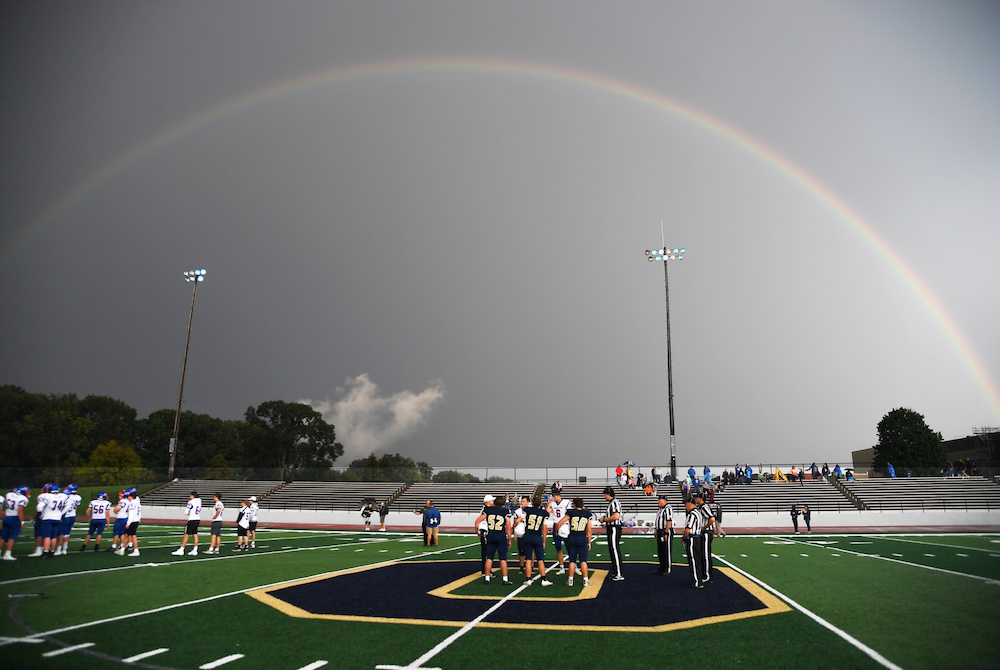 This opening weekend will see all but a handful begin their seasons, with 174 games Thursday, 130 on Friday and five Saturday.

Each week, we’ll again discuss intriguing 11-player games from every region of the state and the 8-player divisions, and special this Week 1 we’ll also take a glance at a matchup from all three of the opening showcase events being played over the next three days.

Nearly 200 games will be broadcast this weekend either on the NFHS Network or Bally Sports Detroit; click here for the schedule. To see a list of all games – and scores as they come in – click here for our Score Center.

Rankings below are by the Michigan High School Football Coaches Association.

The Lakers have high hopes again after winning Division 1 in 2020 and reaching the Regional Finals a year ago. They enter this season ranked No. 2 in Division 1, behind only reigning champion Belleville. But Stevenson will seek to make a statement right away after reaching the Semifinals last season.

Battle at the Big House – University of Michigan – Michigan Stadium

After reaching the Division 1 Final two seasons ago (and falling to West Bloomfield), the Cardinals missed the playoffs last season but did finish on a 4-1 run and had two defeats by three points – including 29-26 to Clarkston in the opener. The Wolves will be playing their first game under former assistant Justin Pintar, who took over after the retirement of Kurt Richardson, who was 274-98 from 1987-2021.

The Bobcats’ only loss last season came to eventual Division 1 runner-up Rochester Adams in a Semifinal, and they enter ranked No. 8 in the division under first-year coach Kaleb Forr – who previously led Flint Kearsley to its first District title in 2020. Grandville is a consistent Ottawa-Kent Conference Red contender and coming off a third-straight seven-win season.

Freeland is opening the season ranked No. 6 in Division 4 after making a run to last year’s Semifinals – and losing only 30-27 in that game to eventual champion Chelsea. The Falcons’ campaign last season began with a 24-14 Week 1 win over Clare, which is coming off its 16th-straight winning season. But the Pioneers have something of a new look this fall; longtime assistant Steven Spranger has taken over the program from Kelly Luplow, who retired with a 251-95 record from 1987-2021.

Adams played as long as possible last fall, reaching the Division 1 championship game before suffering its lone loss of the season, to West Bloomfield. The Highlanders are capable of that sort of run again and enter the season ranked No. 3 in Division 1. St. Mary’s is another program replacing a longtime coach, as past star Jermaine Gonzales has taken over for retired George Porritt, who was 278-94 from 1989-2021. The Eaglets enter this fall ranked No. 4 in Division 4.

This is the second year in this series of openers between the annual Division 7 championship contenders, with Lumen Christi winning last year’s matchup 27-14. The Titans ended up advancing to the Semifinals, while New Lothrop lost to eventual champion Pewamo-Westphalia in a District Final. There’s every reason to think those high-level opportunities will be possible again, as Lumen enters No. 4 and New Lothrop No. 5 in the Division 7 rankings.

Kingsley owns a 5-3 edge during this latest series between these longtime rivals, with the Stags winning big last fall to kick off what ended up turning into another playoff season for both programs. That’s an expectation again for both. Kingsley enters ranked No. 6 in Division 5 and carrying a combined 40-6 record over the last four seasons. McBain is right there at 35-16 over five straight winning campaigns.

While it would be easy to put the matchup of traditional heavies Hudsonville and Saline here, there’s a lot to talk about as well with Notre Dame Prep taking a trip to Clinton. This will be another nonleague game that eventually should benefit both in playoff points – win or lose. Notre Dame Prep is opening ranked No. 5 in Division 5, while Clinton is No. 5 in Division 6 coming off last season’s District title.

This could be a preview of a Division 8 playoff matchup, as both are expected to be among contenders – Reading entering the season ranked No. 5 and White Pigeon No. 7. They’ve managed to elude each other in playoffs past although that nearly came to an end last fall, when Reading fell to eventual champion Hudson in a District opener and White Pigeon was edged by the Tigers 8-0 in the Regional Final.

The Mountaineers have won all three matchups since this one went to opening night in 2018, but by only three, three and two points – 14-12 last season – respectively. Starting with a win is even more important as they’re both likely to contend again in the always-loaded Western Peninsula Athletic Conference Copper. Additionally, Iron Mountain enters this fall ranked No. 9 in Division 8.

Edwardsburg has lived among the elite for more than a decade, its only loss last season in the Division 4 Semifinal to Hudsonville Unity Christian. The Eddies enter this weekend ranked No. 5 in that division but facing an opponent that took a mighty step last season toward returning to championship contender status. The Falcons improved three wins last fall and enter this one ranked No. 2 in Division 6.

These league foes met twice last season, Martin winning 28-20 during the regular season and 41-22 in a Division 1 Regional Final. The first round decided the Southwest Michigan 8-Man Football League Tier 1 championship, and this one could eventually do the same. Martin enters ranked No. 4 in Division 1, and Mendon is No. 8 in Division 2.