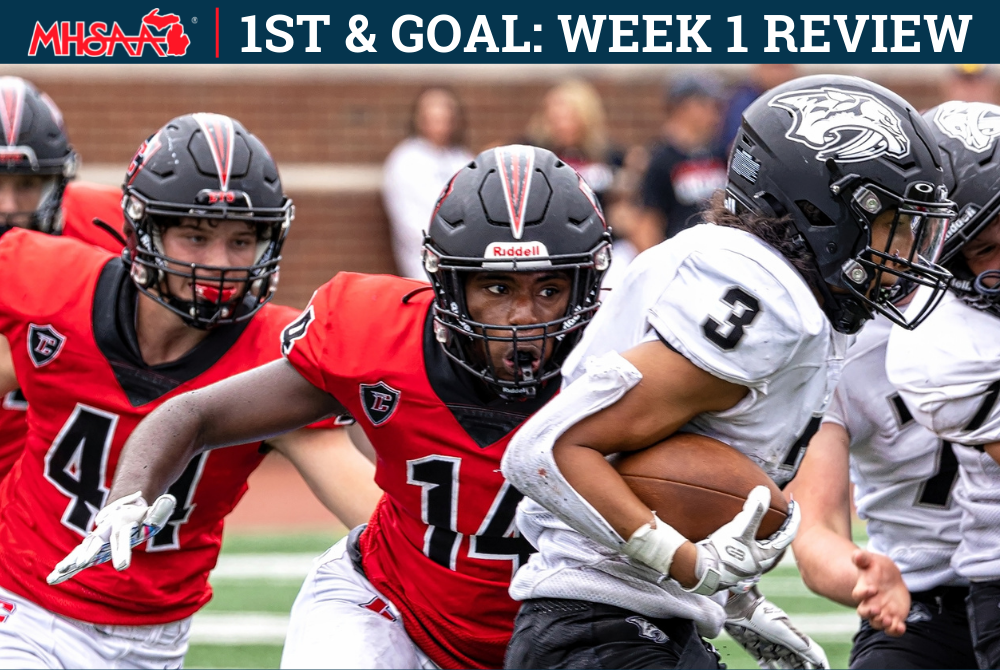 Another slate of season openers meant another fresh start for more than 600 varsity football teams across Michigan this past weekend.

And plenty made it count.

Three reigning MHSAA champions and three more 2021 Finals runners-up were among those starting out 0-1 this fall, while Lansing Waverly, Armada, Allegan and Litchfield were among many who celebrated what they hope will be just the start of special seasons to come.

See below for many of the most notable results from all over Michigan as we take a glance at Week 1.

HEADLINER Davison 28, Clarkston 21 After opening with a three-point loss to Clarkston last season and then missing the playoffs, Davison has switched lanes on the first and set itself up well in the early going for the second. The Cardinals made some big plays late to get past the Wolves this time during the Battle at the Big House at University of Michigan. Click for more from the Flint Journal.

Here's the highlights of Davison beating Clarkston 28-21 at the Battle At The Big House on Thursday.

Watch list Fenton 46, Midland Dow 7 The Tigers are coming off their first sub-.500 season since 2007, but that might be a distant memory soon if this win over the Division 2 Chargers is an indication.

On the move Montrose 27, Clarkston Everest Collegiate 0 Everest averaged 38 points per game last season but couldn’t get on track against a Rams defense that had two shutouts a year ago. Frankenmuth 27, Goodrich 2 This might be a sign that a strong Frankenmuth defense from last season will be tough to deal with again. Midland 27, Cadillac 21 The Chemics, winners of two games last season, opened with a solid one over a Cadillac program that finished 9-3 a year ago.

HEADLINER Clinton Township Chippewa Valley 20, Detroit Catholic Central 16 This is the type of titanic opening-night matchup we anticipate all offseason, and Chippewa Valley came on strong at the end after trailing by 10 at halftime. The Big Reds also had won last season’s opener between the two. Click for more from the Detroit Free Press.

Watch list Armada 28, Marine City 27 Last year’s first winning record in a decade may have just been the start as the Tigers opened by edging last season’s Division 5 runner-up.

On the move Trenton 6, Chelsea 3 The Trojans reversed last year’s 40-0 loss to the eventual Division 4 champ. Redford Union 26, Pewamo-Westphalia 6 The Panthers also avenged a 2021 defeat to an eventual champion after falling to Division 7 winner P-W 33-6 a year ago. Southfield Arts & Technology 56, Detroit Cass Tech 54 The Warriors are seeking their first winning season since 2016 and should have plenty of momentum after avenging last season’s 49-22 loss to the Technicians.

HEADLINER Lansing Waverly 18, Lansing Catholic 7 This might be Waverly’s best win since clinching a playoff spot in 2012 – or even going back to defeating Grand Ledge in 2002. The Warriors gave up 33 points a game in winning only two last season, but shut down the reigning Division 6 champion Cougars in arguably the biggest upset in the state during Week 1. Click for more from the Lansing State Journal.

Watch list DeWitt 21, Haslett 14 Rivalry restored? It may be early to say that much, but this Battle at the Big House – and first matchup of these two past rivals since 2017 – featured a shutout by the Panthers’ defense but two return touchdowns by the Vikings’ Nakai Amachree.

On the move New Lothrop 12, Jackson Lumen Christi 7 The Hornets won arguably the most anticipated small-school opener in the state, avenging last season’s 27-14 loss to the Titans – who went on to make the Division 7 Semifinals. Brighton 35, Dearborn Fordson 14 Both are likely contenders in their respective divisions of the Kensington Lakes Activities Association, Brighton especially making some noise with this win after finishing 4-5 a year ago. East Lansing 21, Portage Central 15 This was switched late from an East Lansing home game to a trip to Portage, but the Trojans made the best of it against a Mustangs team that won nine games in 2021.

HEADLINER Traverse City Central 49, St. Joseph 28 The Trojans traveled to Ferris State for their first game since finishing Division 2 runner-up last fall at Ford Field, and defeated a St. Joseph program that reached the Division 3 Semifinals last season. The win might prove especially notable with Lapeer and Davison up next and then a first-time run through the newly-configured Saginaw Valley League. Click for more from the Traverse City Record-Eagle.

Watch list Gaylord 15, Lake Fenton 14 Gaylord had won a combined five games over the last three seasons, and this story gets better with Lake Fenton coming off a nine-win campaign.

On the move Kingsley 40, McBain 0 The Stags are on an impressive four-year run and looking to make it five while opening in a big way against another regular playoff qualifier. Traverse City West 7, Marquette 0 The Titans avenged last season’s 28-17 loss in a rematch of 2021 playoff teams. Cheboygan 52, Lake City 26 The Chiefs are seeking their first winning season since 2013, and this is a strong start after the team went from zero wins in 2020 to three a year ago.

HEADLINER Reading 33, White Pigeon 14 Expectations are high for both of these teams as Reading entered the season ranked No. 5 in Division 8 with White Pigeon right there at No. 7. The Rangers posted notable showings on both sides of the ball in this one after averaging 26 points per game and giving up 16 per game last year.  Click for more from the Hillsdale Daily News.

Watch list Hillsdale 35, Jonesville 12 The Hornets have tough tasks with Berrien Springs and Hudson up next but should enjoy some added spark after breaking Jonesville’s 13-game regular-season winning streak.

On the move Carleton Airport 35, Ida 32 The Jets avenged last season’s season-opening 43-26 loss as they seek a first winning record since 2019. Manchester 20, Whitmore Lake 6 The Flying Dutchmen are seeking their first winning season since 2015, and opened this one by defeating a 2021 playoff qualifier. Ottawa Lake Whiteford 36, Blissfield 20 It’s a new era but familiar start at Whiteford, as the Bobcats earned first-year head coach and former assistant Todd Thieken his first varsity win with the program. 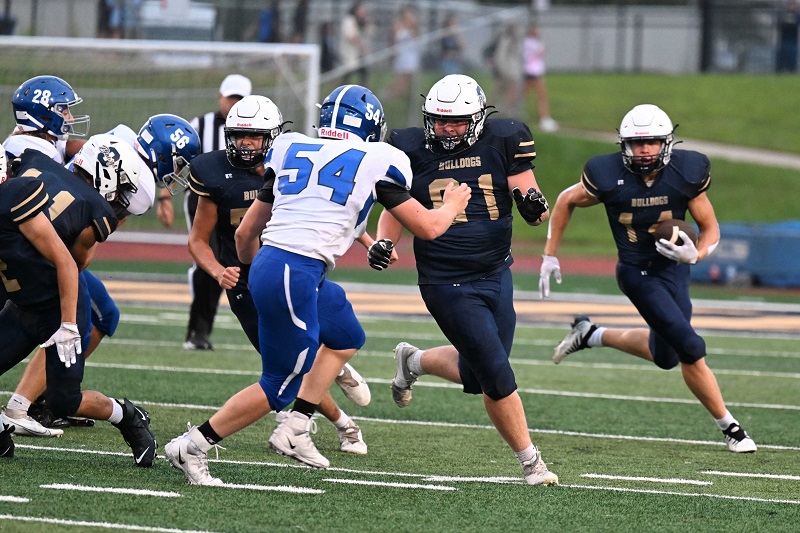 HEADLINER Battle Creek Lakeview 28, Battle Creek Harper Creek 6 The Spartans ran their winning streak over Harper Creek to three with their best defensive showing in two years. That’s especially significant with one of the tougher Septembers in the state coming up – River Rouge next followed by four of the usual contenders in the Southwest Michigan Athletic Conference. Click for more from the Battle Creek Enquirer.

Watch list Centreville 20, Union City 14 The Bulldogs have been one of the state’s top small-school programs the last five seasons and opened with a win over a playoff qualifier from last fall.

On the move Portage Northern 41, Vicksburg 27 This should benefit both as Northern is a Division 2 team looking to bounce back this fall and Vicksburg in Division 4 won eight games a year ago. Buchanan 46, Saugatuck 20 The Bucks fell back in 2021 but could be bouncing back after defeating a Saugatuck program coming off a playoff berth. Plainwell 21, Otsego 7 The Trojans improved to 71-44-6 all-time against Otsego in a rivalry that goes back to 1896.

HEADLINER Houghton 14, Ishpeming Westwood 12 The Gremlins’ first win over Westwood since 2016 also avenged a 52-8 loss to the Patriots from a year ago and may have reshuffled the Western Peninsula Athletic Conference Copper race right at the start. Houghton also is coming off its best season since 2013, while Westwood made the Regional Finals in Division 7 a year ago. Click for more from the Houghton Daily Mining Gazette.

Watch list Negaunee 19, Iron Mountain 14 The Miners avenged a 2021 loss to another West PAC Copper contender, adding another wrinkle as that conference gets rolling.

On the move St. Ignace 26, Tawas 6 The Saints are 1-0 for the first time since 2016 and after winning a combined three games over the last two seasons. Gladstone 42, Calumet 13 Gladstone ran its winning streak over Calumet to two, even more impressive this time as the Copper Kings are coming off a 9-3 campaign. Menominee 40, Marinette (Wis.) 6 The 116th game of this rivalry upped Menominee’s overall record against Marinette to 58-51-7.

HEADLINER Whitehall 54, Hudsonville Unity Christian 26 The Vikings have posted some impressive wins over the last two seasons as they’ve rejoined the elite in the West Michigan Conference. But from a statewide point of view, this victory is right up there with their best work. Unity Christian was last season’s Division 4 runner-up, and also averaged 57 points per game – making this another notable performance for a Whitehall defense that has given up only 13.6 points per game over the last two seasons. Click for more from the Muskegon Chronicle.

On the move Grandville 49, Grand Blanc 25 The Bulldogs should be contenders again in the Ottawa-Kent Conference Red after this win over a 2021 Division 1 semifinalist. Allegan 55, Cassopolis 0 The Tigers haven’t won more than two games in a season since 2011 – but opened with a sizable victory over a program with eight straight playoff appearances (and nine counting 2020 when everyone made it). Grand Rapids South Christian 42, Grand Rapids Christian 7 The Sailors made it two opening-week wins over the Eagles in two seasons as they seek to contend again in the O-K Gold.

HEADLINER Martin 30, Mendon 28 The Clippers were down 20-8 at halftime of a game that despite being played Week 1 could decide a league title. But they came all the way back to earn their third victory over the Hornets in three tries over the last two seasons. Click for more from the Sturgis Journal.

Watch list Pickford 28, Gaylord St. Mary 16 The Panthers won their second opener in a row over the Snowbirds and after both made the playoffs last season.

On the move Grand Rapids NorthPointe Christian 65, Suttons Bay 19 The Mustangs handed Suttons Bay its first regular-season loss since 2018, also avenging a 30-12 defeat from last fall. Litchfield 34, Bellevue 24 The Terriers put an end to their 20-game winless streak that went back to 2019. Alcona 82, Mio 52 These two wasted no time putting together one of the highest-scoring 8-player games in MHSAA history.

PHOTOS (Top) A Livonia Churchill defender wraps up a Plymouth ball carrier during Churchill’s 32-14 win over Plymouth at University of Michigan. (Middle) An Otsego ball carrier looks for an opening against Plainwell. (Top photo by Douglas Bargerstock; middle photo by Gary Shook.)