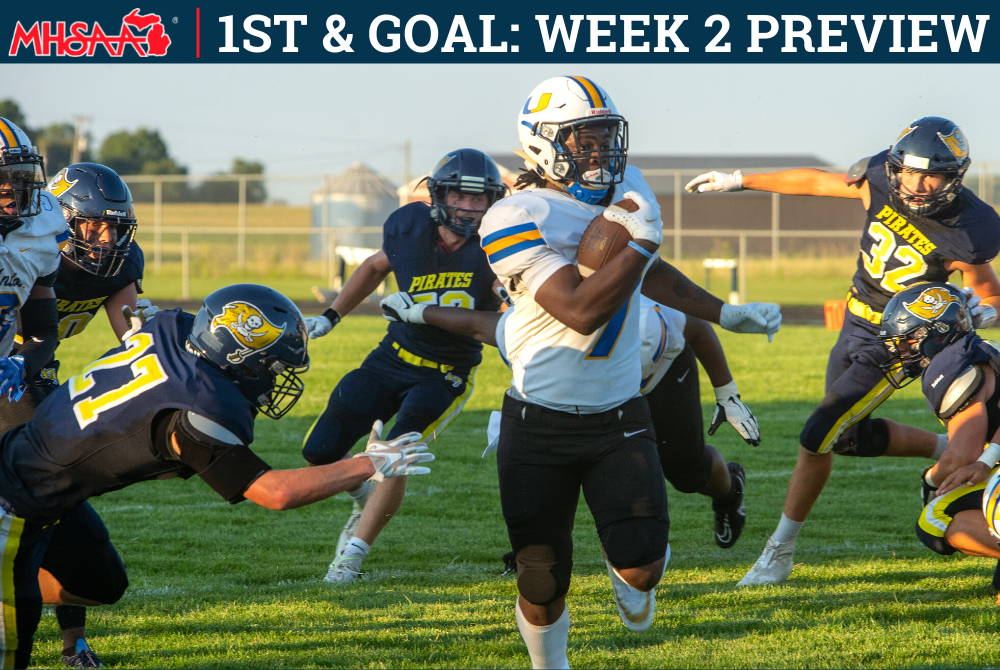 Week 1 of this football season, as is annually the process, was filled with teams grabbing our attention with strong and often unexpected first impressions.

Week 2 is the beginning of making those impressions stick.

Both were among Week 1 winners to give the strongest notice, with Fenton defeating Midland Dow in a big way and East Lansing going on the road and downing Portage Central. The Trojans won last year’s matchup 33-7 on the way to finishing 7-4 overall, but this also looks early like a much-improved Tigers team from the one that ended 2021 at 4-5.

Southfield A&T made perhaps the most stunning entrance of all Week 1, defeating Detroit Cass Tech 56-54 in overtime with junior quarterback Isaiah Marshall throwing six touchdown passes and running for two more scores. Up next are the Wolves, who lost 28-21 to Davison last week but won last season’s Southfield matchup 56-27. Sidenote: The last six years these two were in the same Oakland Activities Association division, and this season they are not.

The Raiders have won both recent meetings between these Lansing area powers, in 2019 and then 20-17 a year ago on the way to the Division 5 Semifinals. Portland opened with a big win over Ovid-Elsie, while DeWitt – the reigning Division 3 runner-up – put up an especially strong defensive performance in defeating Haslett last week at University of Michigan. With both expected to do big things again, this one should benefit both in playoff points whichever team comes out on top.

The Owls joined the Northern Michigan Football League last fall, playing in the Legacy division, and this will be their first matchup with the annually-contending Lakers as Glen Lake moved to the Legacy this season. Oscoda missed the playoffs last year for the first time in five, but finished on a four-game winning streak and opened last week with a solid win over Houghton Lake. The Lakers are coming off a similar situation, having won their final three regular-season games last fall to reach the playoffs at 4-5, but they’re coming off a defeat against Kalkaska.

These two were both one win away from facing each other in last season’s Division 7 Final, as both saw their seasons end in Semifinals on opposite sides of the bracket. They very well could meet twice this season – St. Francis is ranked No. 2 and Lumen Christi No. 3 in Division 7, with the latter coming off a 12-7 loss to top-ranked New Lothrop. The Gladiators, meanwhile, opened with a league win over Ogemaw Heights.

The memory of Schoolcraft’s uncharacteristic 3-5 finish a year ago is fading quickly after a major shut out last week of Comstock, and defeating the Bulldogs would further add momentum to the fresh start. The Bulldogs are ranked No. 6 in Division 8 coming off a solid win over Union City, and they defeated Schoolcraft last season 28-7.

This might be the statewide game of the weekend, as these two perennial powers meet for the first time since 2018. Rockford is ranked No. 4 in Division 1, coming off a big win over East Grand Rapids. Mona Shores is No. 2 in Division 2 after a similarly-solid performance against Wisconsin’s Manitowoc Lincoln. Obviously the rosters have completely turned over, but the Sailors did own a 3-2 advantage in five games against Rockford from 2014-18.

Despite watching its enrollment fall 30 percent over the last six years, Breckenridge became one of the strongest teams in 11-player Division 8 going 56-11 from 2016-21 before making the move to 8-player this fall. The Huskies edged Fulton 40-36 last season and now get a familiar opponent in Merrill, which played in the same league as Breckenridge from 2016-19 before switching formats. The Vandals opened last week with a significant shut out of Webberville.