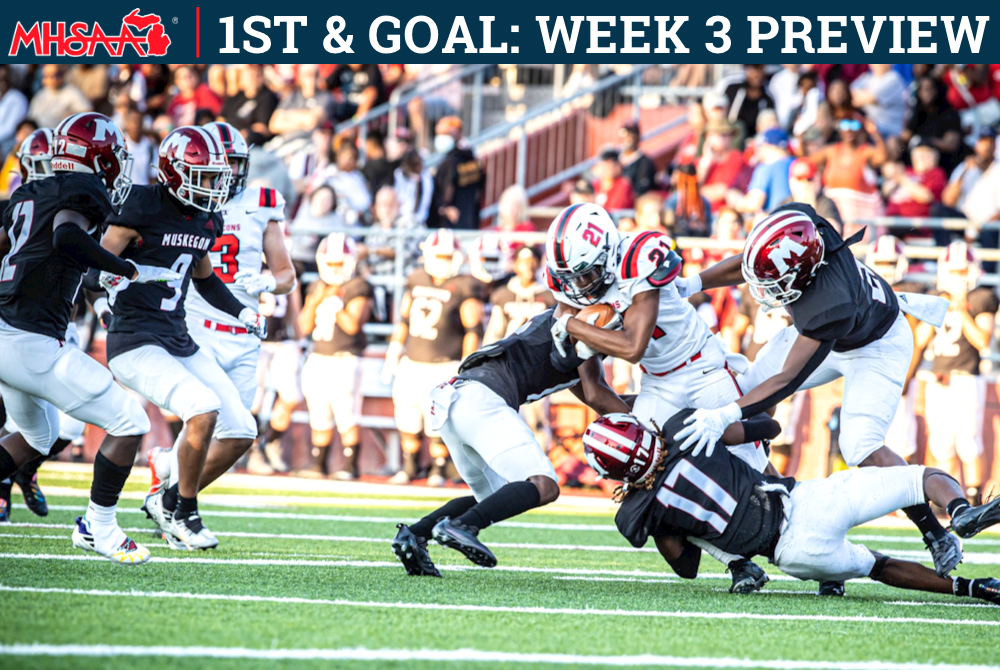 With Labor Day behind us, all Michigan high schools are back in session – and just in time for league competition to begin for several conferences across the state.

League matchups make up most of our “games to watch” as we prep for Week 3, with the most intriguing from every region highlighted below.

The way this season has begun – and the way last season ended – makes this matchup look like a potential title-decider in the Blue Water Area Conference. Croswell-Lexington was last year champion, thanks in part to holding off co-runner-up Armada 30-14 in the final game on the league schedule. The Pioneers have outscored their first two opponents this fall by a combined 95-14, while Armada made a loud statement immediately with a 28-27 season-opening win over Marine City, last season’s Division 5 runner-up.

Belleville is off to another strong start this fall coming off last season’s Division 1 championship. But tonight’s matchup could help the Tigers do one better this fall in their repeat attempt. Churchill last season won the Week 3 meeting 28-21, handing Belleville its first regular-season loss since 2016 and only loss of 2021. But the Chargers must bounce back quickly to make this game another classic after seeing a seven-game winning streak against Westland John Glenn end with a 21-20 loss last week.

The Bees are off to their best start since 2017, already avenging one loss from when the team finished 2-7 a year ago. But this matchup could tell a lot more about where Bath is headed in 2022. The Bees fell to Fowler 47-14 last season and will be seeking to break a five-game losing streak to the Eagles. Fowler has opened with wins over 2021 playoff qualifiers Carson City-Crystal and Petersburg Summerfield, both by 20-plus points.

The Saints own one of the best rebound stories of the early going after finishing 2-7 a year ago and winning one game in 2020. They’ve outscored their first opponents by a combined 74-6. Granted, both opponents are winless so far this season and were winless last year as well, but Frankfort will give St. Ignace a better idea how it measures up in what should be a super-competitive Northern Michigan Football League Legacy division. The Panthers have followed their best finish (6-4) since 2017 with a pair of big victories including last week over 2021 playoff qualifier Mancelona.

This Saturday showdown presents some interesting possibilities as both look to rise in the Cascades Conference. Napoleon was a contender into October last season before losing the final two games on the league schedule, but was in play in part thanks to a 20-18 win over Manchester in Week 3. The Flying Dutchmen have factored into the race a couple of times since their league title season of 2015, and edged reigning Cascades champion Addison 29-26 last week to re-enter the mix.

Lawton is off to another solid start coming off last season’s run to the Division 7 championship game, and additionally the Blue Devils have won 12 straight regular-season games and 25 of their last 26. All but two of those 25 wins were by double digits – with the lone loss to Schoolcraft in 2020 – but Lawton also hasn’t played Constantine since 2017. The Falcons saw their 15-game regular-season winning streak end with a 22-20 loss to reigning Division 8 champion Hudson last week. Before that, no regular-season opponent had come within single digits of catching Constantine since the second game of 2020.

The Maroons regained the Great Northern Conference title last season, sharing it with Kingsford, but earned that claim also because they were able to survive a 35-34 challenge from Gladstone. Menominee has won three straight in this series, but is coming off a rough outing last week against an opponent from Illinois. Gladstone, meanwhile, is off to its third 2-0 start in four seasons but looking to get to 3-0 for the first time since 2017. There’s a little more reason for excitement this time though – both of those first two wins came against 2021 league champions.

On first glance, this might not seem like much more than the next chapter in a rivalry. But there is some near-uniqueness to this rivalry – it’s one of the few in Michigan where the schools are next door to each other. West has won the last four meetings, including a matchup during the 2019 playoffs, and has rocketed to wins over Stevensville Lakeshore and Cedar Springs – two playoff teams from last season. East’s losses, however, also have come to 2021 playoff qualifiers – Williamston and Spring Lake – and the Chix lost to the Lakers by just seven points.

Two-time reigning Division 2 champion Powers North Central has set the pace lately in the Great Lakes Conference West. But the league is full of contenders. The Jets are ranked No. 1 this week, but Crystal Falls Forest Park is No. 3, Lake Linden-Hubbell is No. 5 and Norway could make its way into the Division 1 top 10 with a win over the Lakes. The Knights won last season’s meeting 30-8 and have opened this fall outscoring its first two opponents by a combined 102-12. Lake Linde-Hubbell’s margin is a similar 119-30.

PHOTO: A trio of Muskegon defenders bring down an East Kentwood ball carrier during the Big Reds’ 20-14 season-opening win. (Photo by Tim Reilly.)