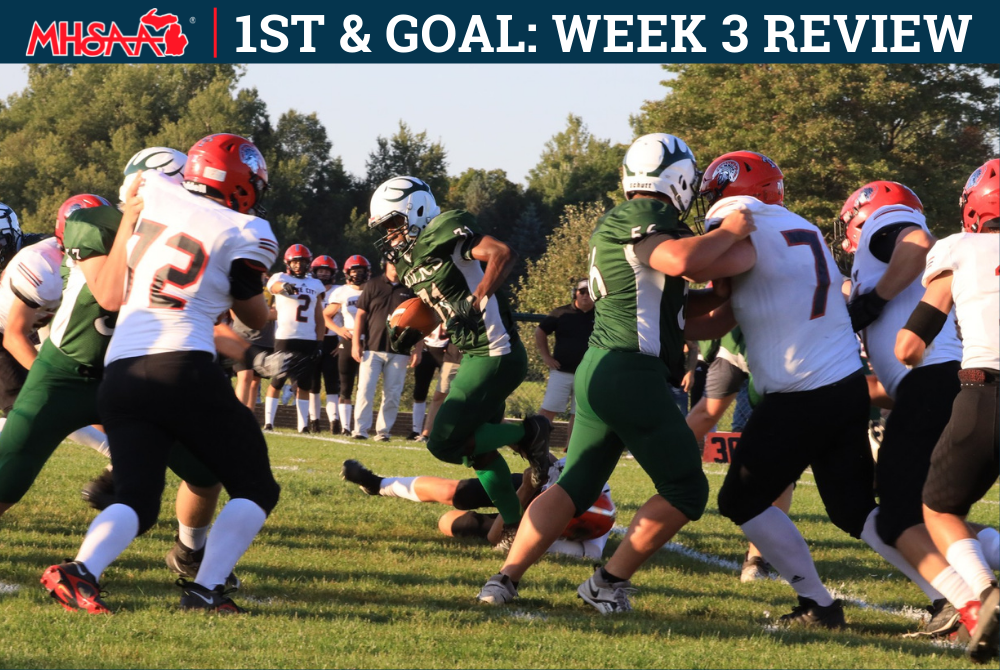 At first glance from a mile-high view last week, Michigan’s Week 3 high school football schedule didn’t have a ton of matchups that popped off the page.

But when there are only nine regular-season games and only 288 teams that move on to the playoffs, every matchup matters much more.

And of course, plenty found a way to grab our attention. We check in on 45 below.

HEADLINER Croswell-Lexington 34, Armada 12 The reigning Blue Water Area Conference champion Pioneers (3-0) took a big-time step toward a possible repeat, as Armada (2-1) has received a lot of attention for its turnaround over the last two seasons including its fast start this fall. Croswell-Lexington quarterback Gavin Espinoza starred as his team ran its league winning streak to 12. Click for more from The Sports Report.

On the move Davison 49, Traverse City Central 14 The Cardinals (2-1) bounced back from a Week 2 loss to Detroit Catholic Central to send the reigning Division 2 runner-up to 1-2. Bay City Western 21, Traverse City West 0 The Warriors (2-1) welcomed Traverse City West (1-2) to the Saginaw Valley League, earning their first shutout since 2019. Saginaw Swan Valley 27, Essexville Garber 21 After a tough start but against two league championship contenders, Swan Valley (1-2) is on the board with this win over the Dukes (2-1). If history holds, they may see each other again in the playoffs for the fourth-straight season.

HEADLINER Clarkston 45, Rochester Adams 35 A score-fest during the first half – Clarkston led 42-28 at the break – did eventually slow down as the Wolves (2-1) handed the reigning Division 1 runner-up Highlanders their first regular-season loss since 2019. The win also gives Clarkston an important edge to start the Oakland Activities Association Red schedule, as Adams (2-1) rejoined the division after winning the OAA White a year ago. Click for more from the Oakland Press.

🏈 Here's the highlights of the Clarkston at Rochester Adams game that aired on Football Fridays Overtime powered by STATE CHAMPS! on @BallySportsDET #MIFTBL | @ThinkFordFirst pic.twitter.com/jFigQiOms6

On the move Detroit Catholic Central 45, DeWitt 38 (OT) This looks great for both teams; DCC (2-1) for holding on against another of the state’s top programs, and the young but talented Panthers (2-1) for pushing a Division 1 power to overtime. Detroit Country Day 28, Warren Michigan Collegiate 20 All three of Country Day’s wins have come against 2021 playoff qualifiers, with Michigan Collegiate (2-1) last season’s Division 7 runner-up. Plymouth 16, Canton 0 After back-to-back one-win seasons, Plymouth (1-2) earned the first of this fall to avenge losing to rival Canton (1-2) by 50 a year ago.

HEADLINER Hastings 24, Jackson Lumen Christi 21 The Saxons shared last season’s Interstate 8 Athletic Conference championship, a 33-22 loss to Lumen Christi keeping Hastings from the outright title. But the Saxons held off the Titans this time for their second win in the series over the last three seasons – and sent Lumen Christi to 0-3, although those losses have come to teams that sit a combined 8-1. Click for more from The Hastings Banner.

Watch list Ithaca 48, Saginaw Nouvel 6 The Yellowjackets (2-1) started their league title 13-peat pursuit well, stopping a Panthers offense that had scored a combined 93 points over their 2-0 start. Ithaca, currently in the Tri-Valley Conference West 2, has won outright or shared its league’s championship every season beginning with 2009.

On the move Mount Pleasant 27, Cadillac 24 The Oilers (3-0) ran their regular-season winning streak to 15 with their closest victory of the run. Cadillac (1-2), notably, has two one-score defeats. Holt 14, Grand Ledge 6 The Rams’ rebound may be starting as Holt (1-2) ran its winning streak over the rival Comets (2-1) to three. New Lothrop 55, Clarkston Everest Collegiate 0 The Hornets (3-0) are among the most impressive teams in the state through the first third of the regular season, as Everest was 9-3 last fall – but is off to a 1-2 start this time after opening with three 2021 playoff teams.

HEADLINER Boyne City 34, Grayling 6 These two go back most of the last two decades as league opponents, then ended up in separate leagues the last two seasons but faced off in the playoffs, splitting those games with Boyne City winning by a point last year. They are still in different divisions of the Northern Michigan Football League, but the Ramblers (3-0) will enter Leaders play with plenty of momentum coming off their best defensive performance. Grayling will take a 1-2 record into the Legends division. Click for more from the Petoskey News-Review.

Watch list Elk Rapids 30, Tawas 14 The Elks (3-0) have now won as many games this season as over the last two combined, and have yet to allow more than two touchdowns this fall.

On the move Kingsley 30, Ogemaw Heights 20 The Stags (2-1) bounced back from a one-point Week 2 loss to Gaylord to set up this week’s matchup with rival Traverse City St. Francis. Traverse City St. Francis 49, Benzie Central 12 The Gladiators (3-0) also are riding high after moving to 2-0 in the NMFL Legends. Lake City 44, Manton 0 After losing the season opener to Cheboygan, Lake City (2-1) hasn’t allowed a point and handed Manton (2-1) its first defeat after the Rangers had topped 30 points both of their first two games.

HEADLINER Tecumseh 35, Pinckney 14 An early slate of three opponents that made the playoffs last season might have seemed a little daunting as Tecumseh was starting this season pursuing its first winning record since 2013. But Tecumseh (3-0) is setting the pace, adding this win to victories over Michigan Center and Richland Gull Lake to start the fall. Click for more from the Adrian Daily Telegram.

Watch list Carleton Airport 33, Monroe St. Mary Catholic Central 14 The Jets (3-0) are coming off back-to-back four-win seasons but have nearly equaled that victory total already, with this one also avenging a 35-26 loss to SMCC from last season.

On the move Addison 48, Hanover-Horton 39 The Panthers (2-1) bounced back from their Week 2 loss by grounding a Comets team that was coming off a big win. Clinton 18, Ida 6 The Redwolves (3-0) have added a solid Lenawee Country Athletic Association win to a big overall start, as Ida was the runner-up in the league a year ago. Napoleon 30, Manchester 25 Add the Pirates (3-0) to the list of contenders in the Cascades Conference after their most impressive win so far, as they handed Manchester (2-1) its lone defeat.

HEADLINER Portage Central 16, Battle Creek Lakeview 13 Not so fast, to anyone who had counted out Portage Central after its 0-2 start. The Mustangs began Southwestern Michigan Athletic Conference play with this win over the only league team that had begun 2-0. Central (1-2) came back from a 13-0 halftime deficit to catch the Spartans (2-1). Click for more from the Battle Creek Enquirer.

Watch list Sturgis 55, Plainwell 35 The Trojans (2-1) defeated Plainwell (2-1) for first time since 2015, with Jacob Thompson scoring six touchdowns and throwing for a seventh.

On the move Constantine 47, Lawton 21 The Falcons (2-1) put Lawton’s regular-season winning streak of 12 games to an end with 33 unanswered points. Schoolcraft 33, Kalamazoo United 29 The Eagles trailed by multiple scores but went ahead during the final minutes to get to 3-0. Benton Harbor 28, Muskegon Catholic Central 20 The Tigers (2-1) broke a three-game losing streak against MCC (1-2) and equaled their win total from all of last season.

HEADLINER Gladstone 28, Menominee 6 Make that three 2021 league champions that Gladstone (3-0) has defeated to begin this fall, as the Braves look to be in control in the Great Northern Conference after defeating last season’s co-champions Kingsford and Menominee in successive weeks. Gladstone hadn’t defeated Menominee since 2018, and fell by a point in last year’s meeting. Click for more from RRN Sports.

Watch list Iron Mountain 28, Houghton 6 After a five-point loss to Negaunee in the season opener, the Mountaineers have dominated their next two opponents by a combined score of 62-6. Houghton (2-1) had given up only 18 points total over its first two games.

On the move St. Ignace 28, Frankfort 0 The Saints’ first two wins were over teams that didn’t win a game last year or yet this fall, but defeating Frankfort (2-1) brings another level of impressiveness to St. Ignace’s 3-0 start. Marquette 17, Gaylord 14 The Blue Devils (2-1) were one of the most intriguing teams in the state after two weeks, but Marquette (1-2) pushed past after losing both of its first two games by one score. Escanaba 33, Petoskey 30 After losses to a pair of tough teams to start, Escanaba (1-2) picked up its first victory and will eclipse last year’s win total with another one.

HEADLINER Grand Rapids Catholic Central 21, Cedar Springs 20 The Cougars’ now 40-game winning streak received its toughest challenge yet as GRCC (3-0) needed a late stop on a 2-point conversion attempt to open the Ottawa-Kent Conference Blue schedule with another win. It was the third one-pointer during the streak; Cedar Springs was part of another when GRCC won last year’s meeting 41-40. Click for more form FOX 17.

Watch list Grand Rapids Forest Hills Central 21, Byron Center 13 The Rangers (3-0) may have taken a big step toward repeating in the O-K White, as Byron Center finished third a year ago.

On the move Hudsonville Unity Christian 28, Coopersville 27 After a pair of defeats to strong teams to start the season, Unity started off the O-K Blue schedule right by edging the Broncos (2-1). Ludington 7, Fremont 0 The Orioles (3-0) won a matchup of undefeated teams in the new West Michigan Conference Lakes, with likely favorite Muskegon Oakridge up next. Muskegon 28, Muskegon Reeths-Puffer 20 This was the closest game between these two since 2011, but the Big Reds held on to start off the O-K Green schedule.

HEADLINER Norway 40, Lake Linden-Hubbell 26 The Knights (3-0) are climbing the ladder of contenders after getting past another challenger in the Great Lakes Eight Conference West and with also-undefeated Crystal Falls Forest Park up next. Norway reached 40 points for the third time in three games to hand Lake Linden-Hubbell (2-1) its lone defeat. Click for more from the Iron Mountain Daily News.

Watch list Bridgman 56, Mendon 50 The Bees (3-0) scored 14 unanswered points during the fourth quarter to extend their winning streak to 16 and earn their second in two years over the Hornets (1-2).

On the move Lawrence 32, Wyoming Tri-unity Christian 28 The Tigers (1-2) hadn’t been close in their first two games, but found their stride in handing the Defenders (2-1) their lone defeat.  Mio 46, Hillman 42 The Thunderbolts (2-1) are putting up some big offensive numbers and needed to this time again against the Tigers (1-2). New Haven Merritt 38, Bay City All Saints 30 The Mustangs (1-2) mounted a major comeback to earn their first victory.