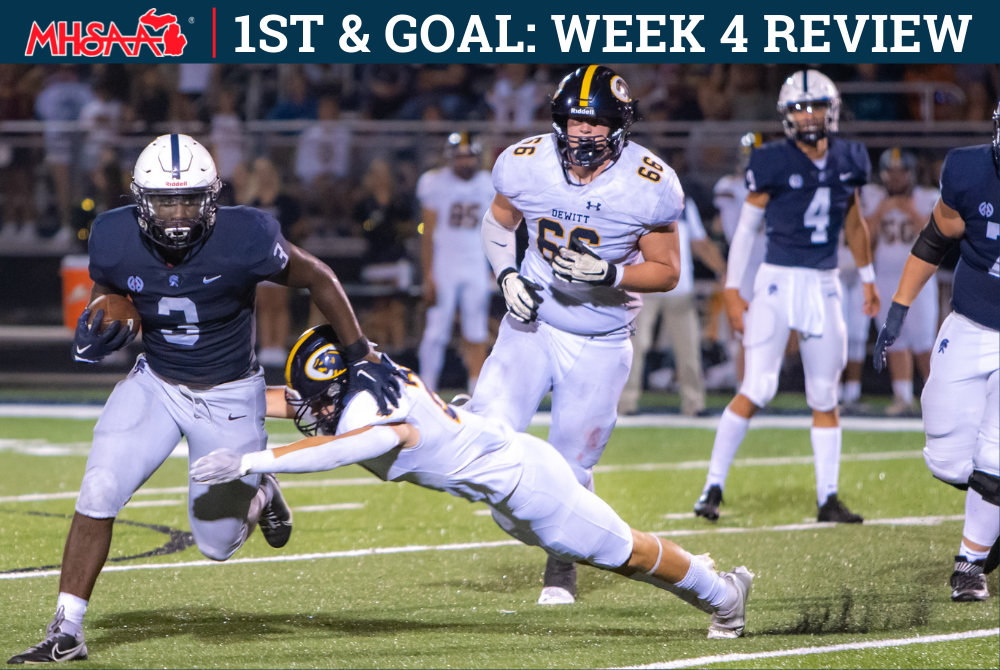 All winning streaks eventually end. And in mentioning them, it is more in recognition of what was accomplished than what is now over.

A couple of those endings took center stage during Week 4.

In 8-player, Adrian Lenawee Christian lost its first game since switching from 11-player at the start of 2020, and a week after tying Powers North Central’s 8-player record of 27 straight victories from 2015-17. Colon ended the streak, while the same weekend North Central’s current team also tied their record with a 27th-consecutive win.

See below for many more headliners as we move toward the midpoint of the regular season this week.

HEADLINER North Branch 34, Almont 14 There are four strong contenders for the Blue Water Area Conference title, but it’s starting to feel like the decider will be the Week 8 matchup between North Branch (4-0) and Croswell-Lexington. Almont (3-1) can still impact this race – the Raiders see Armada this week and Croswell-Lexington next – but the Broncos have to feel pretty good about getting this one out of the way. Click for more from The Sports Report.

Watch list Bay City Western 70, Midland Dow 41 It was only five years ago that Western scored 45 points for the season, but in this victory the Warriors (3-1) went over 60 for the third time over the last two seasons – and after playing Dow (2-2) to a one-point loss and two-point playoff win last fall.

On the move Ubly 42, Harbor Beach 0 Two games into the league schedule, the Greater Thumb Conference East appears strongly in Ubly’s grasp, as the Bearcats (4-0) upped their average margin of victory overall this season to 46-7 while handing the Pirates (3-1) their lone loss. Davison 56, Saginaw Heritage 20 The Hawks (3-1) had earned much of the attention in the Saginaw Valley League over the first three weeks, but the Cardinals (3-1) solidified a spot as a top contender in the SVL South with Lapeer. Swartz Creek 26, Fenton 23 The Dragons (4-0) have done some impressive building the last three seasons and likely enjoyed this win a little more after splitting last year’s Flint Metro League Stripes title with the Tigers (2-2) because of a 41-27 defeat.

HEADLINER Bloomfield Hills Brother Rice 43, Warren De La Salle Collegiate 42 This might be the stunner of the 11-player season so far, as De La Salle (3-1) had won 16 straight games and 21 of its last 22. But looking back, it must be noted that Brother Rice (2-2) had given the Pilots some of their toughest games over the last five seasons, falling last year only 21-15 and winning the 2019 and 2020 matchups. The Detroit Catholic League Central is so loaded, it’s tough to forecast what happens from here. But this will certainly be a difference-maker in some way. Click for more from the Oakland Press.

Here's the highlights of the Brother Rice at De La Salle football game that aired on Football Fridays Overtime powered by STATE CHAMPS! on @BallySportsDET

Watch list Detroit Martin Luther King 28, Detroit Cass Tech 23 Any other week this would be the premier game in the Detroit area and beyond, as this time King (2-1) held off a late comeback by Cass Tech (1-3) after the Crusaders took a 28-10 lead.

On the move West Bloomfield 35, Clarkston 27 These Oakland Activities Association Red rivals can’t help but combine for must-see football, with this the third-straight meeting and fifth game over their last six together decided by eight or fewer points. West Bloomfield is up to 4-0, and Clarkston is 2-2 with two one-score defeats. Walled Lake Western 51, South Lyon East 23 The Warriors (4-0) are halfway through the Lakes Valley Conference schedule alone in first and a win better than multiple other contenders – including South Lyon East (3-1) in a competitive race. Gibraltar Carlson 27, Trenton 6 The Marauders (4-0) have downed two of the other three top contenders in the Downriver League in successive weeks, the time handing Trenton (3-1) its lone defeat.

HEADLINER East Lansing 36, DeWitt 30 The Trojans (4-0) scored the only points of the four quarter – in fact, of the entire second half – to earn valuable position in the Capital Area Activities Conference Blue and potentially put DeWitt’s 15-season league title streak in jeopardy. Jace Clarizio made the big plays on both sides of the ball late as East Lansing avenged last season’s 49-14 loss to the Panthers (2-2). Click for more from the Lansing State Journal.

Watch list Mason 37, Williamston 29 While most eyes have been on East Lansing and DeWitt, Mason (4-0) might be the best CAAC team few are talking about. Williamston (3-1) joined Holt from two weeks ago among league title contenders to suffer their first loss this season to the Bulldogs.

On the move Belding 46, Grandville Calvin Christian 26 Both entered undefeated, and Belding (4-0) has yet to play a single-digit game this fall. Grand Ledge 37, Lansing Waverly 20 The Comets (3-1) came back from a Week 3 loss to rival Holt to hand Waverly (3-1) its lone defeat. Mount Pleasant 27, Traverse City Central 21 The SVL is even stronger this season with the additions of TC Central and TC West, and the Oilers (4-0) held off the Trojans (1-3) in their league debut after breaking a halftime tie with all 13 points of the third quarter.

HEADLINER Traverse City St. Francis 49, Kingsley 12 The Gladiators (4-0) ran their winning streak over Kingsley to two straight and in doing so may have gained the eventual edge to repeat as Northern Michigan Football League Legends champion. St. Francis scored more than 42 points for the fourth time in four games this fall, but maybe more impressive is a defense that held the Stags (2-2) to their fewest points since 2018. Click for more from the Traverse City Record-Eagle.

Watch list Charlevoix 48, Elk Rapids 0 The Rayders (4-0) have put together great starts all of the last four seasons, but nothing like this. They’re up to three straight shutouts, winning by a combined score of 165-0, and handed Elk Rapids (3-1) its only defeat.

On the move Gaylord 27, Petoskey 12 After a slight stumble two weeks ago against Marquette, Gaylord (3-1) got a third win to guarantee its best season since 2018. McBain 55, Houghton Lake 19 After opening with defeats to Kingsley and Beal City, McBain (2-2) has evened its record with more tough Highland Conference competition on the way. Cadillac 46, Alpena 14 The Vikings’ two defeats came against much larger opponents from the Saginaw Valley League, but they are likely the strongest contenders now in the Traverse City-less Big North Conference.

HEADLINER Carleton Airport 41, Grosse Ile 34 Both of these teams are in the midst of bounce-back campaigns, and Carleton Airport (4-0) has now equaled its win totals of both of the last two seasons. Handing Grosse Ile (3-1) its first defeat also leaves the Jets and Week 7 opponent Riverview as the last undefeated teams in the Huron League. Click for more from the Monroe News.

Watch list Union City 18, Reading 16 The Chargers (3-1) ran their winning streak over Reading (3-1) to two straight and have put themselves on firm footing tied with this week’s opponent Homer atop the Big 8 Conference.

On the move Addison 42, Michigan Center 40 The Panthers (3-1) have defeated Michigan Center (1-3) the last two seasons by a combined three points. Jackson Lumen Christi 19, Parma Western 14 The Titans’ three losses have been so strong that adding in this win over Western (2-2) sends Lumen up to No. 24 in Division 7. Tecumseh 48, Adrian 26 They have two more to win first, but this one puts Tecumseh (4-0) much closer to playing Chelsea for the Southeastern Conference White title in Week 7.

HEADLINER Edwardsburg 10, Vicksburg 7 The scores have been a little closer than usual during the early going in the Wolverine Conference. But Edwardsburg is still the team to chase. The Eddies (3-1) remain undefeated in league play thanks to Carter Houseworth’s 42-yard field goal with two seconds to play that sent Vicksburg to 2-2. Click for more from the Niles Daily Star.

Watch list St. Joseph 35, Battle Creek Lakeview 14 The Bears (3-1) have set themselves up for a Southwestern Michigan Athletic Conference showdown this week against reigning champ Portage Central, which defeated St. Joseph 36-30 a year ago.

On the move Paw Paw 56, Sturgis 42 The Redwolves (3-1) have upped their offensive production each of the last three weeks, this time to outlast a Sturgis team that has scored a combined 97 points over its last two games. Constantine 56, Schoolcraft 22 This rivalry restored went Constantine’s way in a big way as the Falcons (3-1) defeated Schoolcraft (3-1) for the first time since the 2015 playoffs. Battle Creek Central 42, Stevensville Lakeshore 35 After falling just short against Byron Center in the season opener, Central has won three straight to guarantee equaling its best overall record since 2018.

HEADLINER Gladstone 40, St. Ignace 0 Make Gladstone the Upper Peninsula team that should be getting the most attention statewide. The Braves (4-0) are up to No. 5 in Division 6 playoff points after handing St. Ignace (3-1) its lone defeat, and they have yet to play a single-digit game despite facing four opponents which are all 2-2 or better. Click for more from RRN Sports.

Watch list Houghton 34, Bark River-Harris 16 We’ve had an eye on Houghton all season, and it remains justified as the Gremlins (3-1) bounced back from last week’s loss to Iron Mountain to hand the Broncos (3-1) their lone defeat.

On the move Menominee 48, Escanaba 28 The Maroons (2-2) got back to .500 and back to scoring 40 points after being held to just six both of the last two weeks. Ishpeming Westwood 14, Ishpeming 12 (OT) The Patriots (1-3) have had a tough start with two losses by three points or fewer, but getting one of those results back against the rival Hematites (2-2) could provide a jumpstart. Kingsford 28, Marquette 14 The Flivvers (2-2) broke a two-game losing streak as they wait for a possible Gladstone slip-up in the Great Northern Conference.

HEADLINER Byron Center 48, Lowell 35 Put in context, Byron Center’s 2-2 start might be the best 2-2 start in Michigan. The Bulldogs handed Lowell (3-1) its lone loss, and their Week 1 win over Battle Creek Central remains the Bearcats’ only defeat. Byron Center’s losses came to still-unbeaten Grandville and Grand Rapids Forest Hills Central. This time, the Bulldogs got up 28-7 by halftime and never looked back. Click for more from Michigan Sports Radio.

On the move Muskegon Oakridge 30, Ludington 18 This combined with Whitehall’s big win over Montague has made the Eagles and Vikings remaining favorites in the West Michigan Conference Lakes. Kent City 67, White Cloud 26 The Eagles (4-0) are one more win from matching their season totals of the last two. Ada Forest Hills Eastern 35, Wayland 16 The Hawks are 4-0 for the first time since 2015 and a win from equaling last year’s success, while Wayland (2-2) already has guaranteed its best finish since 2018.

HEADLINER Colon 40, Adrian Lenawee Christian 24 Not only had Lenawee Christian never lost an 8-player game, but the Cougars had played only one single-digit game during that 27-win streak – in Week 2 this season against Toledo Christian. Colon has been nearly as impressive since switching to 8-player in 2018 and moved to 45-6 over those five seasons with this victory. Click for more from the Sturgis Journal.

Watch list Rudyard 34, Pickford 6 This was the second-straight win for Rudyard (2-2) over Pickford, and whereas last year’s denied Pickford (3-1) a championship share in the Great Lakes Eight Conference East, this one could also shake up the league race.

On the move Norway 30, Crystal Falls Forest Park 28 Adding this to the Lake Linden-Hubbell win two weeks ago, Norway has surged into contention in the GLEC West and sits as the most likely challenger to North Central. Powers North Central 67, Ontonagon 0 Speaking of, this was the performance that gave the Jets that 27th-straight victory – their second shutout this fall (one win was a forfeit) as they’ve given up only three points over the first month. Breckenridge 44, Portland St. Patrick 20 As anticipated, the Huskies (3-1) are adjusting well to 8-player in their first season, with this win over the annually-contending Shamrocks (3-1) the most impressive so far.

PHOTO: East Lansing's Kanye Jackson (3) works to break away from a DeWitt defender during the Trojans' Week 4 victory. (Click for more from High School Sports Scene.)