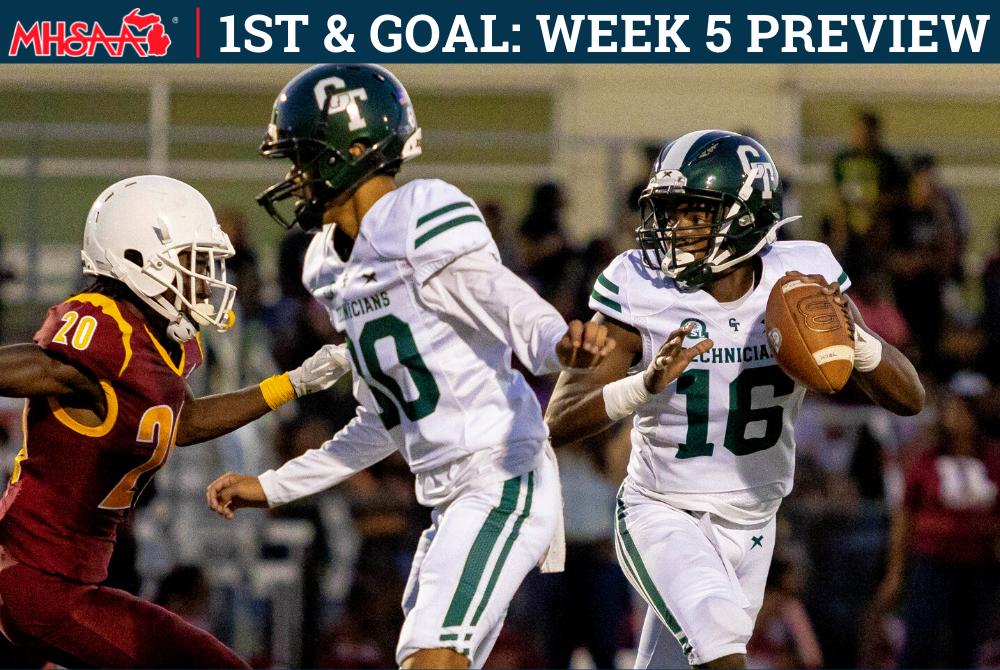 This weekend is the midpoint of this regular season, and stands to be a turning point for several teams this season.

Eight games will match teams undefeated so far this fall. A number of others will pit league title contenders against each other, with the Port Huron and Flint areas, Detroit Catholic League, Macomb County and rural Greater Lansing enjoying some of their best annual rivalry games over the next two days.

This has become a league matchup with statewide appeal over the last few seasons. Frankenmuth has won the last three meetings, last season’s deciding the Tri-Valley Conference 10 title. But both went on to reach MHSAA Semifinals, Freeland in Division 4 and the Eagles in Division 5. Frankenmuth has handed lone losses this fall to Goodrich and Birch Run and given up only 30 points total. Freeland’s defense literally has been one better, giving up only 29 points so far.

This is the midpoint as well in the Macomb Area Conference Red schedule – and these are the two contenders left without a defeat. They are frequently at the top, although last season they tied for third in the league standings. Dakota has won the last three meetings (starting with the 2019 playoffs), and both have done the work to make this arguably the best matchup in Week 5. Chippewa Valley’s season-opening win over Detroit Catholic Central keeps looking better and better. Same scenario for the Cougars, who defeated Bloomfield Hills Brother Rice in Week 1 and have given up 17 points over its four victories.

The Warriors have looked like a Saginaw Valley League North contender especially the last two weeks with 20-plus point wins over Traverse City West and Midland Dow, and was on the cusp last season while losing to Dow by a point and Mount Pleasant 31-16. Western can become the team to chase this weekend by avenging that defeat to the Oilers, who are coming off one-score wins over Cadillac and Traverse City Central. Mount Pleasant has won the last seven games in this series.

With the Big North Conference now at four teams for football, and these two coming off wins in their league openers, this matchup will decide a share of the BNC championship. Gaylord bounced back nicely from its Week 3 loss to Marquette to defeat Petoskey last week, while Cadillac has impressive one-score losses to Midland and Mount Pleasant. The Vikings won last year’s meeting with Gaylord 22-0, their fourth-straight victory in the series.

Jackson Northwest is on the rise as its third win last week guaranteed the Mounties their best finish since 2013 and equaled their number of victories the last three seasons combined. And suddenly, Northwest could figure into the Interstate 8 Athletic Conference race with four of the other top six teams in the standings coming up over the next five weeks. Western certainly can’t be overlooked among them; its losses were by seven points to Detroit Country Day and five to Jackson Lumen Christi.

Edwardsburg’s Wolverine Conference winning streak lives at 35, but not without two of its most significant challenges over the last six seasons. Three Rivers pushed the Eddies to within eight points in Week 2, and Edwardsburg escaped with a three-point win over Vicksburg last week thanks to a last-second field goal. Plainwell has made the playoffs nine of the last 10 seasons (plus 2020, when all teams qualified) and would be a candidate to challenge the Eddies too – although Edwardsburg won last year’s matchup 49-0.

Iron Mountain has won all six recent meetings, including one in the playoffs. But Bark River-Harris gave the Mountaineers their best matchup of those six last season, falling only 28-22. They play in different divisions of the Western Peninsula Athletic Conference, and both are championship contenders in their respective divisions – plus Bark River-Harris is ranked No. 6 and Iron Mountain No. 10 in Division 8 by the Michigan High School Football Coaches Association.

This, along with Rockford/East Kentwood matchup below, will bring the number of teams leading the Ottawa-Kent Conference Red from four to two by Friday night’s end. The intrigue here is both are undefeated overall – plus Grandville sees Rockford next week, and Caledonia sees East Kentwood. Grandville owns a 4-2 edge in this series since Caledonia moved to the Red in 2016, but Caledonia has won two of the last three including 24-14 last fall. The Fighting Scots are stoppers; they’ve given up 28 points total so far. But opening wins over Grand Blanc and Byron Center put Grandville into the spotlight quickly this season.

Brown City is playing 8-player this fall for the first time and showed the fast start isn’t beginners’ luck again last week with a 58-40 win over perennial Finals contender Suttons Bay. Defeating Martin would be a similar if not more substantial accomplishment. The Clippers haven’t given up a point since Week 2 and moved up to No. 1 in Division 1 this week, while Brown City is No. 5.

PHOTO Detroit Cass Tech quarterback Leeshaun Mumpfield drops back to pass against Detroit Renaissance during a Week 3 win. (Photo by Chardonne’ U of Olivia B. Photography.)