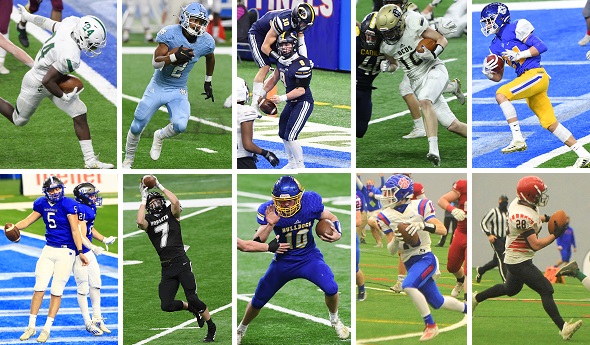 With absolute certainty, we can say this recently-concluded football season was like no other during the nearly 100-year history of the MHSAA.

But after just more than five months, and amid COVID-19, it was played to completion – with 8-Player Finals on Jan. 16 at Brighton’s Legacy Center and 11-Player Finals Jan. 22-23 at Ford Field in Detroit.

Second Half again covered all 10 championship games, with quick recaps and links (click on the game scores) to those stories below followed by notations of performances entered into the MHSAA Finals record book and a report on some of the biggest and best stories to emerge from the championship weekends. See also below highlights from State Champs Sports Network.

Led by Donovan Edwards’ 257 yards and three touchdowns rushing, West Bloomfield won its first Finals championship with a shutout of the 2019 champion Cardinals. Much more on Edwards below, but the Lakers’ effort on the other side of the ball can’t be overlooked – the shutout was the team’s sixth of the season.

After winning its first championship in 2019, Mona Shores earned another in its encore led again by quarterback Brady Rose. Rose had started last season’s Final in place of an injured all-stater, but he was hardly unknown this time – and still ran for 154 yards and two touchdowns, including a 65-yard sprint during the fourth quarter that helped wrap things up for the Sailors.

DeWitt finished off the longest football season in MHSAA history with its first championship, earning it against a River Rouge team looking to repeat after winning its first title in 2019. Quarterback play was on display in this finale as well, with DeWitt’s Tyler Holtz and Rouge’s Mareyohn Hrabowski putting up big numbers.

The Cougars added their fourth championship in five seasons, this one their first in Division 5 after winning previously in Division 4. GRCC quarterback Joey Silveri accounted for six touchdowns in a Final for the second-straight season as his team built a big early lead against the first-time finalist Eagles. 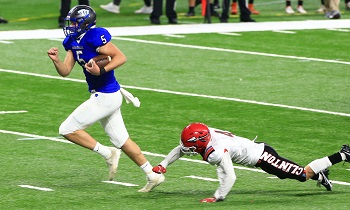 Strong quarterback play and a father-son connection both came into play in Division 6 as well as senior Drew Collins led dad Pat’s team to its first Finals championship since 2009. What Drew said after told the story of the entire season restart: “Everybody on this football team, coaches, players, trainers – everybody on this football team loves high school football. I love high school football. I love these coaches. I love my friends on the team. I love everybody on the team. I love the community. It’s bittersweet when you win a state championship when you’re a senior because it’s all over.”

The Hornets’ Julius Garza put up one of the most impressive individual performances of the weekend, scoring three ways for a total of four touchdowns. New Lothrop got up early and then held off a St. Francis comeback to claim its second championship in three seasons.

Centreville’s shutdown defense put together one more awe-inspiring performance to help the Bulldogs’ to their first championship. Centreville ran its state-best points-allowed-per-game average to 2.9 with its seventh shutout in 10 games played.

The Cougars put an exclamation point on a dominating first season of 8-player football with their first Finals championship in the sport, either format. Lenawee Christian not only performed well offensively but held Suttons Bay to 52 yards total. The Norsemen finished Division 1 runners-up for the second-straight season.

The Jets claimed their third championship in what was the highest-scoring 8-player championship game in the decade-long MHSAA Finals history of this format. More on that below, and also on North Central quarterback Luke Gorzinski and St. Patrick quarterback Connor Cross, who were among those to put up giant numbers. The Jets also feature a father/son combo, with Luke the son of head coach Leo Gorzinski.

As one might imagine, the highest-scoring game in 8-Player Finals history was filled with record book accomplishments. North Central’s 70 points were the 8-Player Finals record for one team, and the combined 118 points were 19 more than the previous record set in Peck’s 67-32 win over Rapid River in 2013. The teams’ 933 combined total yards ranks third on that 8-Player Finals list, while North Central’s 22 first downs was tied for second and St. Patrick’s 21 first downs ranked fourth. Neither team punted, making for another first in 8-player championship games. The game was not only the highest-scoring 8-Player Final, but the third-highest scoring 8-player game in MHSAA history (including regular season), missing tying that record by only six points. 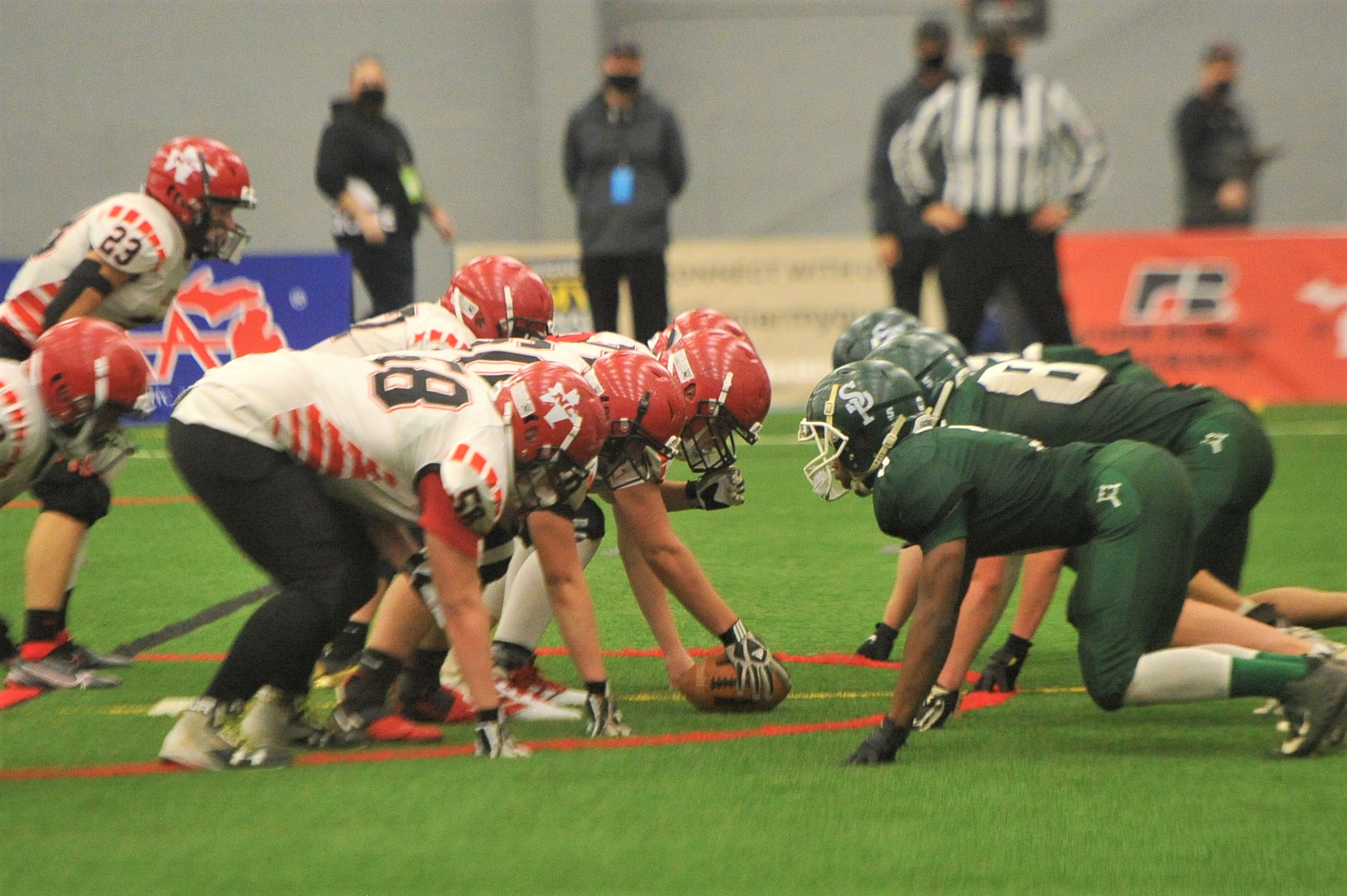 Also as noted above, all-state quarterback play was on display for both 8-player Division 2 finalists. North Central QB Luke Gorzinski totaled the second-most rushing yards, 299, in an 8-Player Final, and with 156 yards passing set the total offense record at 455. St. Patrick QB Connor Cross, with 397 total yards, is fourth on that list. Cross’s 374 passing yards were second-most in an 8-Player Final, as were his six passing touchdowns, and he earned the first listings with 25 completions and 38 pass attempts. Shamrocks receiver Shane Cook, meanwhile, set the record with 13 receptions for the second-most receiving yardage, 179. North Central as a team finished with the third-most rushing yards, 373 on 37 attempts, and third-most rushing touchdowns with six. St. Patrick as a team was second for team passing yards and touchdowns.

The 8-Player Division 1 Final made the record book as well, in two categories. Lenawee Christian as a team defense posted the lowest number of yards allowed, just 52. And Cougars quarterback Landon Gallant also made the total offense list with 326 yards – 59 rushing and 267 passing.

West Bloomfield’s Jake Ward made all three kicking lists for 11-player, tying for third with two field goals in a game, ranking fourth for longest with a 45-yarder, and making the extra points list with five in the Division 1 Final. Grand Rapids Catholic Central’s Jack Barlow tied for fourth on that extra points list with six in the Division 5 game.

The Lakers’ Donovan Edwards was another of the stars of the weekend, with his 257 yards rushing ranking eighth all-time for an 11-Player Final – and while coming on just 14 attempts in Division 1.

Montague’s Drew Collins made the 11-player passing yards list with 244, coming on 15 completions in the Division 6 game. Three of those went for touchdowns to teammate Samuel Smith, who tied the record held by nine others for touchdown catches in an 11-Player Final.

While quarterbacks starred in many cases, the run game was hardly left behind. In addition to Edwards’ performance for West Bloomfield, Clinton had the fifth-most rushing attempts in 11-player championship game history with 65, for 358 yards. Clinton also tied the record with just one pass attempt, with West Bloomfield tying for fifth on that list with two throws. Those two and Cadillac all tied the 11-Player Finals record by recording zero completions – they brought that all-time list to 21 teams that didn’t complete a pass in an 11-player title game. 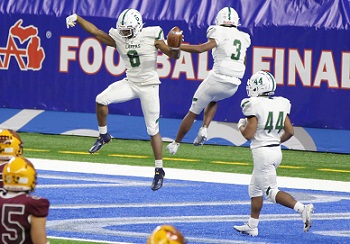 The Division 6 Clinton/Montague matchup also finished as one of the least-penalized in MHSAA 11-Player Finals history. The two teams combined for just 10 penalty yards, coming on one Clinton penalty. Montague was not penalized in the game.

Stories Behind the Scores

The Longest Season: Due to COVID-19, this season started on time, stopped, restarted, stopped again in mid-November, and restarted one more time with rapid testing the final week of December with playoffs ending over two weekends in mid-January. There are many reasons to want to forget the last year, and many much sadder circumstances. But the perseverance of all Fall athletes and families, coaches, administrators and support staff; along with the testing program provided by the Michigan Department of Health and Human Services, made for a memorable story that surely will be recalled for years to come.

Edwards’ excellent ending: Edwards was slated to join University of Michigan’s football program as an early enrollee in January. But first, he wanted to finish his high school season, and career, with the Lakers. He led them to their first championship, with one of the top rushing performances in Finals history, and as arguably the biggest headliner from the weekend at Ford Field – likely gaining a few more fans along the way as well.

Many ways to win: As noted above, defense still works – four of 10 Finals were shutouts, and Centreville’s season-long performance was incredible. Also noted above, champions won both running and passing. But a final fun note on offense – seven of 10 champions this season scored 40 or more points in their championship games. That’s compared to two in 2019, five in 2018 and five in 2017.