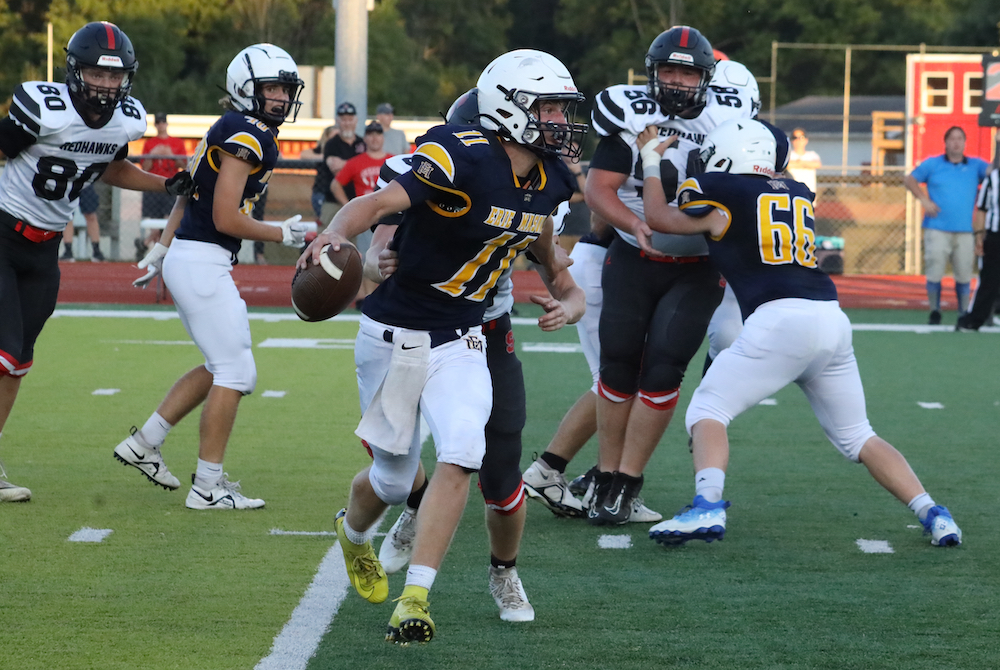 ERIE – Vaughn Brown never worried about replacing a legend. He just wanted to be the Erie Mason starting quarterback.

After a solid rookie season last year, Brown has started out his junior year with a bang. In the Eagles’ season opener Friday, Brown threw eight touchdown passes during the first half, tying a state record, and his right arm has Erie Mason fans thinking a third-straight playoff season is possible.

“It was one of those nights,” Brown said. “Everything was going well. It kept working. It didn’t matter what we did, they couldn’t stop it.”

“Watching film, we knew what their corners and safeties would do,” Brown said. “On the second play of the game, Korbin Herrera went deep and just ran right past a guy. I dropped back, and I knew right then it was going to be a good day. I threw it, and he ran under it and scored. It was a great play.”

Getting into the Erie Mason passing record book is no easy feat. That’s because the quarterback who Brown replaced last year was Noah Beaudrie, now playing at Mount Union College.

Beaudrie was a four-year quarterback at Erie Mason and put up some stunning numbers. As a senior in 2020, Beaudrie accumulated more than 1,000 yards rushing and passing. Over his four seasons, he completed 371-of-647 passes for 5,747 yards and 56 touchdowns. He ran for another 4,503 yards and 59 touchdowns. 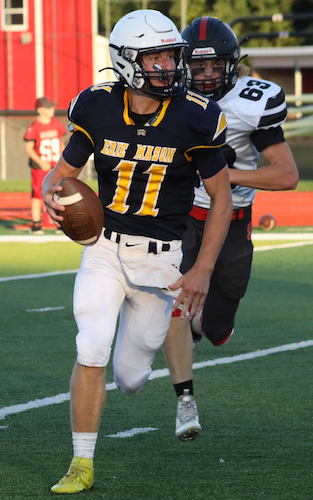 He earned all-state honors and had multiple college offers before landing at Mount Union, one of the most storied small-college football programs in the nation.

As a sophomore, Brown had the unenviable task of taking over for Beaudrie. He said he never felt like he had to replace Beaudrie, just help his team win.

“I knew Noah,” Brown said. “He was super good to me and helped me along the way. I just came into the season just wanting to help last year’s seniors win games. I didn’t care about stats. I never really have cared about that. The stats never crossed my mind.”

Brown grew up just across the state line in Toledo, Ohio, and moved to Erie Mason before he was in the seventh grade. He was part of the Eagles program when Beaudrie was setting record after record.

“He was a good mentor. He helped me along the way. Noah was a great athlete and an amazing player in general,” Brown said.

“Me and him play a different type of game. He’s more athletic than me. He liked to run. I’d rather stay in the pocket and throw the ball 100 times a game than run.”

Erie Mason head coach Steven Bower said Brown has grown into the quarterback position and as a team leader. During the summer Brown never missed a chance to work out, lift weights or get in time with his receivers.

“He’s the poster child for our program. He does everything,” Bowers said.

“I hate missing stuff. I enjoy being there and being around the guys,” Brown said.

During the offseason, Bowers had some of his players go through leadership training. Bowers called it “captain’s classes.” Brown was one of the players to go through the training.

“The kids have done a good job of listening to him and following him,' Bowers said. “He sets the standard for everyone.”

Brown was a four-sport athlete last year, playing basketball in the winter and pulling double duty in the spring by playing baseball and running track.

“Vaughn is a tremendous athlete and leader,” Erie Mason basketball coach Kevin Skaggs said. “In a summer game he had to defend a 6-foot-5 post player in one scrimmage. He outworked, outran, and out rebounded him. He’s a tough, tough kid.”

“I’m one of those guys who just goes out there, plays defense and rebounds and helps the team win,” Brown said. “I might ride the bench, but I’ll push people in practice and do the best I can.”

Brown said he gets his work ethic from his parents, Allen and Paige Brown, both Ohio natives. His dad was an all-state defensive lineman in high school.

“My parents have always instilled in me hard work. They’ve always told me I had to earn everything,” Vaughn Brown said.

“My mom and dad have driven me to so much stuff over the years. I can’t count how many times they gave me rides to sports. My mom would get off work early, and my dad took me places. I’m very grateful for that.”

Brown said he had never heard of Erie Mason before his parents bought a home in the community. Now he lives right across the street from the school.

Brown finished Friday’s game with 13 completions on 19 attempts for 358 yards. He completed passes to six receivers.

“We have five or six guys who are great receivers,” he said. “Friday gave us a lot of confidence. All our guys just played so well. The line blocked great, and the guys made some great catches. I’m excited about what’s to come.”