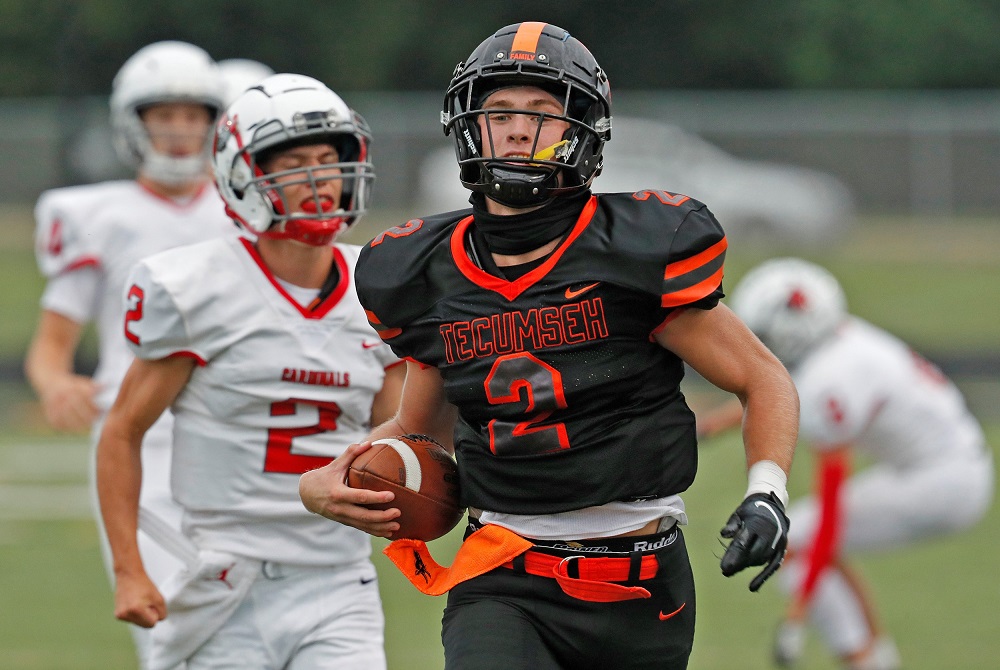 The Tecumseh coaching staff isn’t rushing anything yet. They are hoping to have Burns at the helm of the offense for the rest of the regular season and hopefully into the postseason. Tecumseh is 3-0 and off to its best start since 2012, playing with a stacked deck on offense, with numerous weapons but perhaps none more important than the multi-sport athlete Burns.

He’s the glue that bonds the Tecumseh line with the backs and receivers and has the team scoring about 47 points a game.

“Jake has really matured,” Dolson said. “He doesn’t like the spotlight. You could see last year he really started coming into his own. This year he is playing at such a high level. It’s exciting watching him grow.”

Burns, 17, is a senior and Tecumseh through-and-through. His grandfather and his grandfather’s family played sports at Tecumseh. His dad Brian played at Tecumseh. Now, Jake’s turn to wear No. 2 – just like his dad – and represent the family on Friday nights under the lights.

“There’s been a long line of Burnses going through Tecumseh,” the senior QB said.

Jake Burns might be the best of them before he’s through.

“He is poised to take us on a playoff run,” Dolson said.

Under his leadership, Tecumseh is hoping to keep things rolling Friday against rival Adrian and make some noise in the Division 4 playoffs.

Burns has played a huge role in each of Tecumseh’s first three wins. 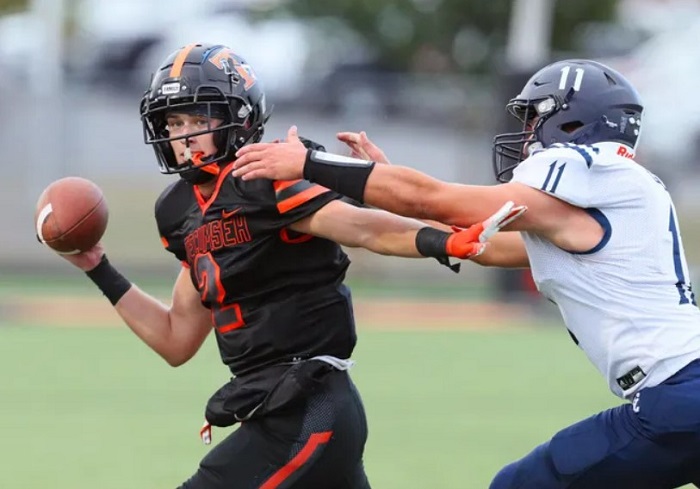 Against Michigan Center he threw for 132 yards and a touchdown and rushed for 79 yards and a score. In Week 2 against Richland Gull Lake, Burns threw four touchdown passes and had nearly 300 yards of total offense. In the Southeastern Conference White opener last week against Pinckney, he had 120 yards rushing and 116 yards passing. He scored on an 81-yard run.

Tecumseh went 4-5 last year, and Burns said that left a bad taste in the players’ mouths.

“We all want to win,” Burns said. “Last year didn’t fit our standards. We all knew we couldn’t settle. We got the younger kids involved in the weight room and active, and it’s really awesome to see it pay off.”

Tecumseh runs the spread offense that is directed by Romano, a Hall of Fame coach who guided Erie Mason to the Class C championship in 1987 and has coached at the high school and college levels for years. He returned to high school football a couple of seasons ago to become Dolson’s offensive coordinator. It’s been a perfect fit with he and Burns.

“I enjoy playing quarterback. I couldn’t be more thankful for Coach Romano,” Burns said. “He’s always looking out for me and helps me so much. It’s great to have a mentor like that.”

Romano and Dolson have put together a great offense in Tecumseh. Junior running back A.J. Bryan is a threat to score every time he touches the football, and receivers like Ryder Zajac, Gavin Chenevey and Jobe Benschoter have already proved their value to the team this season.

“Every play we run I have the ability to hand it off, keep it myself or throw it,” Burns said. “It’s just a matter of making the right read. We have weapons all over the field.

“Coach Romano spends a lot of time talking to me and watching film. He is always pulling tricks out of his bag.”

Dolson said Burns tries to stay out of the spotlight, but it’s tough for the standout to elude.

“He plays in the neighborhood with all of the little kids, throwing the ball around and stuff,” Dolson said. “He’s in leadership classes at the school and is like a 3.7 student. He goes out of his way to be nice to everyone. He hangs out with his offensive line. Nothing about him is fake, either. He’s genuine.”

Burns is an elite baseball player as well and hasn’t decided which sport he will play at the next level.

“Football is special,” he said, “but I love baseball, too. I love both sports. It’s going to be hard to decide.”

Adrian (2-1) travels to Tecumseh on Friday and is typically its biggest rival on the football field. A win puts Tecumseh in great position with key SEC White battles coming up with Chelsea and Jackson.

“The game always brings some sort of buzz and hype,” Burns said. “We just want to play the game and get the job done.”

Burns said this year’s team has a different feel than previous ones he’s played on. Everyone gets along and is working toward the same goals.

“I think the team leadership is different,” Burns said. “Everyone is friends. We all mesh really well. We enjoy ourselves at practice. We try and have fun. At the end of the day, it’s a game. We want to have fun with it. We believe in each other.”