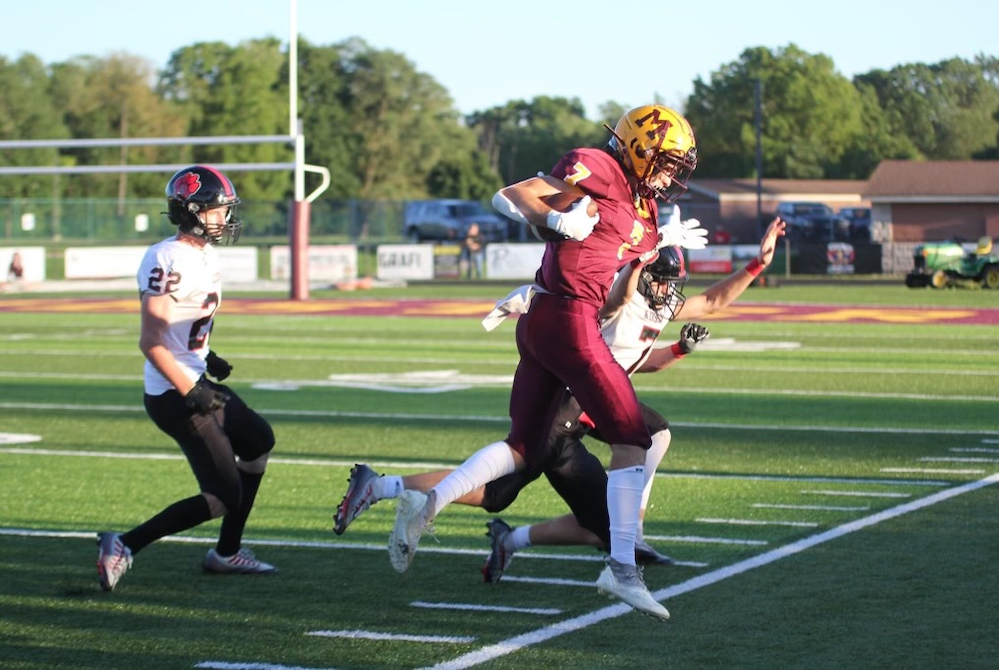 Manchester’s football team is going through a re-birth.

One of the team’s top players – senior Jaxon McGuigan – calls it a change in culture.

“This summer, when we were having workouts or lifting, we had 30 guys show up every time,” said McGuigan, the team’s leading receiver. “When I was younger, there were times we would have only 10 guys. If we had 10 guys there now, we knew something would be wrong.”

Manchester is one of the oldest prep football programs in the state. It also has been one of the most successful. From 2003-16, the Flying Dutchmen made the playoffs 13 of 14 seasons, including a streak of nine straight. Then, for a variety of reasons, the bottom fell out.

Head coach Ben Pack was brought in to make changes to the program. He’s delivered. Now in his third season, the Dutchmen have a signature win over three-time reigning league champion Addison and stand 4-1 midway through the season. They are firmly in the playoff hunt and are just a game behind league leader Napoleon, the only team to beat them this season. Even that was a close game until the end.

“Our numbers were so low when I got here,” Pack said. “We struggled. That first year, the COVID year, we could barely put together a scout team.

“When I got here, we had four guys returning from the previous year and six juniors who were on JV as sophomores,” Pack said. “Ten guys in the program. I had to do a lot of recruiting in the hallways. We had to get kids out for football.”

Pack is a veteran coach. He is a Jackson native who started his coaching career at Jackson High School while in college. He became the head coach at Parma Western in 1983 and headed home to Jackson after that. The Vikings put together a string of good teams, including the 1999 group that was Jackson’s first playoff qualifier.

Pack left Jackson in 2002 to become an administrator, but remained in football when he joined the Albion College staff. He returned to the high school ranks a couple of seasons ago at Parma Western as a volunteer assistant. Two seasons later he was named head coach at Manchester.

Pack has not only been recruiting in the Manchester hallways, but he’s also been busy implementing a strength program.

One of his players that first year was a freshman quarterback, Kannon Duffing, who made one start.

“He competed,” Pack said. “He was definitely a half-pint, but he played, and he did a nice job. He completed passes. He wasn’t ready to win, yet, but he grew from it and learned from the experience.”

“We don’t throw deep a lot,” Pack said. “But what we do throw, he’s very accurate. He gets the job done. He’s the unsung hero for us. He’s the catalyst. He is the key to the whole thing.”

“He is so good,” McGuigan said. “I know he’s going to put the ball right there. We have other good receivers, too, and he does a great job at getting us the ball. Our game plan is not to just get the ball to me.”

McGuigan is a former quarterback himself. He shifted to receiver early on in his career at Manchester and likes the move. He’s now a 6-foot-2, 170-pound college prospect. He’s a three-sport athlete with a 4.0 GPA.

Pack said McGuigan has great technique in the way he runs routes.

“Every successful team has a player or two that the other kids count on,” Pack said. “Jaxon has accepted that responsibility and is a role model for handling the pressure.”

Through five games, McGuigan has caught 37 passes for 554 yards and seven touchdowns. The biggest came with time running out against Addison and helped the Flying Dutchmen overcome a two-score deficit to defeat the Panthers. The Flying Dutchmen defense came up big in that game, too, when they put together a goal-line stand during the final moments to keep Addison out of the end zone.

“To be honest, that’s the type of game the last couple of years that we wouldn’t win,” McGuigan said. “To beat them just shows that everyone has buy-in now. It just shows how we’ve changed the culture here.”

Two weeks ago, Manchester bounced back from the Napoleon loss to win against East Jackson. McGuigan had one of his biggest games with eight catches for 106 yards and two touchdowns.

East Jackson coach Joe Niehaus said McGuigan is one of the most complete receivers he’s coached against.

“He runs great routes and catches virtually everything thrown to him,” Niehaus said. “On top of that, he is a threat to go the distance after the catch every single time.”

Manchester has conference games remaining against Michigan Center, Hanover-Horton, and Grass Lake. The Dutchmen are a top-10 team in Division 7 playoff points and are sitting nicely as they attempt to get back into the postseason.

“Ever since Coach Pack came here, it’s been drilled into us to trust the process,” McGuigan said. “We’re still far from where we could be as a team.”

PHOTO Manchester receiver Jaxon McGuigan holds on to the ball while Addison defenders take him out of bounds. (Photo by Mark Ball, courtesy of the Manchester football program.)