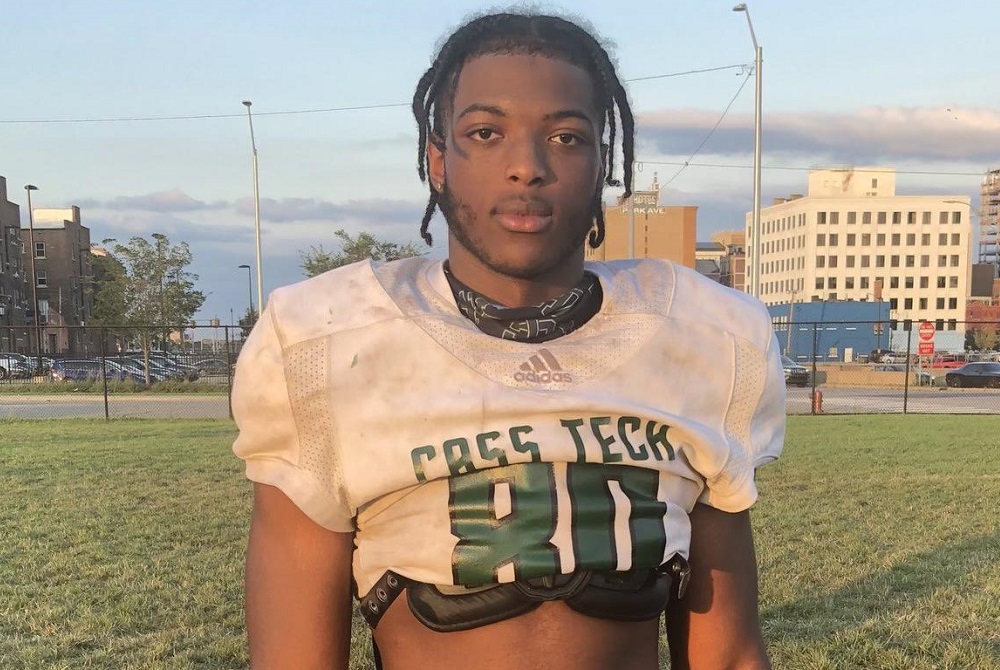 DETROIT – Monday will mark both an end and the beginning for Detroit Cass Tech senior Jalen Thompson.

On one hand, it will mark an end to everyone in the recruiting world wondering which college football program he’ll initially give a commitment, as he had targeted Monday as the decision date to pledge his services to one of the more than 30 Division I college programs who have offered him a scholarship.

But it also will be the beginning, because make no mistake about it: College coaches who lose out on Monday aren’t going to give up trying to woo the ultra-talented Thompson until national signing day in December.

It’s no wonder, because Thompson is one of the premier defensive line recruits in the Midwest.

Last season, Thompson finished with 10 sacks, 42 tackles and 14 tackles for loss despite being the constant focus of attention for blocking schemes of opposing offenses.

He has narrowed his college contenders down to, in alphabetical order, Cincinnati, Michigan State, Ohio State, Penn State and Pittsburgh, and chose Aug. 22 as the commitment date for two reasons.

Second, it’s the birthday of his late grandfather, and Thompson figured it was a good way to honor him.

“It was a day I felt comfortable with (committing,)” he said.

So Thompson will make one college program very happy Monday, then start preparing to make life miserable for opposing offenses during his senior season.

Of course, the big game that many have circled is Cass Tech’s annual tussle against Detroit Public School League rival Detroit Martin Luther King, which will take place on Sept. 16 at Cass Tech.

Many will turn out to see how much Thompson can pressure Martin Luther King quarterback and Oregon-pledge Dante Moore.

“Every time we go against them, my thing is to show them he’s not who they think he is and for him to get off the least amount of balls as possible,” Thompson said.

By no means is Thompson a late bloomer in football, given he has been playing in youth leagues since he was in elementary school.

However, he did not play for Cass Tech when he was a freshman because he decided to play youth football instead.

But after coming out for the varsity team his sophomore year, it certainly didn’t take long for Thompson to show he was special.

Cass Tech then-head coach Thomas Wilcher kept telling Thompson that his time was coming, and then proceeded to ask Thompson one question.

“Are you ready to blow up?” Thompson said Wilcher asked him.

Thompson sure did, and by the time his junior year was over, college coaches were salivating over his abilities.

This past offseason was spent touring some of the prominent programs in the country, including Ohio State, which offered him a scholarship in June after Thompson appeared at a camp there.

Going into his senior year, Thompson said polishing up mental aspects of the game is what he wants to focus on the most as he tries to lead Cass Tech to the Division 1 title.

“Really just fixing as many mental errors that I can and try and prepare for college as best of my ability,” he said. “Just fixing little things like techniques and definitely getting bigger. But mental things are most important right now.”

Cass Tech head coach Marvin Rushing, who is in his second year, said Thompson’s enhanced role as a leader will be vital this fall.

“He’s going to help lead our younger guys, which will be beneficial to us,” Rushing said. “We’re going to be a heavy mix of seniors and younger guys. That’s been pivotal. He’s been leading by example, working hard in the classroom and off of the field.”

It’s actually Thompson’s prowess in the classroom as a 3.8 student that has impressed Rushing more, especially while traveling the recruiting trail.

“It’s the way he carries himself off of the field,” Rushing said. “He is studying engineering here and plans on studying engineering in college. He’s a very accomplished student. The thing that stood out to me most in the offseason is that we had coaches come in here and he was really interested in what the Ivy League schools had to say.”

It should be a fun fall for everyone both and on and off the field to watch Thompson, who is ready to tell the world where he plans to play football and attend college Monday.

But he’s simply too talented for his recruiting to completely stop until December.

“Coaches now are texting me,” he said.

Keith Dunlap has served in Detroit-area sports media for more than two decades, including as a sportswriter at the Oakland Press from 2001-16 primarily covering high school sports but also college and professional teams. His bylines also have appeared in USA Today, the Washington Post, the Detroit Free Press, the Houston Chronicle and the Boston Globe. He served as the administrator for the Oakland Activities Association’s website from 2017-2020.