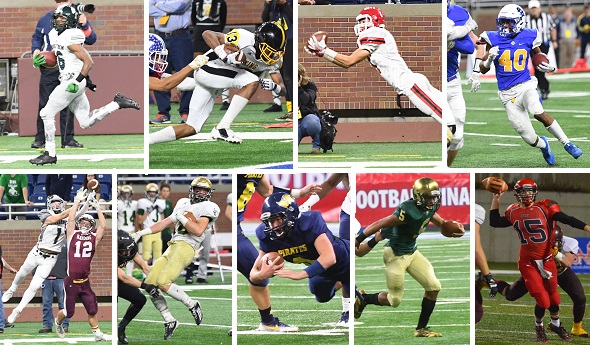 This season’s MHSAA Football Finals certainly had a familiar look. Five of 2015’s nine champions won again, and the season finished Saturday with only one winner claiming a title for the first time.

But while most finalists were regulars this time, players and coaches change even as teams stay the same. And this weekend, combined with the 8-player Final the Friday before, saw the ends of some eras and the likely beginnings of a few more.

Second Half once again covered all nine championship games, with quick recaps and links to those stories below followed by notations of performances entered into the MHSAA record book and a report on some of the biggest and best stories to emerge from the 2016 Finals.

In a meeting of the two top-ranked teams at the end of the regular season, the No. 1 Technicians finished a perfect run by downing the No. 2 Shamrocks in a rematch of the 2011 and 2012 Finals. Cass Tech had finished runner-up in 2015, falling to Romeo in the championship game. Click to read more.

There’s more below on the significance of King’s shutout, which included more points scored by the Crusaders’ defense than offense. The championship was the second straight and third overall for King, which entered this season on a heartbreaking note after coach Dale Harvel died suddenly in July. Click to read more.

The most memorable play of the weekend at Ford Field had to be Ky’ren Cunningham’s 18-yard touchdown catch between a pair of Muskegon defenders with four seconds to play. His grab gave the Eaglets their final one-point lead and third straight Division 3 championship. Click to read more.

A defensive stalemate for most of the first three quarters got pretty exciting during the fourth, and Grand Rapids Catholic Central claimed its first championship since 2010 despite earning only one first down – on what turned out to be the game-winning play. Click to read more.

Grand Rapids West Catholic became the second team of the weekend to win a fourth-straight MHSAA championship, and in the process beat Menominee in the playoffs for the fourth straight season as well. Quarterback Gaetano Vallone put up a performance that has him all over the MHSAA record book. Click to read more.

Frequent contender Lumen Christi earned its first championship since 2009, riding the running of Bo Bell (and at the goal line fullback Kyle Minder) against the passing of Glen Lake’s Cade Peterson. The Titans had started this season 1-2. Click to read more.

The second-leading rusher in MHSAA history, Jared Smith, ran for only 48 yards. But the Pirates took advantage of the attention he drew, with a number of contributors picking up the load as P-W won its first championship. Click to read more.

The Crusaders kicked off the 11-player Finals weekend by claiming their fourth straight championship in Division 8, paced by freshman quarterback Cameron Martinez. Whiteford, making its first Finals appearance, trailed only 7-6 at halftime before MCC scored 28 straight during the second half. Click to read more.

The Jets turned in another dominating performance, this time against previously-undefeated Deckerville. Amid at times a sideways rainstorm, both teams found success running the ball – but especially during the first half, North Central quarterback Jason Whitens simply couldn’t be tackled. Click to read more.

Detroit Catholic Central, with its fourth Division 1 Finals appearance this decade, moved into a first-place tie with 17 MHSAA Finals appearances since the start of the tournament in 1975. The Shamrocks share the top spot with Farmington Hills Harrison. DCC has won 10 titles, sixth-most in MHSAA history.

The record for longest Finals field goal was broken twice Saturday. Grand Rapids West Catholic’s Liam Putz drilled a 47-yarder in the Division 5 Final, and held the record for about three hours until Orchard Lake St. Mary’s Ben Fee nailed a 49-yarder in Division 3. Fee also tied the record with most field goals in a game, adding kicks of 32 and 35 yards. 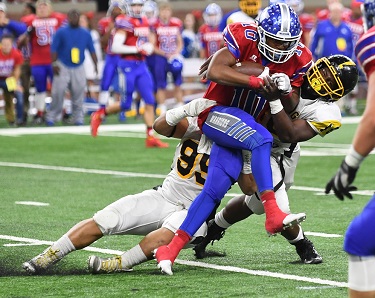 Jackson Lumen Christi’s Bo Bell easily was the biggest rusher of the weekend, joining the MHSAA list for yards on the ground with 238 on 40 carries in Division 5. As a team, Lumen Christi ran 65 times, which tied for third-most in a Final.

Gaetano Vallone connected with Brett Meyers for a 91-yard pass for West Catholic in the Division 5 Final, the fourth-longest passing play in Finals history and the Falcons’ first touchdown of the game. Vallone finished with 311 yards on 13 of 20 passing, good for the fifth-most passing yards in a Final. He also became one of 10 passers to throw for four touchdowns, and his 394 total yards (including 83 rushing) rank sixth. With teammates Dominic Stornant (six yards) and David Fox (34) also completing one pass apiece, West Catholic threw for 351 yards – third most by one team.

Maple City Glen Lake quarterback Cade Peterson also made the passing yards list, throwing for 254 on 15-of-20 passing in Division 5.

Cass Tech quarterback Rodney Hall capped his high school career by tying the MHSAA Finals record for passing touchdowns in a game, connecting for five in the Technicians’ win over DCC. As a team, Cass Tech tied for the sixth-most points in a Final with 49 in the 49-20 win and also became the 23rd team to not punt in an MHSAA Final.

Yellow flags flew at a minimum over the two days of the 11-player Finals, and especially in the Division 8 game; Muskegon Catholic Central (no penalties) and Ottawa Lake Whiteford (one penalty- five yards) combined for the second-fewest penalty yards in a championship game.

Powers North Central quarterback Jason Whitens left his name all over the 8-Player Finals record book. He set records with 352 rushing yards, six rushing touchdowns, tied the record with six total touchdowns, and was second with 40 points scored (he had two two-point conversions as well) and 452 total yards.

As a team, the Jets put up 58 points – tied with their 2015 team for third-most in an 8-Player Final – and combined with Deckerville (22) for 80 points, which also ranks third. Powers North Central also set team records with 469 rushing yards and seven rushing touchdowns, and the two teams set an 8-Player Finals record with 971 total yards between them with North Central’s 569 the fourth-most by one team. Deckerville also made the single-game rushing list with 330 yards.

Stories behind the scores

Public School League pride: For the first time, multiple Detroit PSL teams left Ford Field as MHSAA champions. Cass Tech and King – which had met twice during the regular season, including in the PSL Final – both won titles. King had won Division 2 last season, but Cass Tech fell in the Division 1 Final. 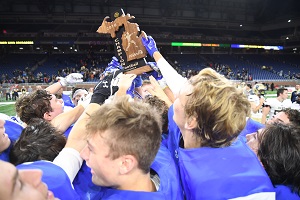 First – and last – first down: The Division 4 Final between Grand Rapids Catholic Central and Detroit Country Day included a lot of defense – and a few of the most statistical curiosities to be found in recent Finals history. The teams combined to rush 69 times – but each ended up with only eight rushing yards. GRCC had an incredible 11 sacks – and yet, also won the game with only one first down, on Michael Brown’s 44-yard receiving touchdown that gave the Cougars their final lead early in the fourth quarter.

Impressive zero: Speaking of defense, King’s shutout of Walled Lake Western was the third total by any team in the Finals over the last three years – but first ever in either Division 1 or Division 2 (the division format began in 1999). It was also the first shutout in a Final of one of the two divisions made up of the state’s largest schools since Detroit Catholic Central shut out Holt 24-0 in 1995 in Class AA.

Impressive zero, part II: With its second straight perfect season, Powers North Central remains undefeated in two years of 8-player football. The Jets are 26-0 since making the switch before the start of the 2015 season, and in that time no opponent has come within single digits of matching them. Crystal Falls Forest Park, in falling 60-50 in this season’s Regional Final, gave North Central its closest game of the two-season run.

Leaving no doubt: Three 11-player champions made especially impressive runs to Ford Field, eliminating a number of contenders along the way. Grand Rapids West Catholic won its fourth straight Division 5 championship by playing its first three games this playoffs on the road before the neutral-site Semifinal, taking down top-ranked Portland and No. 4 Lansing Catholic on the way. Division 1 No. 1 Cass Tech downed No. 2 DCC in the Final after beating No. 3 Utica Eisenhower in the Semifinal, No. 4 Saline in the Regional Final and Nos. 7 and 8 Dearborn and Dearborn Fordson as well. Pewamo-Westphalia in Division 7 had a similar story; the Pirates entered the postseason ranked No. 2, then beat No. 3 Saugatuck, No. 1 Traverse City St. Francis and No.4 Ubly before downing No. 5 Loyola.