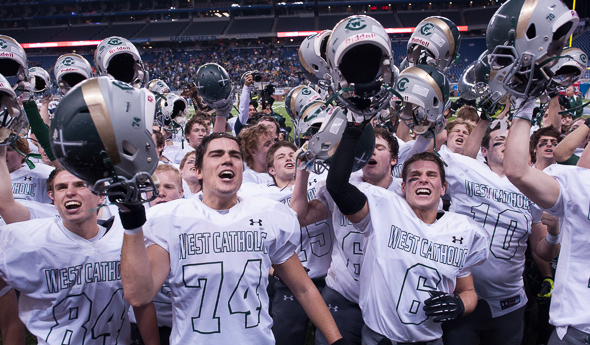 DETROIT – There were more moments than he and his teammates might’ve expected this fall when Drake Wooten sensed his high school career could soon come to an end.

That wasn’t supposed to be the scenario after Grand Rapids West Catholic advanced to the Division 5 title game in 2012 and returned a number of its top contributors this fall.

But after opening 1-4, there was no room for error. The Falcons' seniors met to prepare for three months living on the edge.

Teams need to win five playoff games to earn an MHSAA title. But the Falcons needed nine straight victories to claim their first championship since 2010. After scraping by with a one-point win in Week 9 just to earn a chance at an at-large bid, West Catholic stormed through the postseason and finished the run with a 27-14 win over top-ranked Menominee on Saturday at Ford Field.

Menominee (13-1) and reigning champion Portland – which beat West Catholic 12-9 in the 2012 Final – were the only teams to get within 15 points of the Falcons during this postseason. West Catholic finished 10-4, giving it at least 10 wins in five straight seasons and six of the last seven. All four losses were to eventual playoff teams, including three Semifinalists. 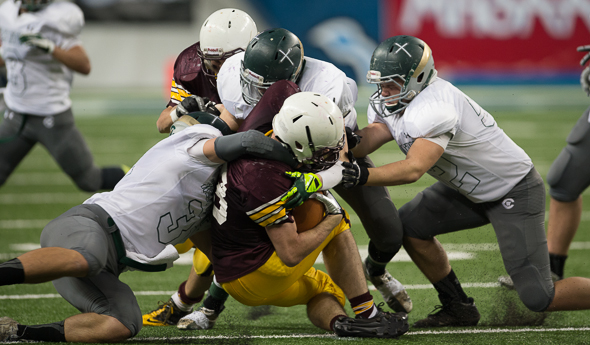 And the Falcons finished the job against a team that beat its first 13 opponents by an average of 36 points and was more than raring to go after being eliminated by West Catholic each of the last three seasons – including twice in Semifinals by four or fewer points.

“It’s become a power struggle,” West Catholic coach Dan Rohn said. “We look forward to playing them. We don’t like playing them, but we circle it when we get the opportunity. This was an opportunity to play them on the big stage.”

And like familiar opponents must do, West Catholic changed some things up – catching the Maroons off guard with arguably the play of the game.

With the score tied 7-7 late in the third quarter and the teams matching each other stop for stop, Rohn called a play no one but the officials expected – and only because he told them about it before the game so they were prepared when he sprung it.

“Lou Lou,” named after Rohn’s mother – who died 25 years ago when Rohn was a high school player at Muskegon Orchard View – involves tight end Bryce Witham making like he’s leaving the field with the rest of the offense while his teammates line up for a field goal attempt. But Witham stopped just short of the sideline, and at the snap took off uncovered for the end zone as junior kicker Travis Hoving lofted a 30-yard pass his way.

Hoving had been the back-up quarterback on the freshman team two years ago, and Witham had no problem reeling in the toss to put West Catholic up 14-7 with 3:26 to go in the third quarter.

“The idea is to just blend in with the rest of the team standing on the sidelines. Luckily, no one noticed me,” Witham said.

“We are going to be prepared for each other, so you need something like that,” Rohn added. “We’ve dropped (the ball) a few times in practice. We’ve overthrown it a few times. So everyone on the sidelines was holding their breaths.”

That go-ahead score didn’t decide the game, but it certainly set a direction for the final 15 minutes.

West Catholic scored twice over the next six, and its defense continued to lock down one of the state’s most productive offenses of this season.

A key to Menominee’s single wing attack is being able to get around the edge of the line and then upfield. Falcons senior linebacker Max Boorsma played on his past experience against Menominee to make sure that didn’t happen much Saturday, tying for the team lead with nine tackles as the Maroons ran for only 189 yards.

Junior defensive back Jason McDonough also had eight tackles as the Falcons caused or capitalized on two interceptions, a fumble and three turnovers on downs.

On offense, junior quarterback Travis Russell ran for 133 yards and a touchdown and threw for 176 yards and two scores. Senior Andy Corey added another 84 yards rushing. The Falcons gained 463 yards total and had only one turnover.

“Their offensive line was really big and strong, … and Corey is a tough kid with a great heart. He proved that last year in the Semifinal game we lost to them,” Menominee senior defensive tackle Mason Kewley said. “We played good enough to points, but other points we didn’t and they took advantage of those points.”

Senior James Brown did gain 102 yards and scored a touchdown on the ground for the Maroons, and junior Justin Brilinski was a standout on both sides of the ball with 71 yards and a touchdown rushing and 158 yards passing as the team’s quarterback/tailback hybrid, plus 10 tackles from his defensive end spot.

“We have no excuse. Last week in the (Superior) Dome against Oakridge we were almost flawless and a half, but we knew we were in for a battle today,” Menominee coach Joe Noha said. “The bottom line was they executed well. We knew what they were going to run, and they ran exactly what we prepared our kids to (stop). But they just made plays when they had to.”