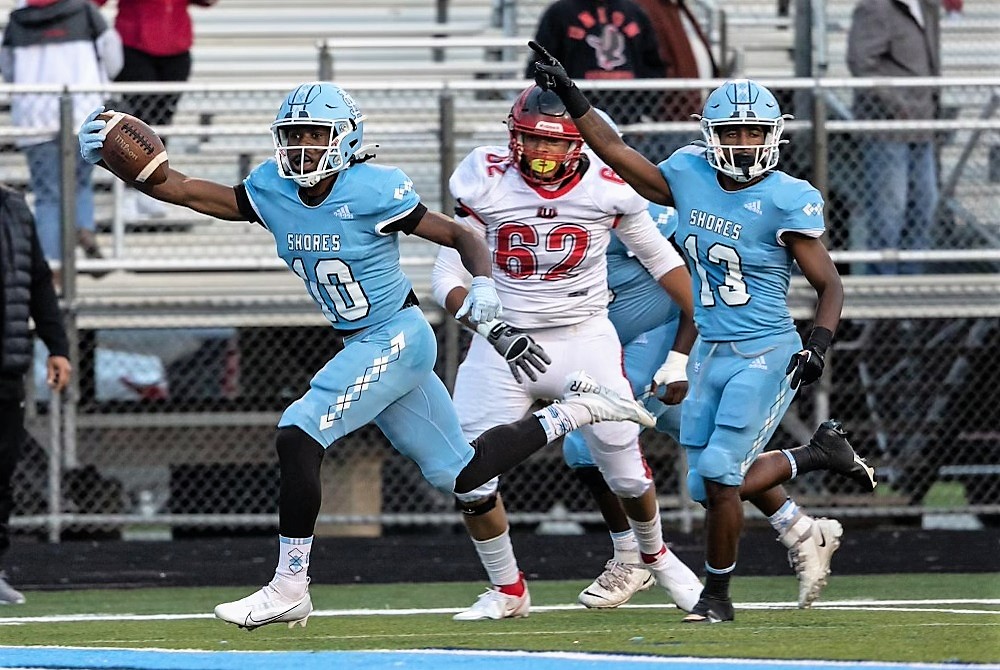 “As a captain, my teammates are following my energy, so every time I touch the ball I’m trying to score a touchdown,” said Dahmir, who is averaging 120 rushing yards per game, despite playing less than a half in three this fall.

He nearly achieved his goal Sept. 23 against visiting Grand Rapids Union, scoring four touchdowns on his first five carries (all in the first quarter) in a 64-14 victory.

While Dahmir was running wild in that game, his brother – fellow senior Ke’Waun Farnum – was equally dominant in that same first quarter on defense with two interceptions, the second one going for a pick-six.

“It’s a blessing to have two kids who are not only great athletes, but unselfish teammates and hard-workers,” said 12th-year Mona Shores coach Matt Koziak. “Their roles have been elevated on both sides of the ball this year. They almost never come off the field.”

The Farnums have brought stability and leadership to the young Sailors, who are breaking in new sophomore quarterback Jonathan Pittman as well as many new faces on the offensive and defensive lines.

Mona Shores, 5-1 and ranked No. 3 in Division 2, has been dominant in every game this fall – except for the final 16 minutes against undefeated Rockford, when the host Rams rallied from a 27-7 deficit for 24 straight points in a 31-27 win.

“We have to keep that high level of play for four quarters and not take our foot off of the pedal,” explained Ke’Waun.

The Sailors appear to have learned their lesson, impressively defeating quality opponents the past two weeks. Against Union, the offense took center stage, scoring 43 points in the first quarter. Last week at Zeeland West, Shores allowed a long touchdown drive on the opening possession, then completely shut down the Dux’ wing-T the rest of the night in a 34-6 win.

The Farnum brothers showed their versatility and strength in that win at Zeeland West, which was undefeated and ranked No. 4 in Division 3 at the time. Dahmir, who plays outside linebacker, was moved inside due to an injury, and Ke’Waun was shifted from cornerback to his brother’s outside backer spot.

“They both played lights-out,” explained Koziak, who works primarily with the offense along with offensive coordinator Aaron James, while Dave Check is the defensive coordinator. “People talk about their speed all the time, but they are both big-time weight room kids who are very strong. They proved against Zeeland West that they are both willing to do anything that we ask them to help our team win.”

Ke’Waun (5-9, 175), who Koziak ranks as one of the best cover cornerbacks he’s had at Shores, has 10 receptions for 177 yards and three TDs from his slot receiver position. He also has two rushing touchdowns and returns punts and kickoffs. On defense, he has 11 tackles and two interceptions.

“They are two totally different players,” explained Koziak. “It is unbelievable, as a coach, to have two brothers like these two who give you so much. They do whatever we ask them to do.”

The Farnums are both three-year starters who played key roles as sophomores during the Sailors’ undefeated 2020 season, which culminated with a 25-19 win over Warren De La Salle Collegiate for their second-consecutive Division 2 championship. That season was particularly special, as Dahmir and Ke’Waun played on the same team with their older brother, Elijah.

Last season was disappointing, at least by Mona Shores’ current lofty standards, as the defense allowed too many big plays and 40-plus points in losses to Detroit Martin Luther King, Muskegon and Caledonia. The Sailors’ season ended with that defeat against Caledonia in a Division 2 District Final.

“I was out for that (Caledonia) game with COVID, and it was a helpless feeling watching them take it to us,” said Ke’Waun. “We started getting ready for this year as soon as that game was over.”

Shores hosts Zeeland East this week, then closes the regular season on the road with crosstown rivalry games against resurgent Muskegon Reeths-Puffer (5-1) and Muskegon (4-2).

Dahmir is the more vocal of the two brothers, while Ke’Waun keeps to himself and leads more by example.

Both are considered Division II college football prospects – Dahmir as a running back and Ke’Waun as a cornerback. They know it is a possibility that they could end up at the same college, but chances are their many years of playing on the same team – going all the way back to elementary youth football – will likely be coming to an end next month.

“I love everything about high school football, including being able to play with my brother,” said Dahmir, who goes to Buffalo Wild Wings with his brother and their father, Willie Farnum, after every game. “We are very close and we are very competitive. We are going to enjoy every minute that we get playing together.”