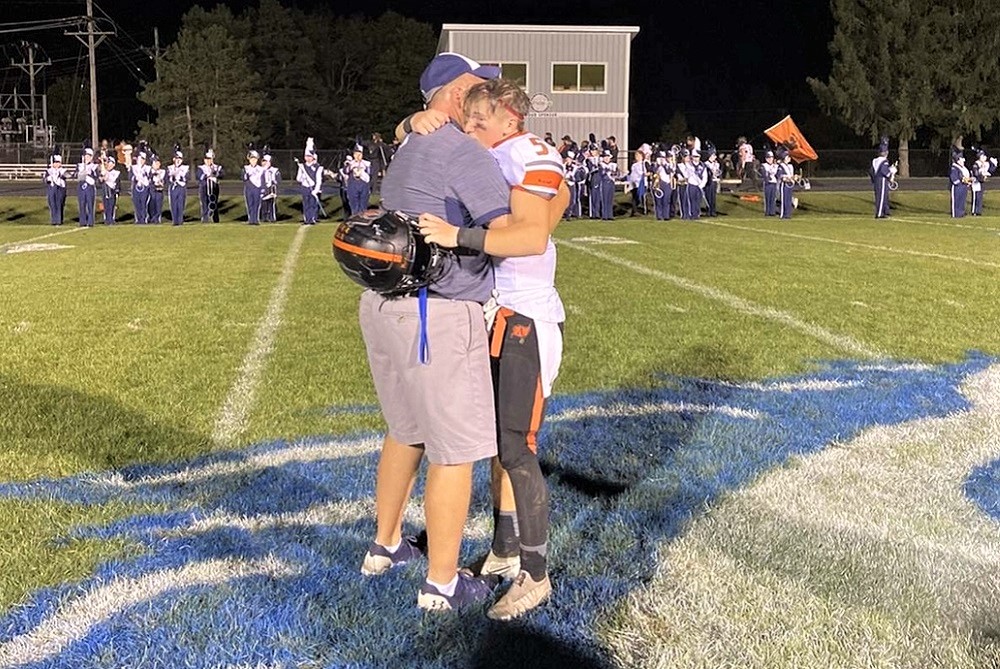 For about 2½ hours Friday night, Jeremy and Bryce Ferman will be opponents.

During that time, it will be about North Branch and Almont battling to remain unbeaten on the football field. About getting another win in the Blue Water Area Conference.

But immediately before and immediately after, their dynamic will be a much more familiar one, and one that was strengthened by the sport: father and son.

“I love him more than anything,” said North Branch coach Jeremy Ferman. “Just to see him over there, that part of it right there is special. Just to see how he’s grown up and the person that he is – the young man that he is. But yeah, once kickoff goes, it’s game on. We’re both competitive people. We probably hate losing more than we enjoy winning.”

Bryce Ferman is a senior running back and linebacker at Almont. He’s also a captain.

He grew up on the Almont sidelines, as his dad turned the Raiders into a perennial power. From 2004-15, Jeremy Ferman led Almont to the playoffs eight times, including trips to the Semifinals in 2011 and 2014. The Raiders won five BWAC titles, three District titles and two Regional titles during his time there.

And that success was made more special by the fact Bryce was right there for all of it.

“There’s a picture of him wearing an old headset, and it wasn’t working, but he had it on,” Jeremy Ferman said. “Some reporter took a picture of him and said, ‘Coach Little Ferman making the calls.’ It’s definitely been in his blood.”

As the Fermans were strengthening their father-son bond through football, Bryce also was soaking in lessons of how to be successful on and off the field.

On it, all he knows is winning. Almont has been to the playoffs every year since 2010, including a run to the Division 5 Final in 2019, Bryce’s freshman year.

As a player, he’s won a pair of postseason games – one during his sophomore year when he was called up late in the season, and one as a junior. This year, the Raiders are off to a 3-0 start.

“I learned how a good, sound football team should run,” he said. “I mean, that’s what my whole life has been. I’ve never been around a poorly run or structured team. It’s always just been that every year the playoffs were expected, and that’s how it still is.” 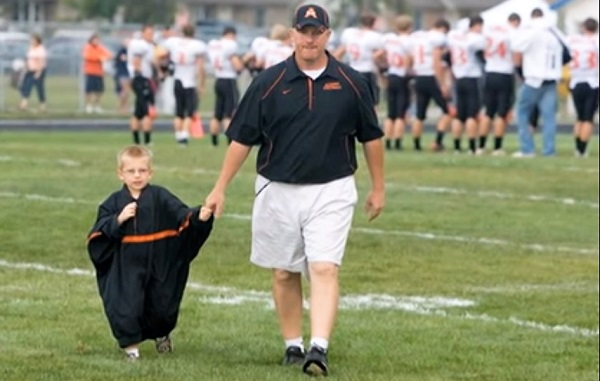 The greater lesson learned on those sidelines, though, was how to be a leader. It’s something he focused on as he worked to be part of Almont’s leadership team heading into his junior year.

“We had to go through interviews, write letters, all the stuff that really prepares you for jobs and everything,” Bryce said. “What I wrote my letter on is how I saw all these leaders growing up. That’s all I know. That’s all I know how to be.”

Watching his son make the most of those lessons has been a point of pride for Jeremy Ferman.

“To watch him mature, to watch his leadership – as a dad, it’s pretty (darn) special,” he said.

Following his time with Almont, Jeremy Ferman spent a year apiece with Durand and Flint Kearsley before taking over the North Branch program in 2017. Over his first five seasons, Ferman has taken the Broncos to the playoffs four times, including a run to the Regional Final in 2020. Prior to his arrival, the program had three playoff appearances all-time.

The benefit of the two now competing in the same conference is that they get to compare notes on other teams. And having grown up around football, Bryce has become quite a student of the game. The two break down film together regularly, and even when their teams or opponents aren’t involved, their viewing experience involves analyzing the action on the field. Jeremy Ferman remarked that he would welcome Bryce on his coaching staff, whenever he’s done playing.

So while this week there will be no talk of strategy, there is normally plenty of it.

“We both played Imlay City already, I played them the week before he did, and he picked my brain a little bit and we watched film together,” Jeremy Ferman said. “I help him out with personnel, and vice versa. He’s helped me out. We talked about Hamtramck (Almont’s Week 2 opponent, which North Branch plays in Week 5), a little bit. … He wants me to be successful, and I want him to be successful, as well.”

The common opponents also give Jeremy Ferman a chance to see his son on film as he’s breaking down other teams.

“I always have my dad hat on, but my coaching hat kind of gets bigger sometimes,” Jeremy Ferman said. “I have a job to do there. But yeah, you’re watching film and he’s playing against them, and I’m peeking. I’m seeing what he’s doing and then I’ll say, ‘Oh crap, that’s right. I’m Dad, but I’m the head coach right now.’”

Friday night’s game won’t be the first time the two have squared off. A year ago, North Branch defeated Almont 20-14 in a hard-fought game.

That doesn’t make this upcoming matchup any easier, of course, but the Fermans are approaching it in the same way.

Added Bryce: “It doesn’t matter who I’m going up against. When we’re out on the field, between the lines, we’re playing football. But from before and after the game, (this week) is a different story. And that’s with a lot of the kids up there, too. I mean, I know a lot of them. But it doesn’t matter when we’re between the lines and we’re playing.”

PHOTOS (Top) North Branch coach Jeremy Ferman and Almont junior Bryce Ferman hug after last year’s matchup between their teams. (Middle) Jeremy Ferman, then the coach at Almont, accompanies Bryce across the field about a decade ago. (Photos courtesy of the Ferman family.)