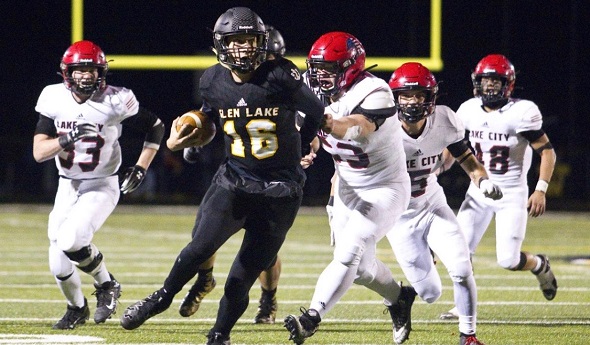 There’s nothing that could spoil Jerry Angers’ mood right now.

When you love coaching football as much as Maple City Glen Lake’s varsity leader, being able to continue preparing your team deep into the playoffs trumps any tough situations that might come along.

That’s why an early-season snowstorm that hammered Leelanau County and shut down a number of schools in the area hardly registered as problematic for Angers, who is guiding his Lakers into a Division 6 Regional championship game against Calumet on Saturday — a clash of 10-1 squads aiming to advance to the Semifinal round.

“It’s totally awesome,” said Angers, in his 11th year in charge of the Lakers. “We’re getting pounded with snow up here, and we’ve got guys plowing our field off. We practiced in the gym today because it was snowing so bad. We were told we had to go home early. I wouldn’t trade that adversity for anything.”

This will be the second time in the last four years Glen Lake has ventured to the Upper Peninsula to face the Copper Kings. In 2016 the two teams met in the same round of the postseason, with the Lakers pulling out a 14-0 win on the way to reaching the Division 6 Final against Jackson Lumen Christi, which won the title with a 26-14 victory. Nearly all of the 16 seniors on Glen Lake’s roster were freshmen on the 2016 team and have the experience of an eight-hour bus trip to the Keweenaw Peninsula under their belts.

“That’s a really cool similarity because those kids have experienced this trip,” said Angers. “They weren’t playing, but they experienced what it took to get there.”

Angers makes the experience more than just playing the game. Getting in a practice on the way to Calumet, the team meals, the hotel stay — each aspect becomes part of the joy of the journey.

“It’s fun getting on the bus and basically spending two days with the kids and experience all the different things,” said Angers. “It’s like college football life on the high school level.”

There’s little doubt this is a business trip for the Lakers, though.

“(They are) definitely a typical U.P. power team. They want to run downhill and run the clock out and just keep smashing you in the mouth.”

Angers admits to being superstitious enough that he’s trying to mimic as much of the trip this time to the one in 2016 in hopes that it can lead to a similar outcome. Just maybe not an exact mirror, however.

Right as the Lakers were getting ready to head from the hotel to the field in that Regional contest in 2016, they realized they had been locked out of their bus. Without panicking, players had to file into parents’ vehicles to transport them to the game in time. The Lakers managed to overcome that moment of turmoil by winning the game.

“So, if that’s what goes wrong and you still get to play a game? I was laughing about it,” said Angers. “How many other people are playing football right now?”

The seeds for this season were sown during an up-and-down 5-5 campaign a year ago that included a first-round playoff loss to Beaverton. The senior class — which showed its potential when it got significant playing time and performed well in a postseason victory against Roscommon as freshmen — wanted to leave its own legacy with a deep playoff run like the one the Lakers experienced three years ago.

“That was a huge motivation,” said senior lineman Ben Kroll. “We hated how we exited last year. We did not like the way we played. We do a boot camp every summer before the season starts. It was definitely the best boot camp I’ve been to, how close we all were and how we get along. We’ll fight for each other every day.”

Glen Lake has good athletes at the skill positions. Wright is in his second year starting on offense — he’s also been a three-year starter at linebacker — and is the leading rusher. Quarterback Reece Hazelton, at 6-foot-7, has a greater stature than a typical high school quarterback, though his best sport is basketball. He signed his letter of intent Wednesday to play hoops for Ferris State. His favorite target is junior receiver Finn Hogan.

The line, a position group near and dear to Angers’ heart, is the heartbeat of the team, with seniors Garrett Tremble, Dylan Kilinski, River Dallas and Kroll, and junior tackle Sam Keys.

“Without them nothing would happen,” said Wright.

Angers makes sure everyone on the roster knows they have key roles, whether it’s starting on offense, defense or special teams. Guys who make up the scout team are held in high value. Angers can go down the line and name off kids on his team and big plays they’ve been able to make at some point this season.

“There’s 31 kids I can turn to at any time, and I feel very comfortable and confident that they’re going to go in and get the job done,” said Angers. “Next man up. You’re one play away from being a starter. I think these kids also understand that.”

The Lakers have gone through a brutal schedule nearly unscathed. Five of the nine teams on the schedule qualified for the playoffs, and four of those teams won at least one postseason game. The schedule is specifically created that way for Glen Lake to be properly prepared to handle tough teams during the playoffs.

The one slip up came in the seventh week when Kingsley — which remains undefeated and is playing for a Regional crown in Division 5 — handed the Lakers a 53-14 loss. Angers shoulders the blame, saying he didn’t have the Lakers ready for a game of that magnitude and Glen Lake was uncharacteristically sloppy.

“That was a real wake-up call, and I think that was really good for our team because now in these playoff runs we know we can’t take any days off, any moments off,” said Kroll.

The ultimate goal, of course, is to win the Division 6 championship at Ford Field. Two more wins and Glen Lake will be back in the position it was in three years ago, playing in Detroit with a title on the line. Glen Lake’s last football championship came in 1994 when the Lakers won the Class DD crown with a 20-10 victory against Waterford Our Lady of the Lakes.

“There’s nothing like it,” said Wright. “All the lights are on you. You’re at the center of a huge dome, and it feels amazing. I just want to get back to that.”

The memory of being in Detroit for Thanksgiving weekend is still fresh in Angers’ mind — arriving at the stadium and feeling the electricity in the air as an earlier game unfolded.

“One of the coolest experiences was when we were all walking in from the bus into the tunnel and there was a big play made in the game before us,” said Angers. “The crowd just erupted, and it just ran down that tunnel. My kids, they were just starry eyed and they looked at me and I went, ‘You’re in the big time boys.’”

And nothing could be better than that.