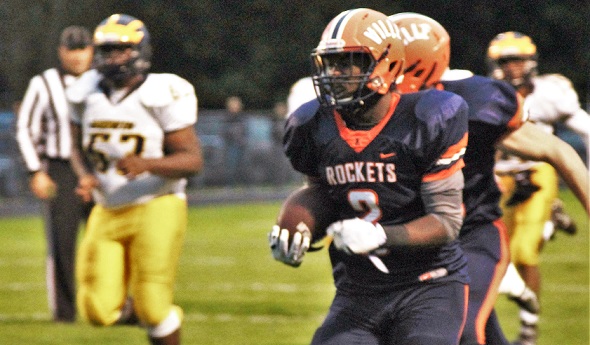 WYOMING – If opposing teams think it’s going to be easy tackling Thomas Griggs this season, they might want to rethink their approach.

Griggs, a 5-foot-10, 210-pound running back for the Wyoming Kelloggsville football team, is difficult to stop and a load to bring down.

“He was referred to in the South Bend Tribune last year as a bowling ball with legs,” longtime Rockets head coach Don Galster said. “Those kids did not want to tackle him.”

Just a year ago, Griggs blossomed into one of the top running backs in the Grand Rapids area while leading Kelloggsville to a major turnaround.

The Rockets went 3-6 in 2015, but behind Grigg’s breakout season, finished 8-2 while winning the Ottawa-Kent Conference Silver title with an unbeaten league run.

Those eight were the most wins for a Kelloggsville team since 2009, when it went 10-1.

After a wild 50-47 loss to Whitehall in the opener, Kelloggsville reeled off eight straight wins and advanced to the playoffs. Its season, however, ended in Pre-District play against former conference rival Allendale.

“Last year was really good,” said Griggs, a three-year starter. “Everybody didn’t think we were capable of doing what we did, but our senior class last year put in the hard work. Being able to contribute to last year’s success made me feel even better.”

Griggs rushed for nearly 1,400 yards and tallied 20 touchdowns. He averaged 8.7 yards per carry while wreaking havoc on opposing defenses.

“My stats were good as a sophomore, but we didn’t win a lot of games,” Griggs said. “Coming into my junior year I knew I was going to do better because I worked hard over the summer.”

Griggs, a soft-spoken young man with aspirations to play college football, has a valuable skill set. He’s a punishing hard-nosed runner, but possesses other key attributes.

“What makes him special is he’s got great vision, great feet and he reads blocks very well,” Galster said. “He just doesn’t want to go down, and he has learned how to run the ball in our offense, which has been key.”

As evident by his yards per carry average, it typically takes more than one defender to pull Griggs to the ground. He takes pride in his ability to stay on his feet.

“I always want to break at least one tackle every play,” Griggs said. “I don’t want to let that first person tackle me, and I try to get as many yards as I can.” 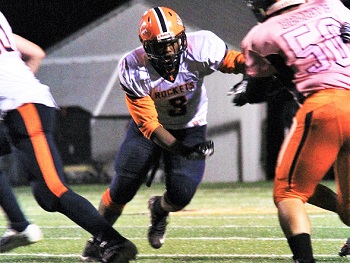 Galster remembers his first encounter with his standout senior. It was an early glimpse into the future.

“He was in eighth grade and the principal brought him over to introduce me to him,” Galster recalled. “I thought, ‘This is a big kid,’ and he just has a ton of ability. He works hard, and he’s a quiet leader. Every year he’s gotten better, and he makes the other guys better.”

Griggs started playing football when he was 7. He actually started out as a center before moving to fullback.

It was a role he embraced.

“In my head, I think I can do anything. So when they put me at center, I had the mindset of I was going to be the best center,” Griggs said.

The Rockets are expected to compete for another conference crown with a bevy of talent back in the fold.

Griggs is one of three returning to the backfield, including dual-threat quarterback Alex Guzman. The Rockets graduated only two seniors on offense.

“There’s not a lot of jealousy with those guys, and it motivates them to work harder,” Galster said. “We have a lot of weapons, but these guys understand that it all starts with the offensive line. If they open holes for them, then we will have some success.”

Griggs said having multiple options on the ground will make it tough for other teams to game plan.

“It’s better for us as a team because other teams can’t come into the game saying they are only going to stop me and then they are going to win,” he said. “We have other players that are going to show up and do what they have to do.”

Kelloggsville’s senior class is a tight-knit group with the potential to duplicate last year’s run.

“As a group, we’re pretty good, and we have that hate-to-lose mentality,” said Griggs, who also averaged 19 points per game as a starting basketball point guard last winter. “I’m glad people have started to notice us, and now we just have to keep it going.”