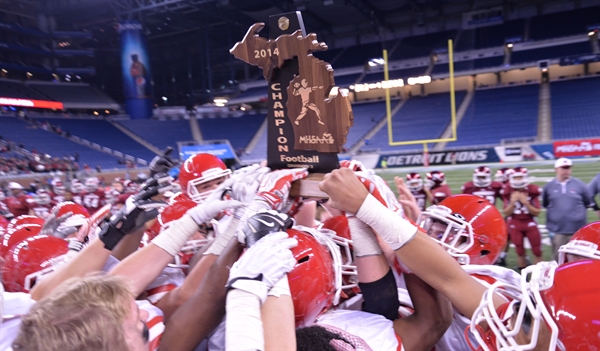 At a time when excitement should've been rising within the Orchard Lake St. Mary's junior, he was holed up in his bedroom, coming to grips with the lowest moment in his young life.

Football? Who cares about something as trivial as football — even a state championship game — when your mother just died two days earlier?

Playing a game may not have been important, but fulfilling a promise to his mother and continuing to live as she would have wished helped him to get up, get out of his room and move forward.

"At first, I didn't think I was going to play this game," said Adams, whose 1-yard run with 5:42 left in the first quarter was the only touchdown in the Eaglets' 7-0 victory over Muskegon in the MHSAA Division 3 Final on Saturday night at Ford Field.

"Thursday, after she passed, I was sitting in my bed at home. My dad walks in and says, 'I don't want you to sit here and sulk,' so I went to practice Friday. We had a team meeting at 1 before our practice at 2. All the guys gave their condolences and said, 'We're not losing this game. We're making a promise to God, to my mom and to the team that we're gonna win,' and we did. I don't know. It's just ..."

Adams' voice trailed off as he held the game ball, standing before reporters and bravely articulating his feelings while still in the midst of grief.

His mother, Katie, was diagnosed with Stage 4 lung cancer three months ago. She continued to follow her son's team, all the way up through the Semifinal victory over New Boston Huron just five days before she died on Thanksgiving.

"All the guys came to the hospital, because she was in hospice for her last hours," Adams said. "The one thing she was saying to all the guys was, 'I'm going to watch the game on TV and I want you guys to bring me back the trophy. Well, she's not here, but we did. It was a promise my brothers made to me and to my family and to each other that we would win the game.

"She never missed a game. Even with her chemo, she was sick as a dog and she'd come sit in her car and come watch. This was the first game in my football career she's missed."

In a time of tragedy for the team, St. Mary's coach George Porritt saw inspiration in the way Adams was supported by his teammates.

"The last 48 hours have been a whirlwind," Porritt said. "What's great is watching kids take care of kids when there are tough times. This team rallied behind this kid. Last night was special." 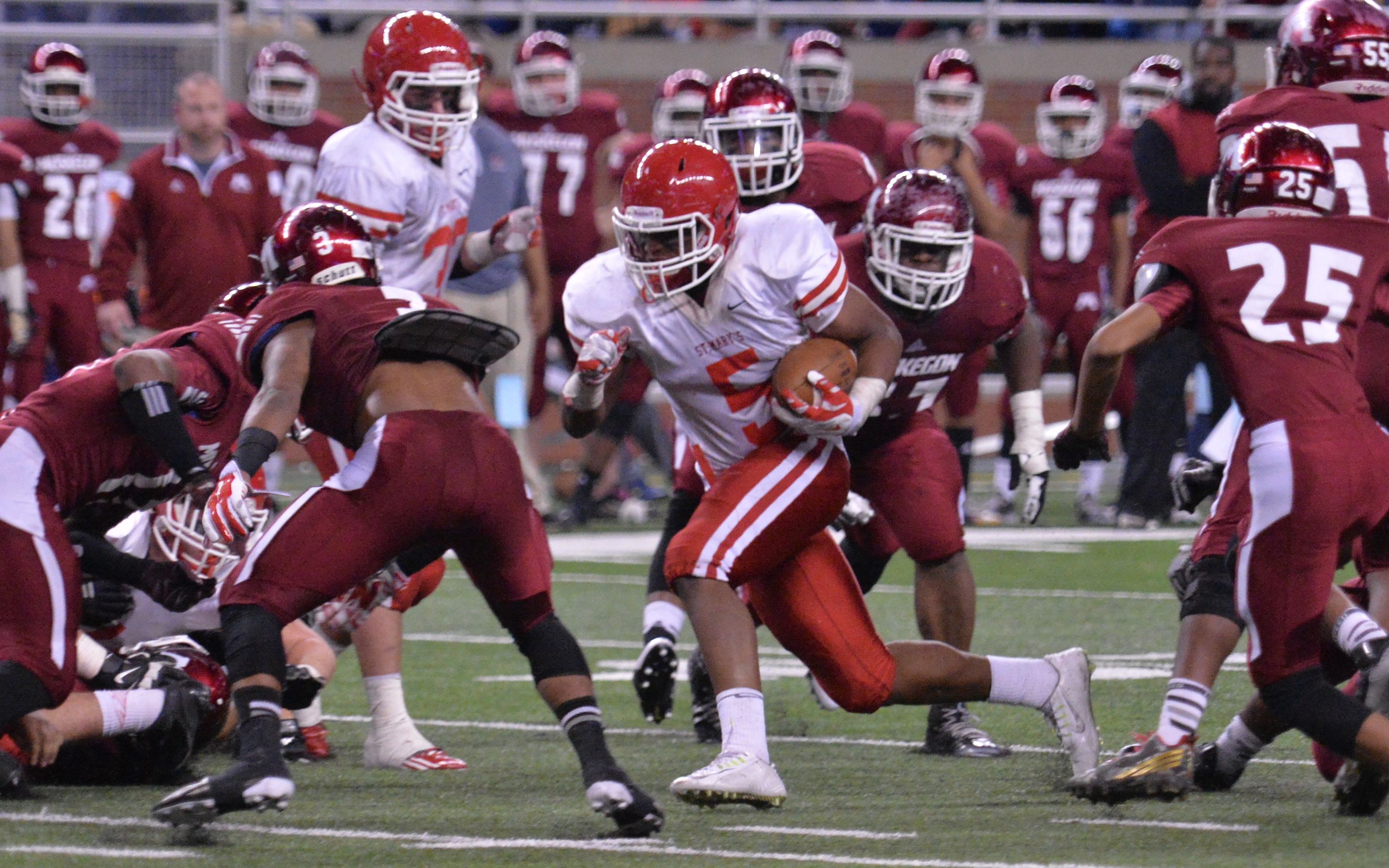 From a football standpoint, Porritt supported Adams by giving him two straight carries after his fumble nearly ended the game's only scoring drive.

Adams broke through the line and appeared primed to scamper into the end zone on a 4-yard run from the 6-yard line, but he lost the ball, only to recover it himself.

Adams got the next carry, moving the ball one yard closer to the end zone, before going untouched around the left side to cap a nine-play, 34-yard drive.

Adams was appreciative of the opportunity to get the next two carries following his fumble.

"My coaches are very persistent on hanging on to the ball," he said. "After that fumble, it's human nature to get down on yourself and hang your head, but my coaches kept preaching, 'Hold your head up, we'll get through it,' and they gave it back to me again. I knew I was going to get into the end zone."

Porritt insisted that Adams wasn't given the chance to bounce back just because he was going through a hard time in his life.

"Sometimes we like the kid to get the ball right away, get it right back in his hands," Porritt said. "We had to have him."

Real life beyond the football field was also the theme for Muskegon as coach Shane Fairfield addressed his players after the Big Reds lost in an MHSAA Final for the third straight year. They lost to Birmingham Brother Rice in the last two Division 2 title games.

"It's not going to be easy," Fairfield told his team. "It hurts. It should hurt, because it means so much. ... We have to continue the pursuit of greatness in our lives."

Adams tempted fate with his early fumble, but wasn't as fortunate in the second quarter. On second-and-goal from Muskegon's 2-yard line, Alezay Coleman popped the ball loose from Adams' grasp and Taron Smith recovered for the Big Reds with 10:53 left in the first half.

Having escaped a possible early 14-0 deficit, Muskegon's offense began to click after its first three possessions resulted in only four yards on eight plays. The Big Reds marched 95 yards in 14 plays, taking 6:56 off the clock, but came away with no points when they also failed to score from the 2-yard line.

Those missed opportunities by each team from the opponents' 2-yard line would be the closest either would come to scoring after the Eaglets opened up with a touchdown.

The defensive standoff was surprising, given the fact St. Mary's averaged 47.5 points and Muskegon 37 in four playoff games.

The Eaglets nursed their 7-0 lead through a scoreless second half by not allowing Muskegon to get closer than 31 yards from the end zone.

The Big Reds had four possessions after halftime, with two ending in interceptions. Tyler Cochran picked off a pass on the first play of Muskegon's second possession of the third quarter. The key interception came with 6:37 left in the game when Dwayne Chapman came up with an errant pass on fourth-and-three from the St. Mary's 31.

Muskegon would never touch the ball again. St. Mary's ran out the final 6:37 by getting four first downs on a 14-play possession that covered 49 yards.

When time expired, St. Mary's had its sixth MHSAA title, while the Big Reds had to settle for the runner-up trophy for the third year in a row.

"A lot of teams around Muskegon can't say they've been there three years in a row," Muskegon senior lineman Rowland Sharp II said. "I've been here since my sophomore year. I'm very proud to say I made it to Ford Field. As I go into my career, I'll be able to say, yes, I played at Ford Field; that's an NFL stadium I played in."

EAGLETS THWART MUSKEGON'S LAST CHANCE - Muskegon's last offensive chance came near the midpoint of the fourth quarter, where on a fourth down play, a Big Reds pass by intercepted by Orchard Lake St. Mary's Dwayne Chapman. The Eaglets then ran out the clock and won the Division 3 championship game, 7-0.