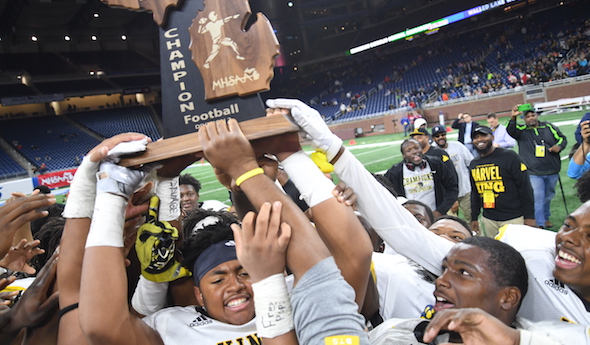 A pair of repeat champions took center stage Friday at the first day of the MHSAA 11-Player Football Finals, powered by the Michigan Army National Guard, at Ford Field in Detroit.

Due to technical difficulties, highlights of this game will be posted at a later date.

Tip Drill Turns Into King TD - A tipped ball turned into a pick-six for Detroit Martin Luther King, as Jesse Scarber came up with this second interception of the game returned this one 56 yards for a score.

More Pick-Six Action By Morton - Detroit Martin Luther King returned a second interception for a score in the fourth quarter when Jay-Veyon Morton took this pick back for a TD.

Lakers Back In The Game - Trailing in the second quarter, Maple City Glen Lake gets back into the Division 6 Final when QB Cade Peterson finds a streaking Nick Rice going down the sideline for 57 yards and a score.

Ring The Bell - Jackson Lumen Christi's Bo Bell came up big with 238 yards rushing. Here's his longest run of the day, a 46-yard jaunt in the third quarter which set up a 3-yard scoring run – his lone TD of the game.

Yellowjackets Score On The Interception - Trailing in the second quarter, Detroit Country Day seized the lead when Roy McCree intercepted a pass and returned it 82 yards for a score.

Finding Its Offense At The Right Time - Early in the fourth quarter, Grand Rapids Catholic Central gets its lone first down of the Division 4 title game on this 44-yard pitch-and-catch from Jack Bowen to Michael Brown.