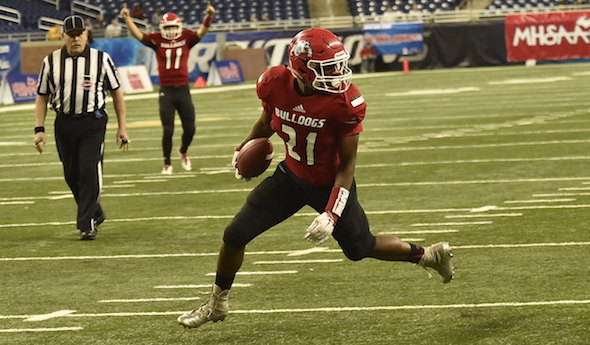 Below are highlight clips from every game plus links to watch them in full.

Smith’s Record Setter – Pewamo Westphalia scored first on this 25-yard run by Jared Smith, his 53rd of the season, a new MHSAA record. He also set a record in 2015 for single-single rushing yardage with 3,243 yards.

Ozzy Does It All – After scoring all three of his team's touchdowns, Ishpeming's Ozzy Corp makes the defensive play of the game by batting away a fourth-down pass in the end zone.

Tanner Breaks Free For TD – Romeo's Bradley Tanner rushed for 130 yards and three TDs in the Division 1 Final against Detroit Cass Tech. Here's his second score, in the second quarter.

Cass Tech Gets Back In The Game – Detroit Cass Tech pulls within a score of Romeo midway through the fourth quarter on this 36-yard pass from Aaron Jackson to Donovan People-Jones.

Fox On The Run – David Fox rushed for 152 yards and three touchdowns to lead Grand Rapids West Catholic in its Division 5 Final with River Rouge.  Here’s the first of those scoring plays – a 64-yard run at the end of the first quarter.

Burgess TD Pass to Vinson – River Rouge QB Antoine Burgess passed for 354 yards and three TDs in the Division 5 Final against Grand Rapids West Catholic.  Here’s a third-quarter pass that went 63 yards for a score to Aaron Vinson, who had 162 yards receiving in the game.

Bulldog Trickery – Chelsea got on the board in the second quarter on a halfback pass covering 47 yards from Graham Kuras to Noah Vanreesema.

PHOTO: Romeo's Bradley Tanner makes a move toward the end zone during the Division 1 Final as teammate Paul Hurley appears to signal the touchdown to come.