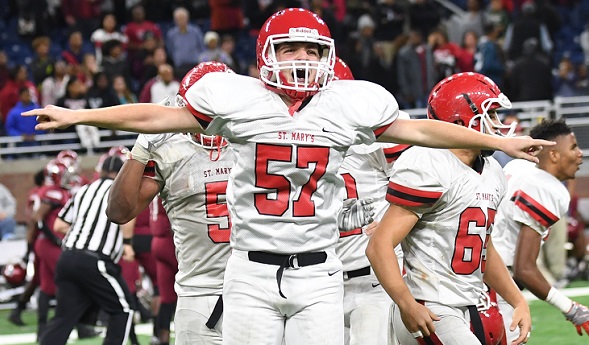 The final day of the MHSAA 11-Player Football Finals at Ford Field in Detroit – powered by the Michigan Army National Guard – produced a first-time gridiron champion and a game-winning play that will be talked about for a long time.

Johnson Powers Into the End Zone - Detroit Loyola gets on the board midway through the fourth quarter, when TE Keith Johnson makes a great play to catch a pass from Price Watkins and then power into the end zone to complete the 18-yard score.

CC Takes the Early Lead - Detroit Catholic Central led 14-7 at the end of the first quarter, taking the lead on this 35-yard pass interception return by Jack Morris.

Meyers Off to the Races - Grand Rapids West Catholic scored its first TD against Menominee on a pitch and catch from Gaetano Vallone to Brett Meyers covering 91 yards.

Hass Records a Finals First - Menominee uses special teams to get on the board in the third quarter. Sam Larson blocks the West Catholic field goal attempt, and Hunter Hass returns it 76 yards for a TD – the first time in Finals history a blocked field goal has been returned for a score.

Pimpleton's Second Score - Lined up in the slot, Muskegon's Kalil Pimpleton gets his second 18-yard rushing touchdown of the Division 3 Final against Orchard Lake St. Mary's on the end-around to give his team a 21-20 lead early in the fourth quarter.

A Catch for the Ages - In the closing seconds of the Division 3 Final, Orchard Lake St. Mary's QB Caden Prieskorn hits Ky’ren Cunningham in the end zone with an 18-yard touchdown strike to give the Eaglets the win.