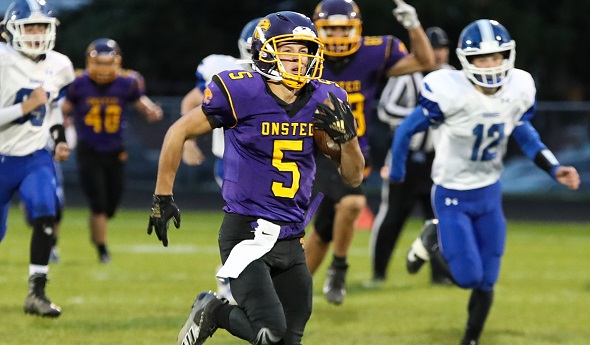 But it was those three games that helped pave the way for the senior to rush for more than 1,300 yards and help the Wildcats reach this weekend’s Division 6 Semifinals.

Hill broke his collarbone at practice the Wednesday before Onsted’s season opener in 2018.

“They told me I wouldn’t be back that season,” Hill said. “I recovered quick, I guess.”

Hill’s competitive drive put him on the fast track. He was back on the field for the final three games of the season. The Wildcats finished 3-6 on the year, but Hill’s return was important.

“It was pretty difficult (to come back),” Hill said. “But, those three games helped me be mentally prepared. … The first couple of plays, I was hesitant. But ever since then, I’ve felt good and confident in it.”

Last football season wasn’t the first time Hill had to miss time from the court or field. He broke the same collarbone during his sophomore basketball season. He was one of the key players on Brad Maska’s varsity hoops team when he went down with the injury.

“It’s been great and so much fun,” Hill said.

“We had a hot start, and then lost two games in a row. We could have either went up north and played really well, or we could have went south. We decided to get our stuff together and play well as a team. We’ve been playing pretty well since then.”

Hill has been a big reason why.

Through the Regional Final win over Hillsdale, Hill has 186 carries for 1,312 yards on the ground and another 23 receptions for 390 yards receiving. He has rushed for 14 touchdowns, caught four passes for touchdowns and returned a kick for a score.

He seldom takes a play off.

“He’s very talented but, more than that, it’s his competitive spirit,” Onsted coach Dan Terryberry said. “He just wants to win so bad. He’s explosive and doesn’t want to be denied.”

The Wildcats will face Monroe St. Mary Catholic Central in their Division 6 Semifinal at 1 p.m. Saturday at Ypsilanti Lincoln High School. For Onsted, this has been the deepest run in the playoffs since Hill’s uncles – including one of the most prolific passers in Lenawee County history John Hutchinson – led the Wildcats to the 1993 Class CC championship game.

Coach Terryberry credits the Wildcats offensive line for much of the success.

“This is the first year that line has played all together, and a couple of them are playing new positions,” said Coach Terryberry. “They have grown a lot this season. They’ve bought in and are playing well.”

Dylan Stevens is one of those linemen. He’s a senior, like Hill, and is glad to have his classmate back for this season.

“It’s made a huge difference,” Stevens said. “Travis is an outstanding athlete on both sides of the ball. Not having him last year hurt us quite a bit.”

Terryberry, in his 16th season as Onsted’s head coach, is from Charlevoix. A former high school quarterback, he walked on at Michigan State. He started teaching and coaching at Tecumseh, where he served as offensive coordinator for the varsity football team and as the junior varsity head coach.

Having Hill play in those three games at the end of the 2018 season, Terryberry said, put any fears about the injury to rest.

Hill has had numerous big games. He had 190 yards rushing against Dundee, and more than 175 against Blissfield in the first round of the playoffs. The Onsted faithful are hoping for at least one more big game Saturday against the Falcons (10-1), who were the No. 1-ranked team in the final regular-season Associated Press poll.

“It’s been a great experience so far, and we hope we aren’t done yet,” Hill said. “… I think it’s a mindset. We’ve played well. We knew we had the opportunity; if we put the work in, we could just keep going and keep going farther.”

PHOTO: Onsted's Travis Hill (No. 5) rushed for more than 1,300 yards this season, a year after missing six games due to breaking his collarbone. (Photo courtesy of Onsted Athletics/T.J. Olsen.)