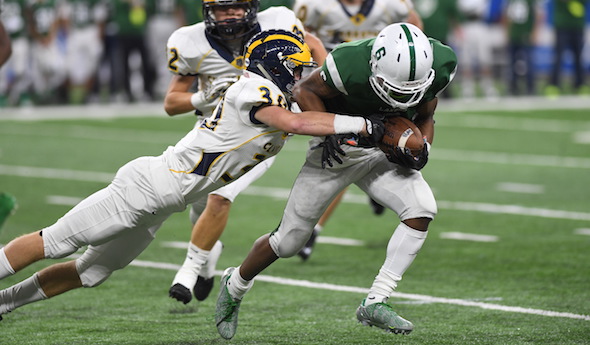 DETROIT – The final score of the Clarkston-West Bloomfield Division 1 Final might cause many football purists to cringe and scoff in disbelief.

Richardson and his staff should be applauded for the job they did this season. Clarkston may not have been loaded with star power this season, but won its third Michigan High School Athletic Association title by defeating West Bloomfield, 3-2, in the Division 1 final on Saturday at Ford Field.

The teams combined for the second-lowest points total in Finals history. In 1987, Ann Arbor Pioneer defeated Detroit Catholic Central, 3-0, in the Class A Final.

Clarkston (12-2) finished third in the Oakland Activities Association Red this fall behind West Bloomfield and Rochester Adams, which tied for the division title. West Bloomfield soundly defeated Clarkston, 37-16, in the fourth game of the season, and the Lakers were a sensible pick to win again.

“That’s what these kids have been about all season,” Richardson said. “(They) find a way to win.

Clarkston was never a team that wowed with statistics this season. The Wolves relied on their running game, a strong defense and a good kicking game.

Against West Bloomfield – a team with no fewer than 10 players who have either committed to or received a scholarship offer from a Division I college program – Richardson wanted to shorten the game and win the turnover battle.

In its first game against West Bloomfield, Clarkston committed four turnovers. On Saturday, the Wolves had a 3-0 edge.

“We knew they were going to blitz more,” West Bloomfield coach Ron Bellamy said. “Defensively, they we’re going to grind it. We had too many penalties (11 for 105 yards). Clarkston was going to shorten the game. Our special teams weren’t special today.”

The first half, and much of the second, was filled with mishaps. 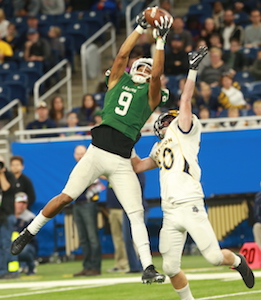 Clarkston, on its second possession, gave up a safety when a fourth-down snap flew over the punter’s head and over the end line.

The Lakers failed to convert a first down on the ensuing possession and their punt went 19 yards, giving Clarkston the ball on West Bloomfield’s 33.

The Wolves did nothing with that gift and lost 10 yards in three plays, and when they punted it went just three yards.

West Bloomfield pieced together the best drive of the half as the Lakers gained three first downs and had a 1st-and-goal at the 5-yard line. But on the next play, Zach Scott grabbed an interception in the end zone.

The longest play of the half was a 35-yard pass from West Bloomfield quarterback Bryce Veasley to A.J. Abbott that gave the Lakers a first down at its 47. On the next play, Cody Hughes recovered a fumble for Clarkston.

Finally, with time running out in the first half, Wolves quarterback Nathan Uballe completed a 15-yard pass to Conner Heaton, and 13 yards was tacked onto that gain as West Bloomfield was called for roughing the passer. With six seconds left, Clarkston opted for a field goal try and Roemer converted from 30 yards out to give the Wolves a 3-2 halftime lead.

That was it for the scoring. Clarkston did its best to work the clock in the second half with its run game, and not make the big mistake.

Clarkston gained 117 yards, 84 on the ground. Its main ball carrier was junior Jacob Billette, who was in the lineup because Clarkston’s best running back, senior Josh Cantu, suffered a knee injury in the Semifinal and was unavailable. Billette rushed for 69 yards on 14 carries.

“We needed someone to run up the middle,” Richardson said. “Billette is a wrestler. He’s a tough kid. He was the answer.”

West Bloomfield had none for Clarkston’s defense. Veasley came in with nearly 3,300 yards and 24 touchdowns passing. On Saturday, he was 15 of 32 for 214 yards and two interceptions, and he was sacked twice.

“We didn’t make enough plays that needed to be made,” Veasley said. “Every time we made a big play, we had a penalty.”

Clarkston blanketed West Bloomfield’s receivers; all are expected to play at a major university. Michael Fluegel, who doubles as a running back and defensive back for Clarkston, said it was a challenge to go against such a talented group.

“All their receivers are really good,” he said. “You just have to make plays. You have to stay with them.”

For Richardson, this was the unlikeliest of titles. His other title teams had some of the state’s top players, like quarterback D.J. Zezula (Wayne State), who threw two touchdown passes in the 2013 Final and passed for one touchdown and ran for another in the 2014 championship game.

“This is very special,” Richardson said. “This team doesn’t have 5-star kids. We don’t have 4-star kids. We’re unselfish. The kids played with a chip on their shoulder. Nobody picked us to win today.”

The MHSAA Playoffs are sponsored by the Michigan Army National Guard.