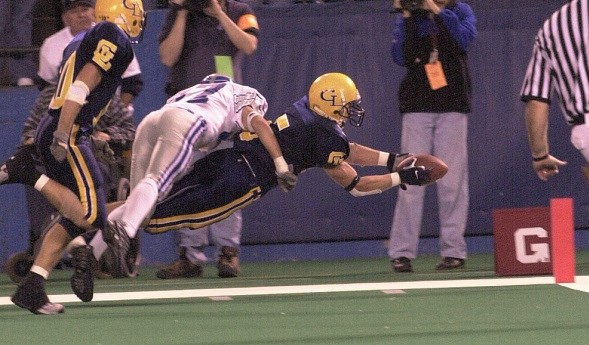 A hop and a wave.

That’s what it took for Grand Ledge to pull off the most unlikely of comebacks in the 2000 Division 1 MHSAA Football title game at the Pontiac Silverdome, doing what no team has ever done – scoring two touchdowns during the final minute to claim a 19-14 victory over Utica Eisenhower.

The game was your typical large-school, heavyweight fight, tied at 7-7 with less than five minutes to play  when Eisenhower’s Chris Hoover broke loose for a 36-yard scoring run.  But Grand Ledge bounced right back, mounting an 80-yard drive following the ensuing kickoff, capped by quarterback Matt Bohnet’s five-yard scramble to the end zone.

With just 53 seconds left on the clock, Comets coach Pat O’Keefe, already known as one of the state’s most successful baseball coaches, decided he had to gamble. Go for two.

“We were tired,” O’Keefe told the Lansing State Journal after the game.  “I thought the momentum was there for us and I didn’t want to play overtime.

“We thought about it a little bit, and I saw it in the kid’s faces. I asked Matt (Bohnet) what he wanted to do and he said, ‘Let’s go for the win.’”

But the conversion play broke down. Bohnet couldn’t find an open receiver and was tackled short of the goal line.

Everyone in the Silverdome knew what was coming next. No one could have seen, however, what was going to happen.

The onside kick by Nick Sandy took a textbook hop, and Colin O’Keefe flew through the air to grab it and give the Comets new life.

Two plays later, Bohnet was scrambling again – and a wide-open Tim George was downfield waving at him. Bohnet connected with George at the 15-yard line, and after shaking off one would-be tackler, George headed for the end zone, finishing with a pylon dive that gave the Comets the lead. It was the second TD catch of the game for George.

“I caught the ball and got bumped,” George told The Detroit News. “I saw the goal line and I knew I had to get there. I didn’t even think about going out of bounds.”

You can watch the final moments of the FOX Sports Detroit coverage of the 2000 Grand Ledge-Utica Eisenhower game below.

PHOTO: Grand Ledge's Tim George dives for the winning touchdown during the final seconds of the 2000 Division 1 Final at the Pontiac Silverdome. (Photo by Gary Shook.)