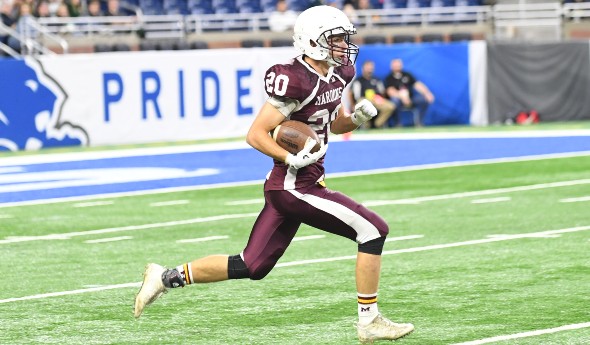 Menominee’s march from the southern tip of the Upper Peninsula to Ford Field had some storybook feel about it – a team which overcame injuries – and mixed in a grinder of a Semifinal victory to bring the  chants of “U.P. Power” to the Motor City and the MHSAA Football Playoff Finals in 2016.

The Maroons’ good fortune ran out that Thanksgiving weekend against a superior Grand Rapids West Catholic squad in the Division 5 championship game, but Menominee’s trip will long be remembered for a state championship game record set during the second half.

Liam Putz, who had earlier in the game set a Finals record with a 47-yard field goal for the Falcons, was lined up to attempt a 42-yard placement midway through the third quarter. Sam Larson broke through and blocked the kick. Hunter Hass picked up the ball with nothing but green turf and yard stripes in front of him and returned it for a touchdown, the first time that had ever happened in the Finals. The return went for 76 yards, which became the record for the special teams play.

“All week we were practicing to block their punt, and it just so happened that we blocked their field goal,” Hass said after the game. “I saw the ball. I just picked it up and ran into the end zone, just trying to get some points to get some momentum going for our team.”