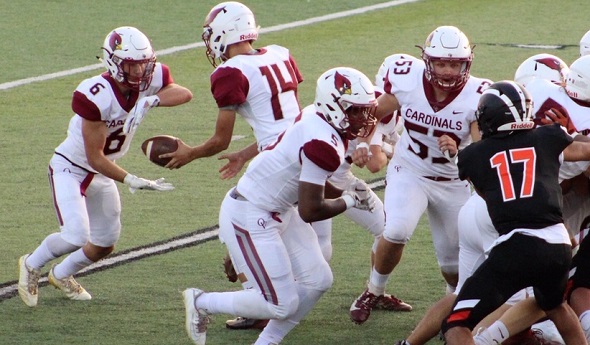 It was far from love at first sight.

When returning Muskegon Orchard View standouts like senior Dayton Rose and junior Owen Swanson first met their new varsity football coach Fred Rademacher back in January, they weren’t so sure what to expect moving forward.

“I was very skeptical,” said Rose, who at 6-foot-2 and 225 pounds was asked to move from tight end back inside to guard in Rademacher’s wing-T offense. “I caught a lot of passes last year, and I really didn’t want to go back to the wing-T.

“Then I told him that I was a second-team all-state punter. He told me: ‘That’s nice, but I don’t punt.’ At that point, I was really wondering about this dude.”

Fast forward to present day, and there’s overflowing mutual admiration between team and coach at this eastern Muskegon County school district, which had emerged as a mid-sized state powerhouse for a solid decade from 1995 to 2005 before falling off the map.

The Cardinals are not only back in the MHSAA Playoffs after a 10-year hiatus, but they returned in style improving from 2-7 last fall to a perfect 9-0 this regular season. OV is ranked No. 2 in Division 4 heading into Friday night’s home showdown against No. 7 Sparta (8-1).

“We have a great senior class,” said Rademacher, whose most recent head coaching job was at Hastings, where he was 44-43 over nine years. “There are 14 seniors that are great football players, and they like to work hard. You add in a coaching staff that has bought in and an administration that is backing us, and it’s a formula for success.” 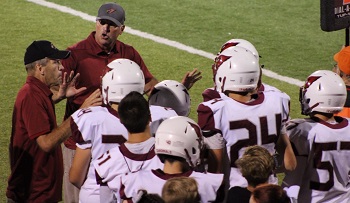 Orchard View opened the season with a hard-fought home win over Spring Lake, then went on the road for three straight weeks – coming home a perfect 4-0 after wins over Kent City, perennial power Muskegon Catholic Central and Belding.

The Cardinals did it on the field by ditching the spread offense and going back to the wing-T, which they ran to so much success under John Shillito (making the MHSAA Finals in 1995 and 1999) and Matt McDonald (winning the school’s lone championship, in Division 4 in 2004).

Rose, a dominating pulling guard, is one of six seniors among the starting front seven on offense – with the only underclassmen junior guard Jayshawn Sandin-Davis. The other starters up front are center Jordan Tuttle, tackles Dominic Baushke and Xavier Ruiz and ends AJ Herrera and Hayden Stanfield.

The ground game is keyed by the 1-2 punch of shifty junior fullback Brendan Hyatt and bruising senior halfback Edmari Mitchell, along with regular subs in senior Alex Andrews and sophomore Darius Williams.

“I like my backs to be unselfish,” said Rademacher, 51, who was an assistant at East Kentwood for four years under Shillito before taking the Hastings job. “They have adopted my viewpoint that it doesn’t really matter who scores the touchdown as long as we score a touchdown.”

The trigger man for the Cardinals is Swanson, who has done an admirable job distributing the ball and carrying out all of the fakes that are an integral part of the wing-T. He has been deadly on keeper runs, and his strong arm adds another dimension to the attack – which may be required to win a loaded District that also includes Grand Rapids Catholic Central, which has won two Division 4 titles over the past three years. 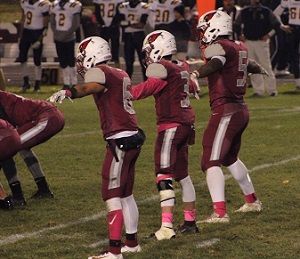 “I love to throw the ball, like any quarterback, so I wasn’t real happy at first about the new offense,” said Swanson, who plays four sports – football, basketball, bowling and baseball. “But going 9-0 makes up for everything.”

The Cardinals capped their turnaround tale with a 32-20 home victory last week over North Muskegon. OV raced out to a 24-0 lead in that game, before NM rallied back behind the arm of senior quarterback John Hayhurst.

Rose, the leader of the Cardinals’ defense at middle linebacker, knows that unit is going to have to play much better pass defense against Sparta, which is led by four-year starting quarterback Jakel Davis.

The secondary of Hyatt and Andrews at safety and Brendan Nelson and Williams at cornerback will be put to the test, both in coverage and in knowing when to come up and fill on keeper runs.

True to his coach’s word, Rose has punted just three times the entire season, as Rademacher has chosen to go for it on fourth down from all over the field.

Rose said he and his teammates have come to understand that there is a method to their new coach’s madness, and that belief has produced a new-found confidence in the OV program. Rademacher got a head start on preparation this week, skipping the team’s playoff selection show watch party Sunday to map out this week’s practice plan.

“He’s a little weird, and it takes awhile to get to know him,” concedes Rose, who hopes to continue playing football at the Division II or Division III college level next year. “I mean, we have no music at our practices and he doesn’t get any of our jokes. He is the definition of an old man. But hey, we’re winning.”

PHOTOS: (Top) Senior guard Dayton Rose pulls down the line as Alex Andrews gets a handoff from quarterback Owen Swanson during Orchard View’s 42-35 win at Belding on Sept. 20. (Middle) First-year coach Fred Rademacher (gray hat) talks to his team during that Cardinals' win. (Below) Orchard View is back to playing wing-T football as the backfield, from left, of Alex Andrews, Brendan Hyatt and Edmari Mitchell get their proper spacing before a play during a 32-20 win over visiting North Muskegon on Oct. 25. (Photos by Katie Ream.)