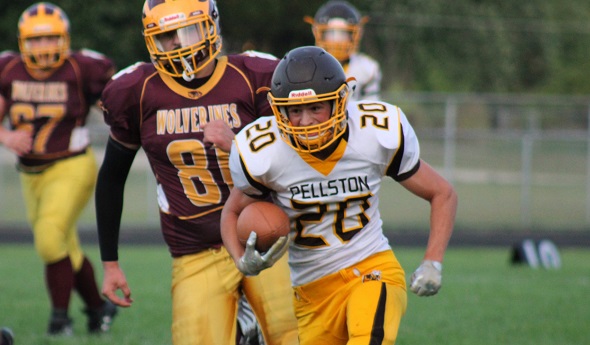 PELLSTON — It’s a story that could easily derive from Hollywood.

Only, this script is being written in Pellston.

Leading up to the 2019 season, the narrative for the Pellston football team has been mostly a tale of woe.

Twenty-three years without a winning season.

This year, however, the plot has turned into a feel-good story as the Hornets have put together a season that’s only been dreamed about over the years, posting an 8-1 record and earning their first postseason berth.

“To go 8-1, it was great,” said Pellston head coach Jack Carter, a 1987 graduate of the school. “I knew we had some really good players, some great seniors. Strong leadership on that end. It all kind of came together for us, at least through the regular season. I don’t know if it’s being a miracle worker as much as we’re at the right place at the right time.”

Pellston quarterback Glenn Bonter is one of those seniors. Bonter moved to town two years ago from Grand Haven and immediately found his niche within the confines of the weight room. The other players who were there made him feel welcome, and they quickly became friends. They also filled him in on the school’s history in football.

“(I heard) that it was a struggle,” said Bonter. “That they hadn’t had a whole lot of success. That was something where we looked at it and all of us wanted it to change. Looking around in the weight room, I saw how much hard work and dedication kids were really putting into it. Pretty much the whole entire team would go to weight room in the summer. We would all go out to the field and just pass and do some running. I think it was a whole team thing. We were like, ‘You know what? We want to win, and we’re going to do it.’ We just kind of put our foot down and went for it.”

Carter is in just his third year leading the Hornets, though he is well-versed in how difficult it has been for the school to win on the football field having off-and-on been a part of the program in one capacity or another since 2001. He’s seen players and coaches come and go, working to get things heading in the right direction but often finding that to be an insurmountable hurdle. 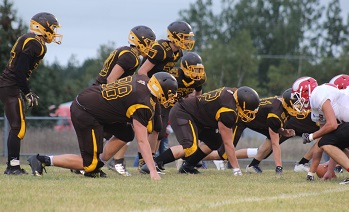 “If you look at it strictly from wins and losses, it wouldn’t tell the complete story because we have not been that great,” said Carter. “But we’ve had, every single year, guys that went out there and worked so hard. Played with as much heart and emotion as you could expect. For me, I think that was the template, or the groundwork for us to build off.”

Pellston also laid some of the foundation for this season during last year’s 4-5 campaign. What might seem like a rebuilding year for some was a breakthrough for the Hornets. It was the most wins they had recorded in six years. Three of those wins came in succession, too — the first time the program had strung together consecutive victories since it opened the 2012 season with four straight victories.

That propelled the Hornets into the offseason with a ton of hunger. The team’s four seniors — Bonter, running back/defensive back Lakota Worthington, and linemen Evan Cameron and Joey Rizzardi — spearheaded the team’s participation in summer training. When the full squad met for the first time in August, it came in with good fitness, strength, talent and desire.

It didn’t take long for Pellston to reap the benefits of its hard work as it started the year with six wins in a row — the longest winning streak in school history. Among those victories were dramatic triumphs over Posen (42-38) and Au Gres-Sims (32-30) where the Hornets overcame halftime deficits of 16 and 18 points, respectively, to remain undefeated.

“Normally you just don’t come back from those type of deficits,” said Carter. “This group of guys, they just keep fighting. They keep believing, and they keep their heads up. Their positive outlook and attitude is first rate.”

“For us to rally back and win those games, it was unbelievable,” said Bonter.

Three games into his junior season, Bonter switched from running back to quarterback. He’s been dynamic in running the Hornets’ spread offense, accounting for 16 touchdowns rushing and 13 through the air. Junior David Jamroz, like Bonter, has rushed for more than 1,000 yards. Worthington joins them in a backfield that features a great deal of speed. He also provides electricity in the return game.

“(He’s a) special returner,” Carter said of Worthington, a four-year varsity player. “He’s been that sparkplug and that catalyst that we’ve been needing for quite a while. In 8-man football a lot of times teams choose not to really kick to guys who are like that. It seems like every time a ball did go to him, he made the most of it. If he didn’t get a touchdown out of it, he certainly flipped the field for us and gave us great starting position on offense.”

The Hornets have averaged 46 points per game. The only time they’ve been held under 30 points was a 38-14 loss to Hillman in the seventh week, a game where injuries hampered Pellston’s chances.

“I think we just had an off night,” said Bonter. “They’re a really good football team. A lot of respect to Hillman. They should go far; but yeah, that was a tough loss.” 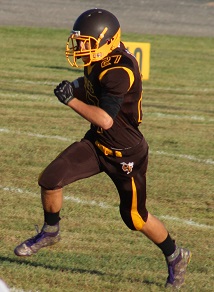 “We learned that sometimes only going in with 11 players can get you in trouble,” said Carter. “We did get hit with some injuries that night. Secondly, Hillman was the first team that really came out and really played good, sound, hard-hitting football, especially on the defensive side. They have a history of being able to make the playoffs, and they’ve had success in football. They showed why they’re at where they’re at.”

The Hornets were able to rebound and finished the regular season with a pair of convincing wins over St. Helen Charlton Heston and Central Lake.

If the current football playoff system was in place in 1995, Pellston wouldn’t have had to wait until this season to gain its first postseason bid. That year the Hornets went 8-1 but did not qualify because they ultimately didn’t have enough playoff points.

Twenty-four years later Pellston finally buzzed its way into the postseason. It opens the MHSAA 8-player Division 1 tournament with a Pre-Regional on Friday against Gaylord St. Mary.

“I’m so ready. I’m ready today,” said Worthington. “I just want to go out there and show everybody what we can do. I know Gaylord (St. Mary) is pretty good, but I’m ready to get them.”

The Snowbirds come into the game with a 4-5 record, but four of their first six wins were forfeited for using an ineligible player.

As magical as this season has been for the Hornets, they feel like there is still more of the story to be told and are looking to add a few more chapters in the coming weeks as the playoff scenario unfolds.

“Hopefully we have a good Hollywood ending with it and keep it going into the playoffs,” said Carter.

PHOTOS: (Top) Pellston’s David Jamroz (20) races through the Au Gres-Sims defense during a Week 3 win. (Middle) The Hornets stack the line during a Week 2 victory over Posen. (Photos courtesy of the Pellston athletic department.)